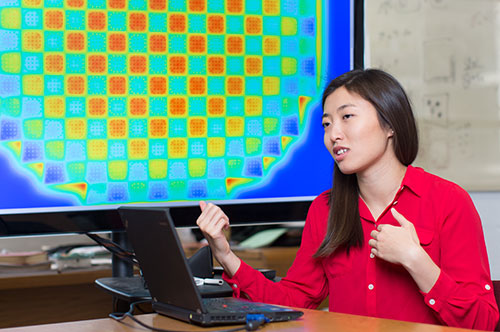 Lulu Li: Modeling the maelstrom inside a reactor

The frenetic dance of neutrons inside a nuclear reactor generates heat and produces electricity. Reactor physicist Lulu Li wants to make sense of this kinetic choreography, with the ultimate goal, she says, of “making nuclear reactors safer, more reliable and economical to operate.” A fourth year doctoral student and member of the Department of Nuclear Science and Engineering’s Computational Reactor Physics Group (CRPG), Li is developing precise and detailed simulations of neutron behavior that could have a major impact on current and future generations of nuclear reactors.

Under the direction of faculty advisors Professors Kord Smith and Benoit Forget, Li has created a new method for accelerating the solution of neutron transport equations — mathematical characterizations of the movements made by neutrons in time and space from the moment the first atom of nuclear fuel undergoes fission. “We want to know how many neutrons there are, where they’re going, and with what energy and velocity,” says Li.

Li and her colleagues’ mathematical simulations are intended to reduce uncertainties in nuclear plants, which must operate within strict safety limits. More accurate models of neutron behavior will give plant designers a better way of characterizing the safety limits of current and new designs, thus improving fuel efficiency and operations. “The better we understand things inside, the more economic value we can get out of a reactor,” says Li.

While equations have long existed for modeling neutrons, recent advances in computing power now make possible much faster fine-grained mathematical simulations. “Supercomputers enable us to develop methods that were not previously possible to execute, and to accomplish them in a reasonable timeframe,” says Li.

With two other graduate students, Li created a new modeling platform, called the open-source Method of Characteristics neutron transport code (OpenMOC), which was published in the June 14 2014 Annals of Nuclear Energy. She presented research related to this platform at the U.S. Department of Energy’s Consortium for Advanced Simulation of Light Wave Reactors, where she won the best poster award at its 2014 workshop.

Li’s interest in devising algorithms for accelerating reactor simulations emerged after a summer internship in 2009 following her sophomore year at Rhodes College in Tennessee. A physics major, she applied for an internship with MIT’s Department of Nuclear Science and Engineering. “Back then, I confused nuclear engineering and nuclear physics, so I came here with the wrong assumption.” It turned out to be a happy mistake for Li.

“People in the department here were extremely friendly, and taught me stuff from scratch,” she recounts. “I knew how to perform tasks on the computer, but nothing about theory, and over the summer they helped me catch up.” Li also met the research group she works with now, which led to a second internship the following summer. “They were amazing mentors, passionate and really patient with me. That’s what ultimately helped me decide what to do.”

Li completed her undergraduate education in physics at the University of Illinois, Champaign-Urbana, where she found a calling in computational programming. “I tried the experimental stuff, but realized I was no good at it,” she says. “I was never a hands-on person.” During a childhood attempt to add physical memory to a computer, Li recalls smoke billowing from the machine. “I went into mathematical simulations because you don’t have anything to break, and with the computer, you can undo any previous versions of your work,” says Li. “It totally fits who I am.”

For her dissertation, Li is harnessing supercomputers to model neutron behavior in full-scale nuclear reactors. Her algorithms are intended to predict with high fidelity the behavior of individual neutrons caroming off the tiny pellets of fissile fuel material that comprise nuclear fuel assemblies. With novel reactor concepts under development and the rising costs of experimental facilities, Li’s algorithms aid the analysis and optimization of designs at a very fundamental level.

After she receives her Ph.D., Li is aiming for a job with industry, where she hopes to put her computations to use with the current fleet of light water reactors, and next generation plants as well. “I’d like to inform people who develop new reactors,” she says. “Simulation is the first-stage test bed that opens up a design space.”

“I’d like to inform people who develop new reactors. Simulation is the first-stage test bed that opens up a design space.”