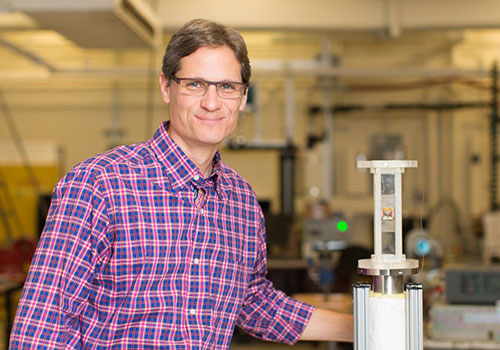 Thomas J. McKrell: A passion for learning in the lab

By his own account, Thomas J. McKrell chose “a course in life as an experimentalist.” A research scientist in the Department of Nuclear Science and Engineering (NSE) since 2006, McKrell designs, builds, and supervises laboratory projects, and readies students for careers in research. It’s a position that demands a broad technical skillset, creative problem solving, and collaborative inclinations—aptitudes he began developing quite early.

“Starting in elementary school, I repaired everything around the house with my father,” recalls McKrell. “I had a natural curiosity for how things work.” His dad, an engineer, detected McKrell’s mechanical talent, and put him to work fixing the family’s cars, and later, wiring and plumbing, and programming home computers. McKrell realized he had “a passion to always be learning.”

Today, McKrell purposefully channels this passion, as director of the Thermal Hydraulics and Materials in Extreme Environments Laboratory at the Center for Advanced Nuclear Energy Systems. Here, in partnership with faculty, visiting scientists, and students, he serves as investigator and supervisor on an array of research ventures. His current portfolio includes projects to enhance heat transfer through nano-engineering; develop accident-tolerant nuclear fuel cladding; and investigate boiling surfaces using novel technologies.

It’s not simply the variety of research topics that appeals to McKrell. He also enjoys the challenge of integrating multiple disciplines, a challenge for which he comes well qualified. He earned a B.S. in mechanical engineering from the University of New Hampshire, and then gained both an M.S. and Ph.D. in materials science at the University of Connecticut.

As a graduate student, he was in the vanguard of nanoresearch, studying corrosion in metal at the atomic scale. “I saw there would be a revolution in what we could achieve with new materials,” he says. Later, as a consultant for Altran North America, he applied his multidisciplinary engineering expertise at nano- and macro-scales, troubleshooting failures in power plants throughout the country.

It was while investigating cracks in steam generator tubes in a nuclear power plant that McKrell realized he might have found his calling. “In this nuclear-related work, I felt all my education was paying off.”  He also welcomed the opportunity to advance the cause of clean energy.

Invited to apply for a research position with NSE, McKrell leapt. Nearly a decade later, he brings his wide-ranging, multidisciplinary experimental background to bear on research that promises to have major impacts on the nuclear energy industry and other sectors.

In one project with Jacopo Buongiorno, professor of nuclear science and engineering, McKrell is developing advanced tools to interrogate the boiling surfaces in nuclear reactors. His lab has designed innovative heaters that when coupled with infrared cameras detect surface temperatures inside these cauldrons at 20 micron intervals. “We can essentially establish the thermal footprint of single bubbles, and determine their morphology and kinetics over a large area,” says McKrell. “These are state-of-the-art diagnostic techniques that completely quantify heat transfer on a surface allowing for the validation and development of boiling models.”

This research, which has drawn $700 thousand in funding from the French Commissariat à l'énergie atomique (CEA) and other sources, ultimately reducing uncertainties in predicting safety margins for current and future generations of nuclear reactors.

Other projects involve examining corrosion products circulating in reactor fluid that build up on fuel rods, diminishing their efficiency; developing oxide coatings that allow heat to escape through the bottom of a reactor vessel, rather than remain trapped inside, reducing the chances of melting metal in the case of a severe accident; evaluating the performance of novel accident tolerant nuclear fuel claddings under severe accident conditions; and measuring the optical properties of molten salts.

McKrell’s lab is also a teaching environment.  His research projects involve training and supervising 20 or more post-doctoral, graduate and undergraduate students. “They come in with the mentality that anything’s possible,” he says. “I like to let them run with it, because great things can come out of crazy ideas.”   McKrell directs students’ creative flow into “building a great deal of custom experimental facilities,” he says, because “we must constantly overcome material limitations.”

McKrell finds it “extremely rewarding” helping students learn how to structure experiments, formulate and solve the right questions, report on research, and, as NSE’s EHS Co-Coordinator, work safely in the lab—“all preparation for the real world,” he says. “When our students leave, for academia, national labs or industry, they’re ready to lead a project,” he says.

Although he admits mentoring could easily monopolize his days, McKrell continues to carve out time for research collaborations on problems that intrigue him, especially those with significant potential impacts. At MIT, he says, “I’ve been able to contribute to the clean energy sector more than that inquisitive child could have ever imagined.”