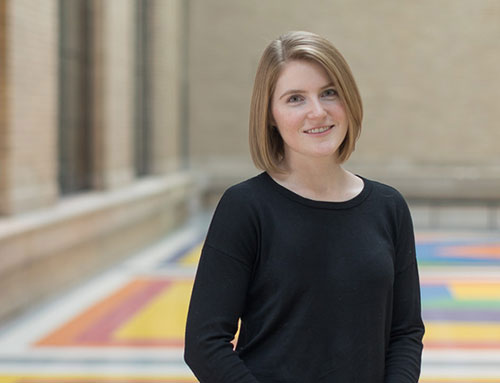 Nuclear Science and Engineering senior Caroline Colbert has found herself on an unexpected career path in the medical field.

During January of her junior year at MIT, Caroline Colbert chose to do a winter externship at Massachusetts General Hospital. Her job was to shadow the radiation oncology staff, including the doctors that care for patients and medical physicists that design radiation treatment plans.

Colbert, now a senior in the Department of Nuclear Science and Engineering, had expected to pursue a career in nuclear power. But after working in a medical environment, she changed her plans.

She stayed at MGH to work on building a model to automate the generation of treatment plans for patients who will undergo a form of radiation therapy called volumetric-modulated arc therapy (VMAT). The work was so interesting that she is still involved with it and has now decided to pursue a doctoral degree in medical physics, a field that allows her to blend her training in nuclear science and engineering with her interest in medical technologies.

She’s even zoomed in on schools with programs that have accreditation from the Commission on accreditation of Medical Physics Graduate Programs (CAMPEP) so she’ll have the option of having a more direct impact on patients. “I don’t know yet if I’ll be more interested in clinical work, research, or both,” she says. “But my hope is to work in a hospital setting.”

Many NSE students and faculty focus on nuclear energy technologies. But, says Colbert, “the department is really supportive of students who want to go into other industries.”

It was as a middle school student that Colbert first became interested in engineering. Later, in a chemistry class, a lesson about nuclear decay set her on a path towards nuclear science and engineering. “I thought it was so cool that one element can turn into another,” she says. “You think of elements as the fundamental building blocks of the physical world.”

Colbert’s parents, both from the Boston area, had encouraged her to apply to MIT. They also encouraged her towards the medical field. “They loved the idea of me being a doctor, and then when I decided on nuclear engineering, they wanted me to look into medical physics,” she says. “I was trying to make my own way. But when I did look seriously into medical physics, I had to admit that my parents were right.”

At MGH, Colbert’s work began with searching for practical ways to improve the generation of VMAT treatment plans. As with another form of radiation therapy called intensity-modulated radiation therapy (IMRT), the technology focuses radiation doses on the tumor and away from the healthy tissue surrounding it. The more accurate the dosing, the fewer side effects patients have after therapy.

With VMAT, a main challenge is in devising an accurate individualized treatment plan. Each plan is customized specifically to the patient’s anatomy. This design process is well defined for IMRT, which uses a set of intersecting beams to deliver radiation. VMAT also intersects beams but rotates them around the patient. “There are more degrees of freedom, so it should provide more accurate treatment, but it’s also more computationally difficult to optimize an individual treatment plan,” says Colbert.

Colbert spent the second half of her junior year developing improved algorithms under the supervision of Michael Young, a medical physics doctoral student at the University of Massachusetts and a research assistant at MGH. The idea was to use existing IMRT plans from anatomically similar patients as a starting point for developing a customized VMAT plan. “We needed to start the optimization algorithm in a place that was already good enough and would only get better from there,” she says.

Her work involved helping to build a database of existing IMRT radiation therapy plans used to treat MGH patients. She then worked on determining the search criteria required to pull the best information from the database to seed a starter plan that is primed for optimization for VMAT. The work drew on Colbert’s side-interest in computer science, which had grown out of a programming course she’d taken during an earlier January session at MIT.

Colbert has continued to work on this project for her senior thesis. She has also worked with Young to document findings from another project in a paper that will appear in the Journal of Applied Clinical Medical Physics in 2016.

Prior to her work at MGH, Colbert had done a summer internship in the nuclear energy field working on nuclear fuel cycle technologies at the United States Department of Energy. During her explorations of different professional fields, her advisor, Michael Short, assistant professor of nuclear science and engineering, has been a supportive and helpful resource. “The department allows students to craft their own path through nuclear science and engineering,” says Colbert.

“My parents loved the idea of me being a doctor, and then when I decided on nuclear engineering, they wanted me to look into medical physics”