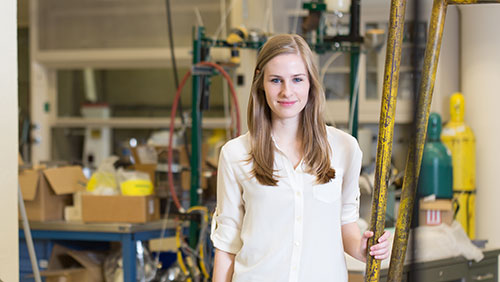 Nuclear Science and Engineering doctoral student Carolyn Coyle ’13 SM ’16 specializes in the corrosive particle build-up found on primary components of nuclear reactors, known by its apt acronym, CRUD (for Chalk River Unidentified Deposits). The substance is a common byproduct of reactor operation, yet its impacts on reactor function have not yet been carefully elucidated.

Coyle’s research, part of a larger effort to improve reactor safety and efficiency, aims to bring CRUD out of the shadows. It is work, she says, that “integrates everything that I am most excited about.”

Her primary interest involves engineering properties of surfaces on materials used in heating, such as metals tailored for nuclear fuel rods. Different surfaces affect how such materials transfer heat to surrounding fluid, producing different kinds of bubbling and boiling. “One characteristic we like in nuclear engineering is a hydrophilic surface,” she says. This means water is attracted to the surface and will maximize its contact with the top layer of the material.

This property is crucial, because it helps delay a condition nuclear engineers really want to avoid, called critical heat flux (CHF). Without surface rewetting, a thin film of vapor forms, “coating the entire surface of the material, trapping heat, and the surface temperature shoots up, potentially causing failures,” says Coyle.

In research she began as an undergraduate, working in the Reactor Hydraulics Laboratory under the supervision of NSE’s Jacopo Buongiorno and Thomas McKrell, Coyle learned nano- and microfabrication techniques to engineer custom surfaces. She fabricated surfaces with different porosity, wettability, and roughness on indium tin oxide-sapphire material, then tested these surfaces in a pool to vet their boiling behaviors. The results, published in Applied Physics Letters in 2013, demonstrated that “a porous, hydrophilic surface was the best way to enhance boiling, to prolong a happy, bubbling regime.”

It was this project that sold Coyle on pursuing nuclear engineering. “I loved the research so much, because it combined my passion for building and creating things, and my interest with thermal fluids analysis, design of experiments, understanding and using physics to create better, cleaner, safer energy,” she says.

This same work led to Coyle’s focus on CRUD. The substance, which accumulates over time as metallic reactor components corrode, “happens to be a naturally occurring porous hydrophilic surface,” says Coyle. “And there had not been a lot of research on how it affects heat transfer and boiling performance of fuel rods.”

Since it was impossible to perform experiments on radioactive fuel rods coated with CRUD, Coyle and her team decided to test synthetic versions of CRUD in a laboratory setting to see if it might improve boiling performance and delay the onset of CHF.

So Coyle set out to design her own CRUD, using photolithography and layer-by-layer deposition to create the porous surface. She dotted indium tin oxide with an ultraviolet light-sensitive polymer using a mask, like a stencil, to imprint different micro-sized post patterns on the surface. She then dipped the surfaces in a silicon oxide nanoparticle solution to create the porous, hydrophilic surface. Finally, the post pattern was removed to create tiny heat escape hatches called chimneys that exist in naturally occurring CRUD.

“Creating synthetic CRUD is exciting, because you can control different aspects of the engineering process—the thickness of the CRUD deposition, chimney patterns, size of chimneys—to achieve different results, she says.

After testing these synthetic CRUD surfaces in a flow boiling loop that replicated a reactor flow environment, Coyle got the results she’d hoped for: consistent hydrophilic porous layers improve boiling, and surfaces with boiling chimneys enhance boiling even more.

Coyle’s master’s research resulted in an award-winning paper, “Synthesis of CRUD and its Effects on Pool and Subcooled Flow Boiling,” presented at a 2016 Nuclear Reactor Thermalhydraulics conference. “I’ve gotten a lot of positive feedback.” She is especially heartened that her research made a positive contribution to the mission of her project's sponsor, the Consortium for Advanced Simulation of Light Water Reactors (CASL), of which MIT is a member.

“Doing experiments in nuclear applications can be very expensive and one way to improve efficiency and safety and reduce the costs of nuclear reactors is through better modeling,” Coyle says. “If we can design an ideal reactor, and improve heat transfer in the reactor core, we can do a better job of building reactors in the future.” Coyle’s novel research, implementing her own process to create and test synthetic CRUD, may advance these goals.

While she has not yet identified her doctoral research focus, Coyle is sure that it will involve nuclear thermal hydraulics. “Heat transfer problems are really interesting to me, and I especially like the applications in energy,” she says. While Coyle took a brief time out from her MIT studies late last year to intern with SpaceX (working on the Falcon 9 rocket), she is committed to pursuing nuclear engineering.

“I love the positive environmental impact of nuclear engineering,” she says. “With the effects of climate change increasingly apparent, we need young people to contribute and help us move forward.”

“I love the positive environmental impact of nuclear engineering... With the effects of climate change increasingly apparent, we need young people to contribute and help us move forward.”