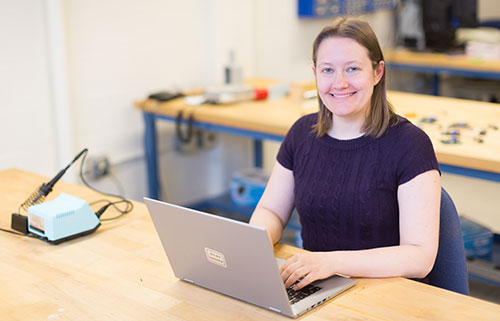 Along her arduous journey to earning her doctorate in the Department of Nuclear Science and Engineering (NSE), Becky Romatoski ’06 says she has learned that — in both work and life — “it is all about fit and timing.”

“That is what it comes down to in the end,” she says.

Today Romatoski is putting the final touches on research involving fluoride-salt-cooled, high-temperature test reactors (FHRs). Still in the design stage, FHRs offer the potential for generating nuclear energy with greater safety and efficiency than reactors currently in operation. Under the supervision of MIT Nuclear Reactor Laboratory Director of Research and Services Lin-wen Hu, Romatoski has developed a methodology for analyzing the uncertainty of key properties in FHRs.

Her work is an essential piece of a larger project conceived by Hu, NSE Principal Research Scientist Charles W. Forsberg SM ’71 ScD ’74, and investigators from the University of California at Berkeley, and the University of Wisconsin at Madison. The team intends to demonstrate that FHRs are not only much less prone to accidents, but can yield much higher revenues than conventional water-cooled reactors, in part because they can use natural gas when power demands peak.

“FHR has a unique business model,” says Romatoski. “It can respond quickly to peaks in electricity demand by injecting natural gas or stored energy — it’s essentially a 2-in-1 concept.”

This project, to which she brings knowledge of both the technical and commercial dimensions of the nuclear energy industry, is not one in which she initially expected to be involved. “When I got my master’s degree I was more interested in fusion power,” she admits.

But when she arrived at MIT for graduate school, Romatoski learned about the FHR initiative and was hooked.

“I really liked the concept of a design totally unlike the water-cooled reactors we have everywhere, and I realized that I wanted to work on something that was more immediate and applied than fusion,” she says. “I had been patiently waiting for a project that would fit my interests, and found something that was exciting.”

Romatoski is very familiar with waiting. At the end of her first year as a master’s degree student at the University of Illinois at Urbana-Champaign, she discovered she had breast cancer, and struggled to pursue her degree through her treatments. It ended up taking her an extra year. “Everything that happened during that time is hazy,” she says.

She nevertheless secured a summer internship at a nuclear power plant and then ended up working with a firm that evaluated and helped prepare licenses for nuclear power facilities.

When she arrived at MIT, she didn’t have a clear research focus, although she knew she wanted eventually to go into academia.  “Coming back to graduate school for me was more about learning more, and becoming a professor,” she says.

With an undergraduate background in mechanical engineering, she was drawn to an MIT graduate design class, where she found herself engaged by both the neutronics and thermal hydraulics involved in nuclear reactor technology. This experience, combined with her expertise in computer coding and plant licensing, made her a natural fit for the FHR project.

For MIT’s own version of an FHR, Romatoski has focused on salt coolant property uncertainties, and what effects they might have on reactor operation. “So we’ve been looking at density, thermal conductivity, viscosity, and heat capacity,” she says. These properties are central to the flow and function of coolant fluid in a reactor.  Romatoski also conducted a literature review to determine what was known about some of these properties, which, she says, “have high uncertainty compared to water, the conventional nuclear reactor coolant, and about which we know a great deal.”

The advantage of fluoride salt is that it can absorb and utilize the tremendous heat of nuclear reactions, enabling reactors to function at much higher temperatures than water coolants. But as Romatoski discovered, uncertainties about fluoride salt’s properties run between 2 and 20 percent.

“My task was to figure out how we could take into account these uncertainties and design a reactor that would still operate safely,” says Romatoski.

Her novel analysis involved creating a computational matrix incorporating fluoride coolant properties and methods, as well as two different FHR test reactor designs: one using pebble fuel, a concept under development at Berkeley and in China; and a prismatic design adopted by MIT and other groups. Her work greatly benefited from the experience of the Nuclear Reactor Laboratory staff, who analyze and license the 6 megawatt MIT Nuclear Research Reactor.

She discovered that some thermophysical property uncertainties would likely prove more important than others for reactor design. “Thermal conductivity is number one, and while viscosity has the highest uncertainty, it plays the smallest part in heat transfer,” she says.

The findings from her research, she says, “are general enough to provide useful insights” for teams pursuing either kind of reactor design. The prismatic design might prove more flexible, offering more precise control over the fuel. But examined through the lens of coolant property uncertainties, the pebble bed design appears to be more forgiving.

After finalizing her doctoral work, Romatoski is headed for a new life as an assistant professor of mechanical engineering at St. Ambrose University in Davenport, Iowa.  A second bout with cancer, as well as the birth of a child, has left her determined to make the most of her free time.

“A lot has happened in my life, and I want to do something where I have flexibility,” she says.

One way she hopes to spend her free time after moving to the Midwest is engaging in climate change activism. At MIT, her interest in energy expanded beyond nuclear power, and she participated in fossil fuel divestment campaigns and actions promoting wind energy.

“There is fear about the future and a bit of desperation and frustration in the direction we’ve been heading,” she says. “I hope to be working on a variety of fronts toward clean energy, and when we move to Davenport, I will see if there are ways to get my whole family engaged.”