A paired passion for pushing boundaries 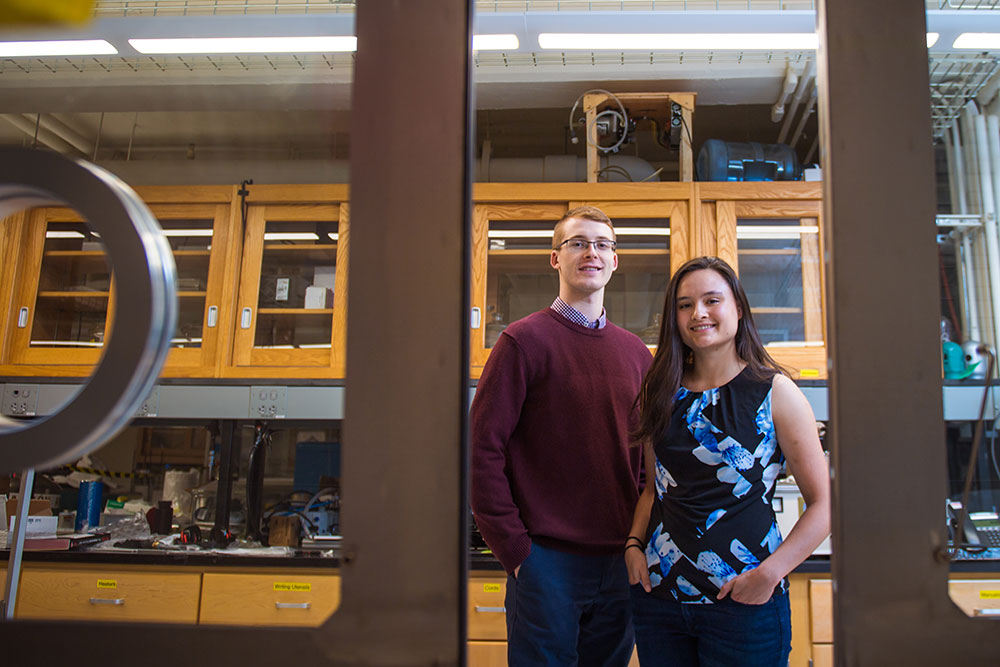 Funded by the National Science Foundation, this project intends to develop nothing less than a universal measure for assessing the atomic-scale damage in metals that govern their useful engineering properties.

“Metals are among our most important structural materials, providing the backbone to everything from buildings to bridges, and windmills to nuclear reactors,” says Short. “If we had a universal way to measure damage, we would be able to better predict when metals would fail, measure their degradation during service, and design new metals to be both longer-lasting and more economical.”

Short’s novel approach involves measuring the “energy fingerprint” of a metal in a way that reflects its internalized damage. The group’s immediate interest is in seeing if it can help the nuclear-power industry determine the safety condition of reactor components, or determine of the historical usage of uranium-enrichment centrifuges for verifying international nuclear-nonproliferation treaties. While these potential applications inspire Hirst and Connick, they are equally energized by the challenge of advancing basic science.

“Revealing and understanding mechanisms inside materials, being able to say this is why properties are changing, really excites me,” says Hirst, who earned undergraduate and master’s degrees in materials science from the University of Oxford. Connick, a mechanical engineering and nuclear engineering major from the University of California, Berkeley adds: “I like how we’re researching a new idea people haven’t tried before—that feeling of exploring the unknown.”

For Hirst, doctoral studies at MIT represent the latest phase of an academic journey in search of new frontiers. As a high school student growing up in the Yorkshire Dales, Hirst loved physics, especially when it involved strange phenomena. “During my final year of high school, I conducted a solo project looking at a fluid that behaved like a solid in response to a force, and I loved exploring something outside the realms of normal behavior.”

He decided to go into materials science, after reading an article about designing a material that is harder than diamonds. “I liked the idea of pushing boundaries,” he says. “The reason why I’m in nuclear science is because it’s the most demanding environment possible for materials.”

A native Californian, Connick grew up with a knack for science, Tae Kwon Do, and handicrafts. With a family full of engineers and scientists, she quite naturally fell into mechanical engineering, she says.  But a college course in nuclear engineering, with its “unexplored problems and new frontiers everywhere” intrigued her, she says. She was particularly intrigued by the field after participating in research with a group exploring at nanoscale the hardness of materials useful in nuclear applications. “I liked that it was very hands on,” says Connick.

She decided to pursue nuclear engineering in graduate school, and a visit to MIT sealed the deal. “After talking with Mike Short, who gets very excited about his work, I felt like it just clicked for me,” she says. “This is where I wanted to be.”

Both students are now hard at work proving the validity of Short’s fingerprinting approach. Hirst is focused on experiments, computer simulations, and microscopy that will create an integrated picture of what happens on the smallest scale to metals when subjected to radiation damage. Connick, while also developing quantitative measurements of damage to metals, is trying to determine whether it is possible to apply such research in applications that rely on measuring minute changes in radiation damage.

Typical of the start of any novel and sophisticated experimental effort, they are confronting a range of challenges.

“I’ve put in over 100 hours just refining my sample preparation,” says Hirst, who is working with a nanocalorimeter to determine how much energy can be released from a microchip scale metal sample (less than a millionth of a gram) that he has cut using a focused ion beam. “It’s heart in mouth with this tiny sample delicately poised on the end of a needle, and it sometimes sails away into the abyss.”

By repeatedly heating up and cooling both perfect and radiation-damaged metal samples, Hirst aims to determine the characteristic energy fingerprint caused by the radiation damage. “The signal is how much energy is released or consumed by the materials, which registers as peak or trough on the computer readout,” he says. He is also using electron microscopy and computer modeling to corroborate calorimeter results, and connect defects to structural changes in samples.

Hirst has been rapidly refining his technique, and now says, “I think we’re on the brink of a breakthrough.” Soon, he believes, energy measurements of samples will become reliable and accurate, enabling researchers to link energy fingerprints to specific kinds of damage and potentially to predict what has happened, or might happen, to metals employed in specific applications.

“Imagine taking a tiny scraping from a component of a nuclear reactor that’s been in operation for 50 years, and measuring its energy fingerprint,” says Hirst. “We could determine if a defect exists that suggests the material is brittle, and might shatter in an accident, or if the material is doing as well as when the reactor first started, and confidently say it can perform well for another 20 years.”

Connick is testing Short’s energy fingerprinting approach in a different domain, one with equally high stakes. With a calorimeter equipped for larger-size samples, she is measuring energy signatures of materials in which irradiation transforms the materials’ physical properties.

“For my side of the project, instead of studying defects I’m studying the energetic character of material,” she says. “A small amount of radiation can change a material’s properties, which changes its energy signature, so if we can quantify both the properties and related change in energy signature, we can eventually work backward to determine how much radiation was necessary to cause a change in a material.”

If she can reliably demonstrate this connection with high sensitivity, it would be possible to verify if a centrifuge has been used to make weapons-grade uranium for a nuclear weapons program. This kind of science would prove extremely useful in disarmament and nonproliferation applications.

Although they are increasingly focused on different aspects of research, Hirst and Connick nevertheless regard each other as collaborators. “We’re sounding boards for each other’s ideas,” says Connick. “It’s nice to be able to talk with someone who is extremely knowledgeable about the project, but not an advisor.”

It helps that they share not just a love of tactile experimentation and exploration of the unknown but a dream of conducting materials science research one day for a national lab. Recently, Connick took up one of Hirst’s favorite activities for kicking back after a long day at the lab: ballroom dancing. “We’re learning everything—the swing, tango, foxtrot, waltz and cha cha,” says Connick.  “But Charlie is in multiple tiers above me.”  On MIT’s ballroom dance team, Hirst says, “Time is precious; it’s mainly work, ballroom, and repeat.”