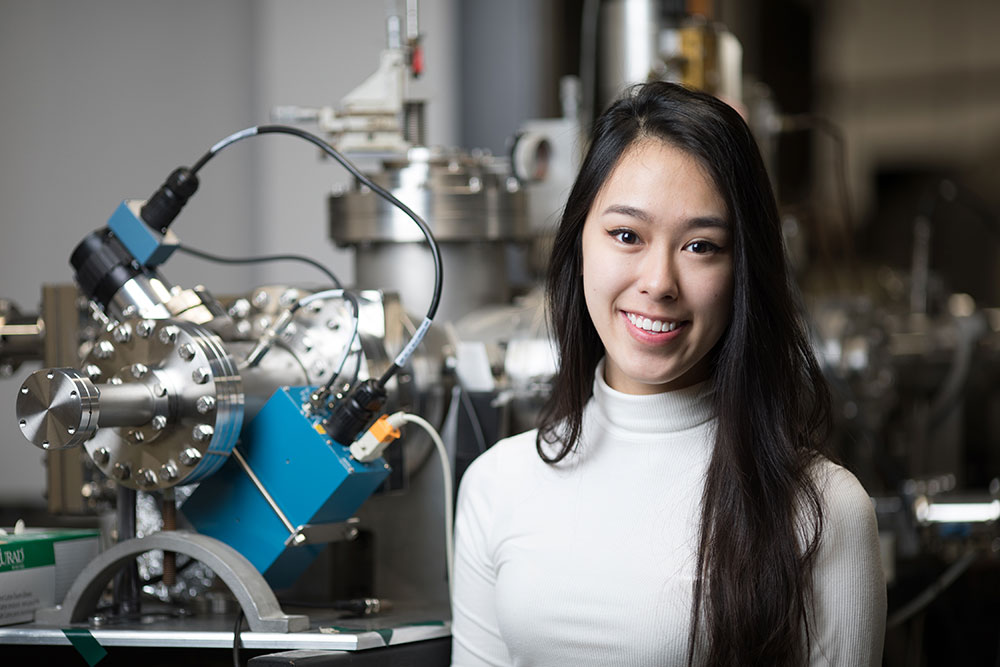 When she was 16, Monica Pham mapped out her future. “My chemistry teacher was talking about how atoms could generate unlimited power,” recalls Pham. “I asked her what kind of person worked in this field, and when she said a nuclear engineer, I decided that’s what I wanted to be.”

Today, as a college sophomore pursuing nuclear science and engineering (NSE), Pham could not be happier with her decision. “That weird, defining moment in high school has worked out well for me, because with my interests in energy and engineering, NSE is a really great fit.”

In addition to her full plate of NSE classes such as 22.01 “Introduction to Nuclear Engineering and Ionizing Radiation,” and 22.06 “Engineering of Nuclear Systems,” Pham is engaged in research at the Collaboration for Science and Technology with Accelerators and Radiation (CSTAR), a joint laboratory of NSE and the Plasma Science and Fusion Center (PSFC).

“I remembered touring the CSTAR facility during freshman pre-orientation, and thought this would be a great way to get my first real experience in nuclear engineering,” Pham says.

Pham’s project, one of a number at CSTAR, is under the supervision of assistant professor Zachary Hartwig, and involves the development of a system for diagnosing materials used in tokamaks—nuclear fusion reactors. Fusion energy harnesses the power of super-hot plasma, the fuel of stars, to generate enormous amounts of energy. Tokamaks confine and control plasma through the use of magnetic fields.

Before fusion energy can become a viable source of energy, critical issues must be addressed. Hartwig’s research, part of a five-year study devised by NSE Professor Dennis Whyte, focuses on some central questions: What are the potentially destructive impacts of plasma on tokamak components, and can these effects be assessed inside the fiery furnace of a typically inaccessible tokamak chamber?

This is where Pham comes in. She is part of a team using a particle accelerator to blast a beam of atomic particles at materials used in tokamak components. This research is an initial step in developing a full-scale diagnostic technique to measure the impacts of harsh conditions on plasma-facing components in a major fusion facility.

“Because plasma is kind of crazy, there is a lot of erosion and deposition to these materials in a tokamak,” she says “Previous diagnostic techniques are all ex situ—you have to take components out of the chamber afterwards to see how plasma affected them—so this technique is novel and could really help with new fusion reactor designs.”

“I’m learning a lot about how to set up and run experiments from them,” she says. “It’s both challenging and fun, especially when we have to troubleshoot an experiment that isn’t working as planned.”

After four straight terms on this project, Pham looks forward to the potential publication of research in which she has been involved. “One of the graduate students hopes to publish, including data I collected last year,” she says. “It would be kind of cool to be an undergraduate and a co-author.”

When not in class or in the laboratory, Pham makes time for the MIT chapter of the Society of Women Engineers. As festival chair, she sets up workshops and activities to engage girls and young women in science and engineering.

Pham recalls times during secondary school when she “was not taken as seriously as boys who wanted to go into engineering,” she says. “People would say to me, ‘Are you sure you want to do that; it seems pretty hard.’” As a result of these experiences, she says, “I want to empower girls to feel they belong in these fields.”

At such venues as the Cambridge Science Festival, and the USA Science and Engineering Festival in Washington, D.C., Pham runs open houses intended to introduce girls both to fun science, like using lemon juice to polish a penny, and to female science and engineering role models such as herself. “Some kids ask what it’s like to be a woman engineer or an MIT student, and I tell them it’s really cool,” she says.

She has proof this outreach makes a difference. “One time I was helping an eight-year-old girl build a mini-catapult, and she turned to me and said, ‘I was going to ask for a robot for Christmas and now I want to build a robot myself,’” says Pham. “It was an amazing moment, and showed me my efforts could really pay off.”