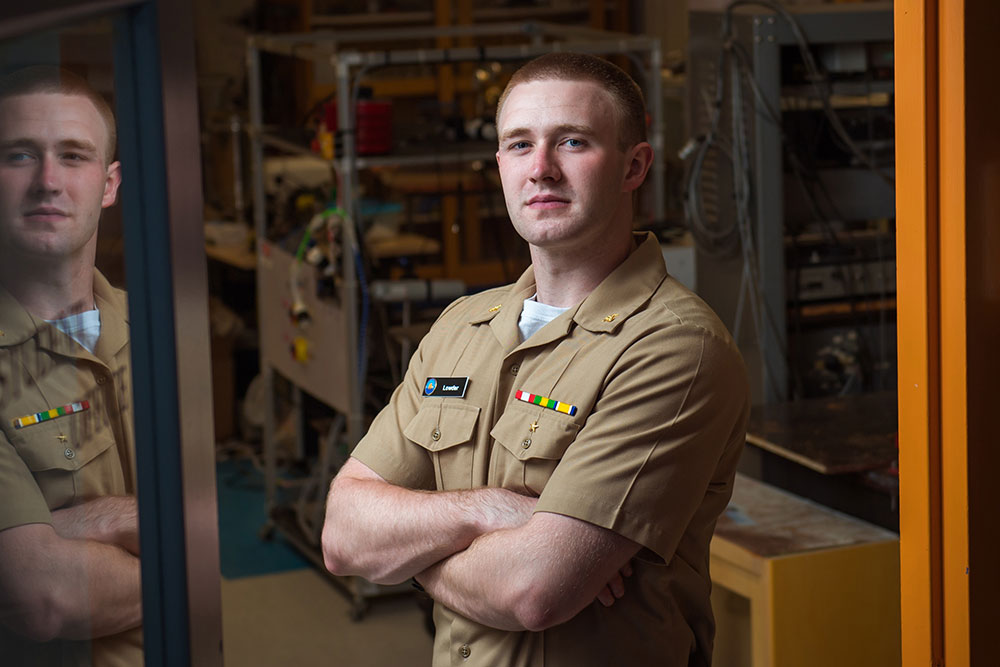 Midway through his senior year, MIT Nuclear Science and Engineering senior Sean Lowder, SB ’17, traveled to Washington, D.C., to interview for a job. He had three technical interviews scheduled, plus a meeting with the Admiral in charge of nuclear engineering for the U.S. Navy. They’d told him that his entire transcript was fair game for questioning, so Lowder hit the books.

“I had to review everything I’d studied,” says Lowder. “When I looked back on classes that I thought I hadn’t enjoyed, it turned out I’d actually learned a lot and it was interesting stuff.”

Among those classes was one about nuclear reactor physics and the study of how neutrons interact with materials in a reactor and change the reactor’s energy output. “It was one of the most challenging courses, but also one of the most interesting,” says Lowder, who got the job he was gunning for.

After graduation he’ll relocate to DC and join the engineering team responsible for overseeing the designs of nuclear reactors used to power the US Navy’s fleet of submarines and aircraft carriers. “Being part of the team that is responsible for the safety of all those subs and ships is such a cool responsibility to have,” he says.

Just a few years ago, before Lowder came to MIT, he didn’t know much about engineering. But an influential teacher at his high school, Tabor Academy in Marion, MA, got him interested in science and technology. That same teacher encouraged him to apply to MIT and to also consider the military academies. “I was pretty lucky growing up to have some really good opportunities, and thought joining the service was a great way of giving back,” says Lowder, who ended up combining the two by accepting a Navy Reserve Officers’ Training Corps (ROTC) scholarship to MIT.

He chose NSE as a major in part because he thought the field would be important in the coming years, particularly for the Navy, which uses nuclear power for propulsion and energy. But he also knew that nuclear engineering wasn’t taught everywhere. “I thought MIT would be a better place than anywhere else to study nuclear science,” he says.

In addition to his studies and ROTC, which involves early morning training and leadership meetings, he also did nuclear science research as part of the undergraduate research opportunities program (UROP). His first position, as a sophomore, was in the lab of Jacopo Buongiorno, associate head of NSE. The research involved understanding more about the properties of CRUD, corrosive particles that appear on fuel rods in a nuclear reactor. The team synthesized CRUD and studied how it carries heat to learn more about how it might affect the efficiency of the reactor. “Professor Buongiorno pushed us to do our best every single day,” says Lowder. “The research was fun and also painful at times.”

As a junior, he joined the lab of Michael Short, assistant professor of NSE, who is working on understanding how materials change when exposed to radiation. For instance, when neutrons bombard materials, they displace atoms. In metals, which are made of atoms arranged in a tight, orderly crystalline array, displaced atoms create holes. Over time, depending on the metal, those holes might get bigger, weakening the metal. But radiation also adds heat, which also rearranges the structure and can fill holes back in.

When Lowder joined the team, he had to learn on his own about the materials he was working on. “I didn’t know about damage pathways and the types of defects that can form,” he says.

Now, however, he is working on building simulations of material damage. The team’s short-term goal is to compare simulated damage to actual damage seen in controlled experiments as a way to move towards being able to predict the types of damage that could occur. Ultimately, the work could help engineers predict when components of a nuclear reactor might fail. “We don’t understand how radiation affects corrosion as well as we could,” says Lowder. “By doing this research, we hope we can predict problems at a reactor level.”

The other highlights of Lowder’s MIT career were the summer weeks he spent on Navy submarines. “Coming from a technical background, I took in every little thing and kept thinking about the engineering and design,” Lowder says.

Lowder is currently wrapping up his work in the Short lab so that he can write his thesis. ROTC has him up early, schoolwork keeps him up late, and club hockey helps him de-stress. He’s spread thin, but Lowder looks at all of his commitments as a source of strength. “I have a really good support network because of these groups,” he says. “They’re there for me and help me out when I need it. Everyone is teaching one another all the time.”