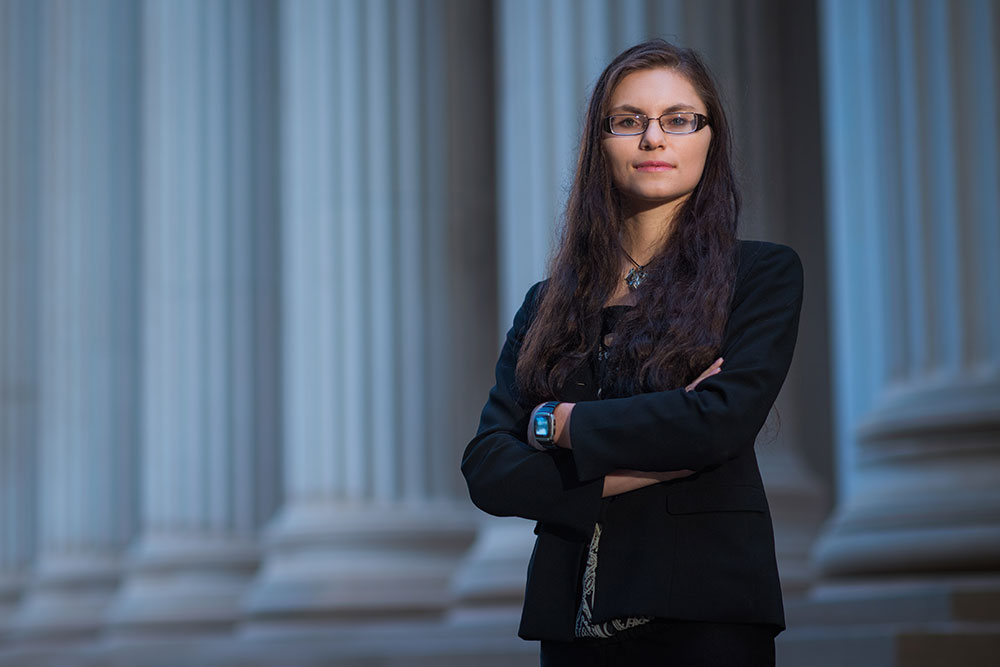 Eva Lisowski doesn’t do things by halves. “I love pushing myself to a higher standard,” says the junior, who is pursuing nuclear science and engineering (NSE) on a four-year ARMY ROTC scholarship. Her drive applies not just to cadet training, but also to academics and MIT extracurricular activities. “I want to make choices, even difficult ones, that don't leave me wondering later why I hadn't taken a risk,” says Lisowski.

One example of how Lisowski embraces a challenge: majoring in nuclear science. Her interest in the field dates back to eighth grade, when fellow students in a science class expressed opposition to nuclear energy. “My classmates said that nuclear radiation from plants could hurt people and believed it was nothing but dangerous,” she recalls. “But I always questioned when people hated things, and I wanted to learn the truth about nuclear energy for myself.”

Armed with this determination, Lisowski arrived at MIT. But tackling the fundamentals of the field proved demanding. “I came to MIT without an intuitive understanding for what a reactor was — what fission and neutrons are,” she says. “Starting from nothing was really hard.”

Growing up in Troy, Michigan, the daughter of a Ford engineer, she had a facility for math, and an interest in the built world around her. “As a kid, you see cars, buildings and bridges, and even if you don't know how engines or other things work, you have more opportunity to get exposed to the mechanics,” Lisowski says. “But nuclear reactors are farther from the public eye, and more mysterious.”

Although it has sometimes posed a struggle, Lisowski has nearly completed her required NSE coursework. She has also begun undergraduate research work, first with the Nuclear Reactor Laboratory (NRL), and most recently at the Plasma Science and Fusion Center.

“At the NRL, I learned how to calibrate and manually control a scanning electron microscope that we used to examine irradiated samples for microstructural flaws,” she says. “It was really cool because it turned out to be the same scope that my advisor, Professor Short, used as an undergraduate.”

The second research opportunity involves implanting deuterium into stainless steel using particle accelerator beams. While the work is just getting started, Lisowski is excited “to be practicing new skills rather than just doing P-sets,” she says. “And there's a possibility I could turn this research into an undergraduate thesis.”

Mission based to the core

Along with classes and research, Lisowski will maintain her strenuous ROTC regimen, which includes three early morning training sessions, as well as field training exercises. She is especially excited about the ROTC's leadership opportunities, which often involve talking in front of people and planning things on short notice. “I really like being put on the spot,” she says.

Among her favorite exercises: the 18-minute drill. It’s a combat scenario conducted out in the field, where Lisowski and a partner must map out, instruct and execute an ambush or reconnaissance plan in 18 minutes.

“We have to figure out who’s doing what and convey it to our cadre, right then and there,” she says. “The ROTC teaches you how to make decisions quickly, get something done, and helps you learn how to function effectively in stressful environments.”

Lisowski, who engaged in Civil Air Patrol search and rescue work during high school, wholeheartedly commits to her cadet training. “In the military, instructors yell at you and make things physically hard because they want to push you toward excellence,” she says. “I love performing these exercises, which teach military values of respect, loyalty and purpose.”

While Lisowski says it is too early to nail down her post-MIT career plans, she believes she will be ready to serve as an officer in the U.S. Army. But because she also finds the idea of intelligence work exciting, she plans to take policy courses “focusing on the security aspects of nuclear,” she says.

Lisowski feels the biggest challenge for her final years at MIT will be “balancing ROTC and school life.” She doesn't just mean academics. Because she recently joined a cooking co-op, Lisowski must figure out how to prepare favorite meals like fettucine Alfredo with mushrooms and broccoli for eight—after spending a day in field training.

And Lisowski has another extracurricular commitment testing her time-management skills, one that seems especially fitting for someone eager to live life at its fullest. She is president of the MIT Spinning Arts Club. No, it has nothing to do with bicycles, fabrics, or ceramics.

“Imagine a light saber with two ends on fire that you perform with,” she explains. Combining a martial art with juggling, dance and craft design, it’s an activity that Lisowski runs, with weekly meetings and shows in the Stata amphitheater. Her unique take on spinning involves a kind of ballet-spinning arts fusion, with a flaming staff. She also enjoys partner performances, and sometimes even fire-eating. It looks kind of risky, but Lisowski wouldn't have it any other way: She says, “I believe in living with no regrets: Once I make a decision to do something, I do not look back.”

VIDEO: Eva Lisowski speaks about what drew her to nuclear science and engineering