Guanyu Su: Turning up the heat 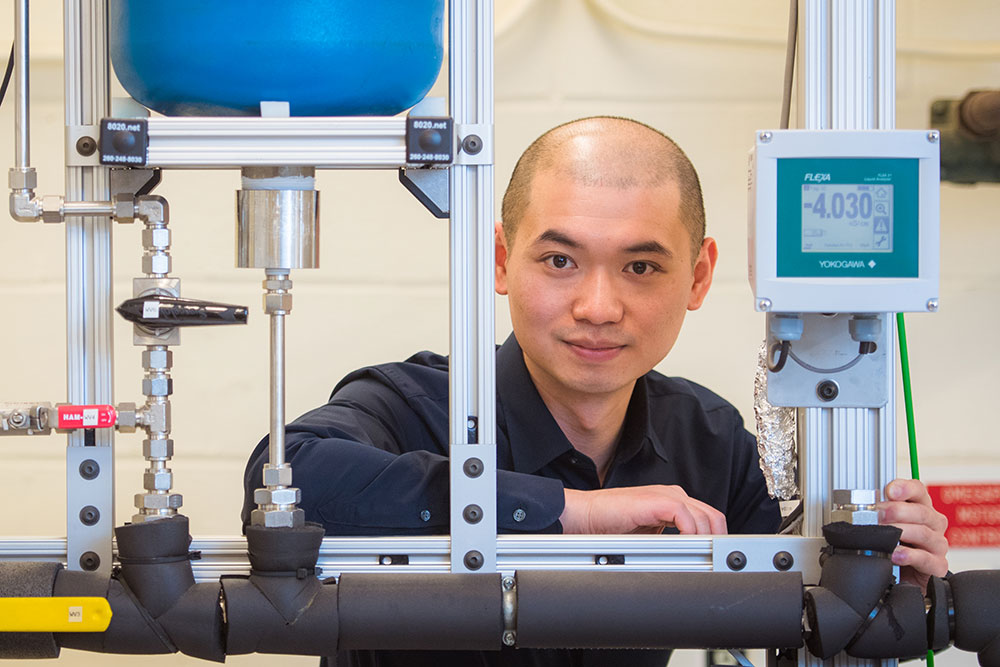 It was Guanyu Su’s childhood dream to find ways to cool a warming world. A sixth-year PhD student in nuclear science and engineering (NSE), Su grew up in Nanning, a sweltering city in southern China. “Coming from a hot and humid place, I always thought if I could just lower the temperature a bit, it would be better for all of us,” he says.

Today, he is realizing this goal through novel research on heat transfer in nuclear reactors. His experimental techniques for capturing the complex phenomena of fluids in boiling water reactors may enable next generation nuclear reactors to turn up the heat while safely producing more megawatts of carbon-free electricity.

Su’s interest in clean energy generation was sparked by his grandfather, a supervisor for a large hydropower project. “He was working day and night while the dam was being built, but I made him tell me many stories and explain how everything functioned,” Su recalls. “I was so interested that I just decided to keep researching the area as a student.”

At Chongqing University, Su earned a degree in power engineering. “I studied boiler design, fluid dynamics and heat transfer,” he says. “Because our main focus was on building and operating coal plants, I also learned the cost of producing energy with fossil fuels: CO2 and SO2 emissions, with a lot of pollution and a big impact on climate.”

For Su, this realization triggered a change of course. For his master’s degree, he decided to switch to nuclear engineering. He took direct aim at one of the field’s most challenging problems: enhancing reactor efficiency. “The idea is to output more and more power for the same size of reactor, but if you increase power too much, you raise the risk of damaging the reactor’s components,” says Su.  “To increase efficiency and maintain safety, we need new ideas and techniques.”

Eager to advance this cause, Su sought a research berth where he could investigate the fundamental mechanisms underlying heat transfer and fluid dynamics in nuclear reactors. But he discovered few opportunities in Chinese graduate programs.

Because the Chinese nuclear energy program was intent on bringing many plants online quickly, “a lot of the research was restricted to the engineering level, to ensuring that nuclear plant components worked as designed, or worked together in the right way,” Su says. “Engineers wanted to fix problems and get things up and running quickly; they didn’t have time to go deeper.”

So he trained his sights overseas, and after much online exploration, specifically on MIT. “Research in the nuclear science department involved many new ideas that inspired me,” he says.

In 2012, Su arrived in Cambridge and with the help of his advisor, Jacopo Buongiorno, TEPCO Professor of Nuclear Science and Engineering, identified topics for his graduate research: how to characterize heat transfer processes inside reactors with greater precision, and how these processes vary under different extreme conditions. Not coincidentally, these are two areas of critical interest to the nuclear engineering field.

Inside a boiling water nuclear reactor under normal operating conditions, steam produced by the steady churn of boiling water drives the water into small channels along the side of the fuel rods, where it forms a thin film. “That’s what we want,” says Su. “Because the film is thin and heat transfer through it is efficient, no boiling happens directly on the wall of the fuel rod.”

But if there is a change in the flow rate of the water, or the output power of the fuel rod increases (phenomena called transients), problems may emerge. “You may get boiling and formation of bubbles inside the liquid film, on the fuel rod,” says Su. “If the disturbance is too large, it might break the liquid film and then the fuel rod surface becomes dry, with some surfaces growing very hot and burning out.”

The issue of transients is central to optimization and safety in nuclear reactor operation, and there have been no definitive answers to what fluid flow and heat flux (defined as output power over area) conditions provoke boiling in thin films.

So Su set out to try to answer these questions, applying novel imaging techniques and mathematical modeling. In one set of studies, he helped build and modify a liquid film sensor for reading tiny voltages that correlated to the thickness of the liquid film coating the walls of fuel rods. Another group of experiments involved using infrared thermography to record radiation levels on a multitude of points on a prototypical reactor surface, which Su then converted into a detailed temperature map.

Su’s experiments yielded a wealth of findings. First, he confirmed longstanding theoretical projections that the initiation of boiling in liquid thin films happens at much higher heat flux and water temperatures compared to normal boiling conditions. Then Su was able to convert his results into a first-ever mathematical model for predicting thermal conditions that can trigger initiation of boiling in thin films.

“This code will prove very useful in designing future reactors, because it enables us to determine precisely when conditions lead to boiling in thin films,” he says. “We will be able to optimize reactors while verifying their safety margins.”

This research has earned Su recognition in the field: He won the 2016 Young Professional Thermal Hydraulics Research Competition of the American Nuclear Society. He is also first co-author of several journal articles in the past year and will soon publish his prediction model for boiling in thin films.

In the coming months, Su will complete his dissertation and prepare for post-doctoral research with assistant professor Matteo Bucci investigating whether nano-engineered surfaces inside reactors can boost heat transfer. Beyond that lies the prospect of a faculty appointment.

When not consumed by writing and lab work, Su hopes to head for the hiking trails of the White Mountains with his wife, who works in human resources at MIT. “I go up to where the air is clear and cool,” he says. “I like to get a bird’s eye view of everything.”