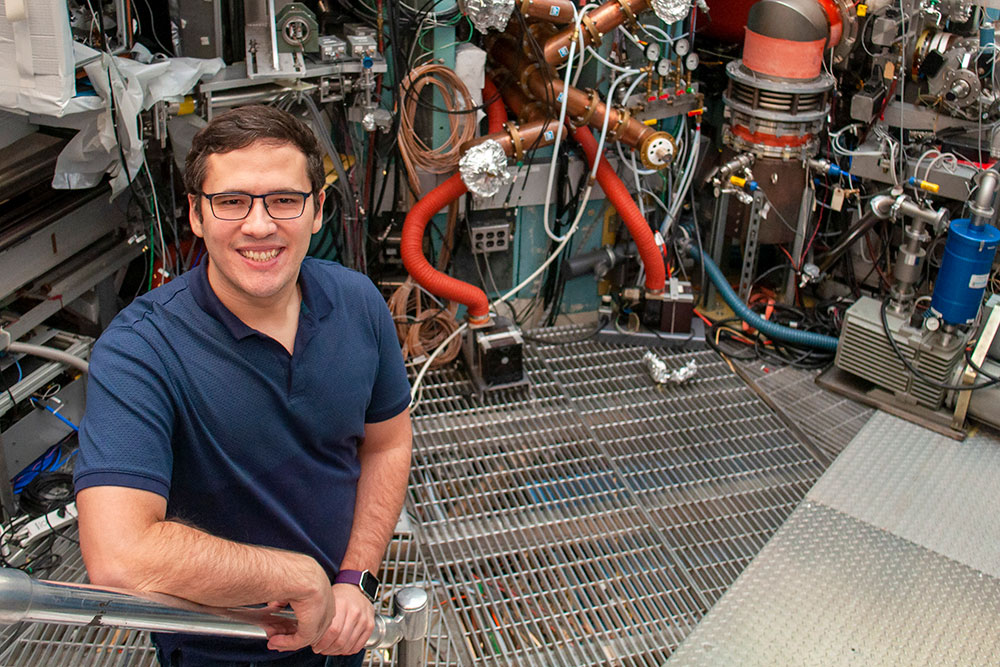 The field of magnetic fusion research has mysteries to spare. How to confine turbulent plasma fuel in a donut-shaped vacuum chamber, making it hot and dense enough for fusion to take place, has generated questions — and answers — for decades.

As a graduate student under the direction of Nuclear Science and Engineering (NSE) professor Anne White, Pablo Rodriguez-Fernandez (PhD’19) became intrigued by a fusion research mystery that had remained unsolved for 20 years. His novel observations and subsequent modeling helped provide the answer, earning him the Del Favero Prize, awarded annually to a PhD NSE graduate whose thesis is judged to have made the most innovative advance in the field.

“When you cool the edge of the plasma by injecting impurities, what every standard theory and intuition would tell you is that a cold pulse propagates in, so that eventually the core temperature will drop as well. But what we observed is that in certain conditions when we drop the temperature of the edge the core got hotter. It’s sort of heating by cooling.”

The counterintuitive observation was not supported by any existing theory for plasma behavior.

“The fact that our theory cannot explain something that happens so often in experiments makes us question those models,” Rodriquez-Fernandez says. “Should we trust them to predict what will happen in future fusion devices?”

These models were the basis for predicting performance in the PSFC’s Alcator C-Mod tokamak, no longer in operation. They are currently used for ITER, the next-generation machine being constructed in France, and SPARC, the tokamak the PSFC is pursuing with Commonwealth Fusion Systems (CFS).

To solve the mystery Rodriguez-Fernandez learned complex coding that would allow him to run simulations of the edge-cooling experiments. When he manually cooled the edge in his early simulations, however, his models failed to reproduce the core heating observed in the actual experiments.

Carefully studying data from Alcator C-Mod experiments, Rodriguez-Fernandez realized that the impurities injected to cool the plasma perturb not only the temperature, but every parameter, including the density.

“We are perturbing the density because we are introducing more particles into the plasma. I was looking at the Alcator C-Mod data and I was seeing all the time these bumps in density. People have been disregarding them forever.”

With new density perturbations to introduce into his simulation, he was able to simulate the core heating that had been observed in so many experiments around the world for more than two decades. These findings became the basis for an article in Physical Review Letters (PRL).

To strengthen his thesis, Rodriguez-Fernandez wanted to use the same model to predict the response to edge cooling in a very different tokamak - DIII-D in San Diego. At the time, this tokamak did not have the capability to run such an experiment, but the MIT team, led by research scientist Nathan Howard, installed a new laser ablation system for injecting impurities and cold pulses into the machine. The subsequent experiments run on DIII-D showed the predictions to be accurate.

“This was further support that my answer to the mystery and my predictive simulations were correct,” says Rodriguez-Fernandez. “The fact that we can reproduce core heating by edge cooling’ in a simulation, and for more than one tokamak, means that we can understand the physics behind the phenomenon. And what is more important, it gives us confidence that the models we have for C-Mod and SPARC are not wrong.”

Rodriquez-Fernandez notes the excellent collegial environment at the PSFC, as well as a strong external collaboration network. His collaborators include Gary Staebler at General Atomics, home to DIII-D, who authored the Trapped Gyro-Landau Fluid (TGLF) transport model used for his simulations; Princeton Plasma Physics Laboratory researchers Brian Grierson and Xingqiu Yuan, who are experts at a modeling tool called TRANSP that was invaluable to his work; and Clemente Angioni at the Max-Planck Institute for Plasma Physics (IPP) in Garching, Germany, whose experiments on the ASDEX Upgrade tokamak supported the findings from the PRL article.

Now a postdoctoral associate at the PSFC, Rodriguez-Fernandez devotes half of his time to SPARC and half to DIII-D and ASDEX Upgrade. With all these projects he is using the simulations from his PhD thesis to develop techniques for predicting and optimizing tokamak performance.

The postdoc admits that the timing of his thesis could not have been better, just as the SPARC project was ramping up. He quickly joined the team that is designing the device and working on the physics basis.

As part of the December 5 ceremony where Rodriguez Fernandez will receive the Del Favero Thesis Prize, he will discuss his how his thesis research is connected to his current work on predicting SPARC performance. Established in 2014 with a generous gift from alum James Del Favero (SM ’84), the prize is awarded annually to a PhD graduate in NSE whose thesis is judged to have made the most innovative advance in the field of Nuclear Science and Engineering.

“It’s very exciting,” he says. “The SPARC project really drives me. I see a future here for me, and for fusion.”

This research is supported by the U.S. Department of Energy, Office of Fusion Energy Sciences.