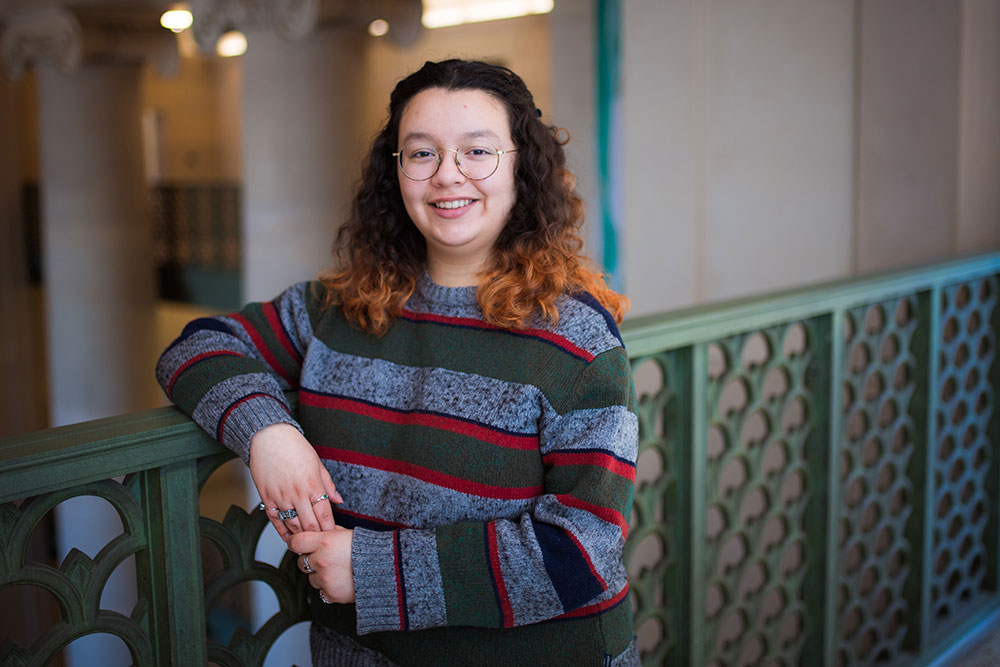 For Analyce Hernandez, there are few greater pleasures than venturing into the unknown. Take her experience during January’s Independent Activities Period (IAP), for instance. Hernandez, a double major in Course 8 and Course 22-ENG, signed up for “Build your own Fusor,” a class taught by research engineer William M. Burke, Jr. of the Plasma Science and Fusion Center.

“I had no idea what the outcome would be of trying to make my own mini-fusion reactor, but the project was hands on, and high voltage,” recalls Hernandez. “Nuclides were smashing into each other and producing plasma with different colors—it was a lot of fun and I loved it.”

Hernandez’s joyful pursuit of novel learning experiences has powered her personal and academic journey, and lent her resilience during some challenging times.

Last year, as a sophomore, Hernandez was among the first students to sign up for 22-ENG, a new nuclear science and engineering program that offers a more flexible path for students interested in the field.

“At a dorm event, an upperclassman described the versatility of Course 22, with its inclusion of subjects like medicine and material science, which I found very attractive,” says Hernandez, who had arrived at MIT determined to major in physics, but also interested in a supplementary area of study.

Then, after taking 22.01 (Introduction to Nuclear Engineering and Ionizing Radiation), taught by Michael Short, Class of ’42 Associate Professor of Nuclear Science and Engineering, Hernandez was hooked by the field. The emergence of the new 22-ENG flex degree, which allowed her to incorporate classes relevant to her core physics interest, particle physics, made a double major possible.

Between physics and her 22-ENG concentration in quantum science, Hernandez is investigating some very fundamental questions. “In quantum mechanics class, we try to understand how particles work together in bizarre ways, using probabilities to think about how the universe works,” she says. “The ambiguity of quantum mechanics can be confusing or frustrating, but looking at the world this way is also almost beautiful.”

Hernandez has just begun an undergraduate research opportunity that seems a perfect match for her keen curiosity about the workings of the universe. She will be assisting on an experiment called GAPS (for General AntiParticle Spectrometer), which will fly a balloon high over the Antarctic in 2021 to detect particles of dark matter. (GAPS is the product of an international consortium of universities and other research institutions; the MIT contingent is led by Kerstin Perez, Class of 1948 Career Development Assistant Professor of Physics.)

“Dark matter is a big mystery, a black blob of mass out in space that we know must be there but somehow remains concealed,” says Hernandez.  The main goal of the project is to identify and measure what may be indicators of dark matter—low-energy cosmic-ray antinuclei—such as antideuterons, antiprotons and antihelium. The GAPS balloon tracker, powered by solar panels during the Antarctic’s endless summer days, carries technology that can capture these particles. “In the experiment, the particle will strike the balloon, slow down, direct its energy into a detector and create an exotic atom before it decays away, releasing X-rays,” says Hernandez.

During spring semester and next summer, Hernandez will do the painstaking work of calibrating thousands of detectors that will be borne aloft by the balloon. “The technology requires individual testing, to ensure detectors achieve the kind of fine sensitivity and efficiency required,” she says.

While this UROP and her double major demand a significant portion of her waking hours, Hernandez remains committed to a job she assumed when she first arrived at MIT. As first a caller, and now a call center supervisor, she reaches out to MIT alumni to raise funds for the Institute. “I like talking to people and hearing their stories, and my passion for MIT reminds them about what they got out of being here, so I’m paying it forward so future students have the same opportunities,” she says.

Hernandez describes falling in love with MIT at her first visit during a Weekend Immersion in Science & Engineering, a program for students of color and of low socioeconomic means. Her Pittsburgh-based parents, both high school drop outs, encouraged her ambition to pursue science, and particularly physics, wherever it led. As a first-generation college student, though, things did not come easy for Hernandez.

“It was really hard to be away from my family, and faced with coursework that was very difficult for me, I tried to brute force my way through everything,” she says. Before MIT, she had been diagnosed with depression and anxiety, which made this first year even more trying. But by drawing on support from MIT’s health and counseling system, and learning to ask for help from academic mentors, she cleared a path forward.

Today, as a member of the Active Minds Club, Hernandez gets the word out to fellow students: “The mental health help I received made it possible for me to do all the things I do here, and thrive,” she says. “It’s important that those top-of-class high school kids who might feel overwhelmed and stressed out here know not to feel shame or guilt, and that there are resources here for them.”

For Hernandez, an important pressure valve is movie watching. She has taken two film courses at MIT, but really loves kicking back and screening horror films on Netflix. “I especially love Wes Craven’s Scream series, where they’re aware of clichés, and break the fourth wall so there’s a lot of parody,” she says.

With a life full of classwork, jobs, extracurriculars, and research projects, Hernandez contemplates a post-graduate future in academia, one that will give her regular opportunities for experimentation. “Assuming I continue to graduate school, I think I would like to be involved in a research effort, like the one I’m working on in dark matter, where I uncloak big mysteries and discover something fundamental about the way the universe works.”