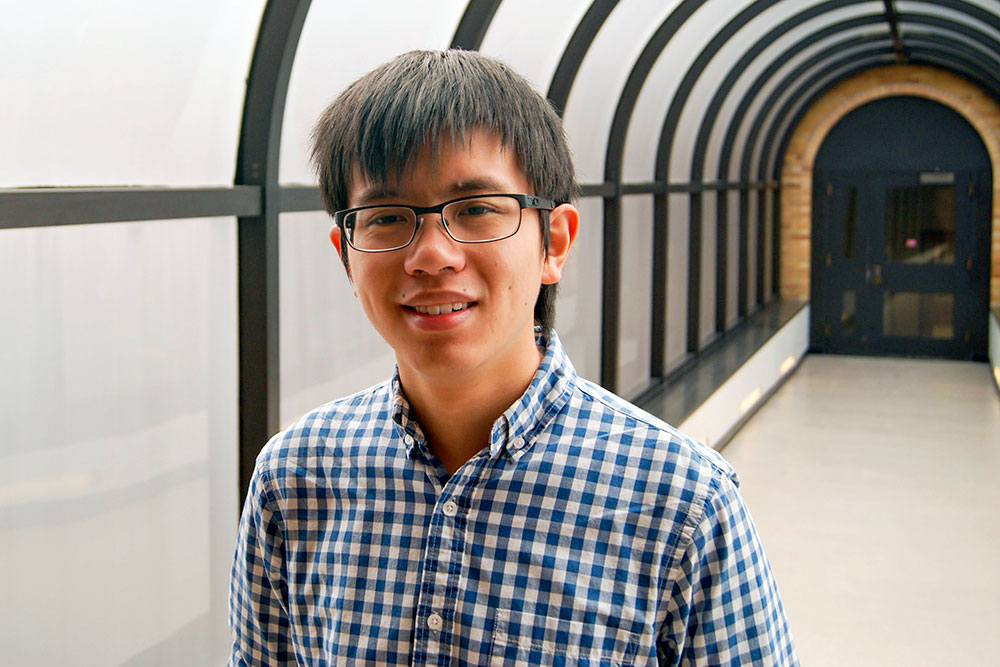 For the past four years NSE graduate student Norman Cao has been the Plasma Science and Fusion Center’s go-to “answer man,” replying to questions like these emailed by students and members of the general public interested in getting a deeper understanding of fusion and its potential as a future energy source.

Lately Cao has had questions of his own to answer, and scientific ‘lore’ to debunk, in a PhD thesis that seeks to correct a popularly held and intuitive belief about plasma turbulence. And as he prepares to graduate from MIT and start a postdoctoral instructorship at New York University’s Courant Institute of Mathematical Sciences he questions, in a world affected by COVID 19, exactly where will he be living, and how will he be performing his duties as teacher and researcher.

Cao arrived at MIT an undergraduate nine years ago. Originally majoring in aerospace engineering, he changed course as he neared the end of his senior year. Having interned at several industries he realized his passion was for research rather than for engineering or applied work.

“These aerospace industries had less of a focus on fundamental science,” he explains. “It didn’t interest me to figure out how to get a couple percent better performance on an airplane wing. But I’d always had a passing interest in fusion from reading science fiction, where it is always the energy source used in future worlds,” he continues. “How do you power these spaceships? It’s got to be fusion, of course.”

A senior-year course in plasma science taught by Nuclear Science and Engineering (NSE) Prof. Anne White helped stir that interest into something more profound. When he was accepted into the NSE graduate program at MIT, he was ready to focus on fusion at the PSFC.

There, with the guidance of senior research scientist John Rice, Cao was able to experiment on the Alcator C-Mod tokamak, the Center’s signature fusion device until it was shut down in September 2016. The data gathered on this device is the basis for his thesis on plasma turbulence.

Tokamaks like Alcator C-Mod use magnetic coils wrapped around a toroidal vacuum chamber to confine hot plasma, with the goal of making it hot and dense enough for fusion to occur. Turbulence in the plasma works against this, transporting intense heat from the center of the tokamak to the cooler edge, frustrating attempts to maintain fusion reactions. Cao wanted to assess whether or not certain assumptions about the behavior of plasma turbulence actually held up to experiment.

The misconception is an easy one to embrace. Since the plasma can be shown to be unstable it seems logical to link calculations of stability to the observed plasma transport. “In this case,” says Cao, “a common intuition arises that changes in the observed turbulent transport can be traced back to changes in the characteristics of the linear instabilities present in the plasma.”

To challenge this belief, Cao performed so-called “rotation reversal hysteresis” experiments. Hysteresis is the dependence of a system’s observable state on its history, such as a magnet ‘remembering’ the previous direction of the applied magnetic field during the process of magnetization, even when the applied magnetic field is removed or reversed. For his experiments, this hysteresis implied that there was a range of densities where the turbulent flows could make the plasma rotate, like a tire spinning around an axle, in either the same direction as the plasma current or the opposite direction. Taking advantage of the coexistence of different states of rotation at the same mean plasma density and temperatures, Cao was able to show a change in turbulence that occurred without a concurrent change in linear instability characteristics.

“Part of my research was testing this gut feeling people have and showing that ‘No, it’s only a gut feeling.’ It does not end up matching the reality of what the experiment shows. The second part was trying to fill in the blanks. Now that we know that this assumption is conclusively invalid, we’d like to replace it with something better. What sort of intuition should we replace that previous intuition with?”

Cao defended his thesis via Zoom, the first at the PSFC to do so. He credits the NSE department for walking him through the process, making it “surprisingly smooth.” Although he’s adjusted to Zoom, he found working remotely on his thesis presentation a challenge.

“It feels lonely working on your own and not seeing others. It’s one of those things you don’t realize you miss until you don’t have it. Not being able to pop in and say hi to my advisor. I think not having that same level of community support is something that made it difficult to personally go through the process.”

He looks forward to teaching at Courant, though uncertain how virtual his first semester will be. His experience with PSFC outreach, not only answering questions online but in person, giving tours and performing hands-on demonstrations, has fostered his versatility as a teacher.

“Long term, for the health of academia, for the health of science, for the health of human progress in general it’s important to get people involved in the frontiers of science. I personally have a lot of people to thank who supported me through their efforts – like high school teachers, my parents, others I’ve met who have really gone above and beyond in mentoring and tutoring and sparking interest in doing these things. I think it’s important to pay this effort forward and get other people excited, to help them realize it’s OK to be excited about math and science; it’s OK to be passionate about doing something that is difficult, but at the same time fun and rewarding.”

Cao's research is supported by the U.S. Department of Energy, Office of Fusion Energy Sciences.