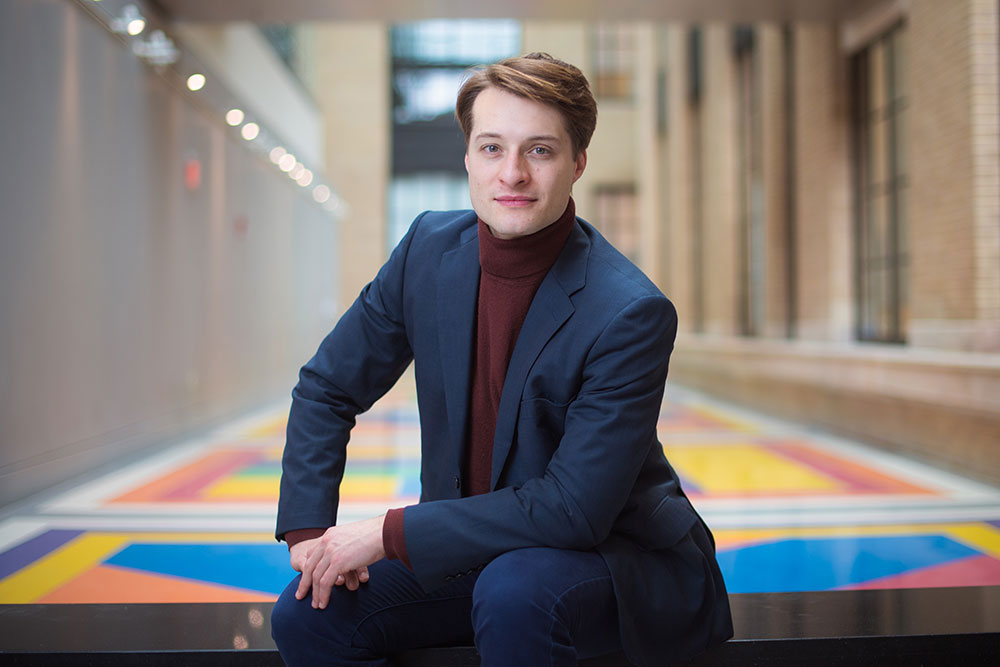 Like the atomic particles he studies, Pablo Ducru seems constantly on the move, vibrating with energy. But if he sometimes appears to be headed in an unexpected direction, Ducru, a doctoral candidate in nuclear science and computational engineering, knows exactly where he is going:

“My goal is to address climate change as an innovator and creator, whether by pushing the boundaries of science” through research, says Ducru, or pursuing a zero carbon future as an entrepreneur.

It can be hard catching up with Ducru. In January, he returned to Cambridge from Beijing, where he is spending a year earning a master’s degree in global affairs as a Schwarzman Scholar at Tsinghua University. He flew out just days before a travel crackdown in response to the corona virus

“This year has been intense, juggling my PhD work and the master’s overseas,” he says. “But I needed to do it, to get a 360º understanding of the problem of climate change, which isn’t just a technological problem, but also one involving economics, trade, policy, and finance.”

Schwarzman Scholars, an international cohort selected on the basis of academic excellence and leadership potential, among other criteria, focus on critical challenges of the 21st century. While all the students must learn the basics of international relations and China’s role in the world economy, they can tailor their studies according to their interests.

Ducru is incorporating nuclear science in his master’s program. “It is at the core of many of the world’s key problems, from climate change to arms controls, and it also impacts artificial intelligence by advancing high-performance computing,” he says

A Franco-Mexican raised in Paris, Ducru arrived at nuclear science by way of France’s rigorous and selective academic system. He excelled in math, history, and English during his high school years.  “I realized technology is what drives history,” he says. “I thought that if I wanted to make history, I needed to make technology.” He graduated from Ecole Polytechnique specializing in physics and applied mathematics, and with a major in energies of the 21st century.

Today, as a member of MIT’s Computational Reactor Physics Group (CRPG), Ducru is deploying his expertise in singular ways to help solve some of the toughest problems in nuclear science.

Nuclear engineers, hoping to optimize efficiency and safety in current and next generation reactors designs, are on a quest for high-fidelity nuclear simulations. At such fine-grain levels of modeling, the behavior of sub-atomic particles is sensitive to minute uncertainties in temperature change, or differences in reactor core geometry, for instance. To quantify such uncertainties, researchers currently need countless costly hours of supercomputer time to simulate the behaviors of billions of neurons under varying conditions, estimating and then averaging outcomes.

“But with some problems, more computing won’t make a difference,” notes Ducru. “We have to help computers do the work in smarter ways.”  To accomplish this task, Ducru has developed new formulations for characterizing basic nuclear physics that make it much easier for a computer to solve problems: “I dig into the fundamental properties of physics to give nuclear engineers new mathematical algorithms that outperform thousands of times over the old ways of computing.”

With his novel statistical methods and algorithms, developed with CRPG colleagues and during summer stints at Los Alamos and Oak Ridge National Laboratories, Ducru offers “new ways of looking at problems that allow us to infer trends from uncertain inputs, such as physics, geometries or temperatures,” he says.

These innovative tools accommodate other kinds of problems that involve computing average behaviors from billions of individual occurrences, such as bubbles forming in a turbulent flow of reactor coolant.  “My solutions are quite fundamental and problem agnostic—applicable to the design of new reactors, to nuclear imaging systems for tumor detection, or to the plutonium battery of a Mars rover,” he says. “They will be useful anywhere scientists need to lower costs of high fidelity nuclear simulations.

But Ducru won’t be among the scientists deploying these computational advances. “I think we’ve done a good job, and others will continue in this area of research,” he says. “After six years of delving deep into quantum physics and statistics, I felt my next step should be a startup.”

Scaling up with shrimp

As he pivots away from academia and nuclear science, Ducru remains constant to his mission of addressing the climate problem. The result is “Torana”, a company Ducru and a partner started in 2018 to develop the financial products and services aquaculture needs to sustainably feed the world.

“I thought we could develop a scalable zero-carbon food,” he says. “The world needs high-nutrition proteins to feed growing populations in a climate friendly way, especially in developing nations.”

Land-based protein sources such as livestock can take a heavy toll on the environment. But shrimp, on the other hand, are “very efficient machines, scavenging crud at the bottom of the ocean and converting it into high quality protein,” notes Ducru, who received the 2018 MIT Water Innovation Prize and the 2019 Rabobank-MIT Food & Agribusiness Prize, and support from MIT Sandbox to help develop his aquaculture startup (then called “Velaron”).

Torana is still in early stages, and Ducru hopes to apply his modeling expertise to build a global system of sustainable shrimp farming. His Schwarzman master thesis studies the role of aquaculture in our future global food system, with a focus on the shrimp supply chain.

In response to the coronavirus pandemic, Ducru relocated to the family farm in southern France which he helps run, while continuing to follow the Tsinghua Masters online and work on his MIT PhD. He is tweaking his business plans, and putting the final touches on his PhD research, including submitting several articles for publication. While it’s been challenging keeping all these balls in the air, he has supportive mentors — “Benoit Forget [director of the CRPG] has backed almost all my crazy ideas,” says Ducru. “People like him make MIT the best university on earth.”

Ducru is already mapping out his next decade or so: grow his startup, and perhaps create a green fund that could underwrite zero carbon projects, including nuclear ones. “I don’t have Facebook and don’t watch online series or TV, because I prefer being an actor, creating things through my work,” he says. “I’m a scientific entrepreneur, and will continue to innovate across different realms.”