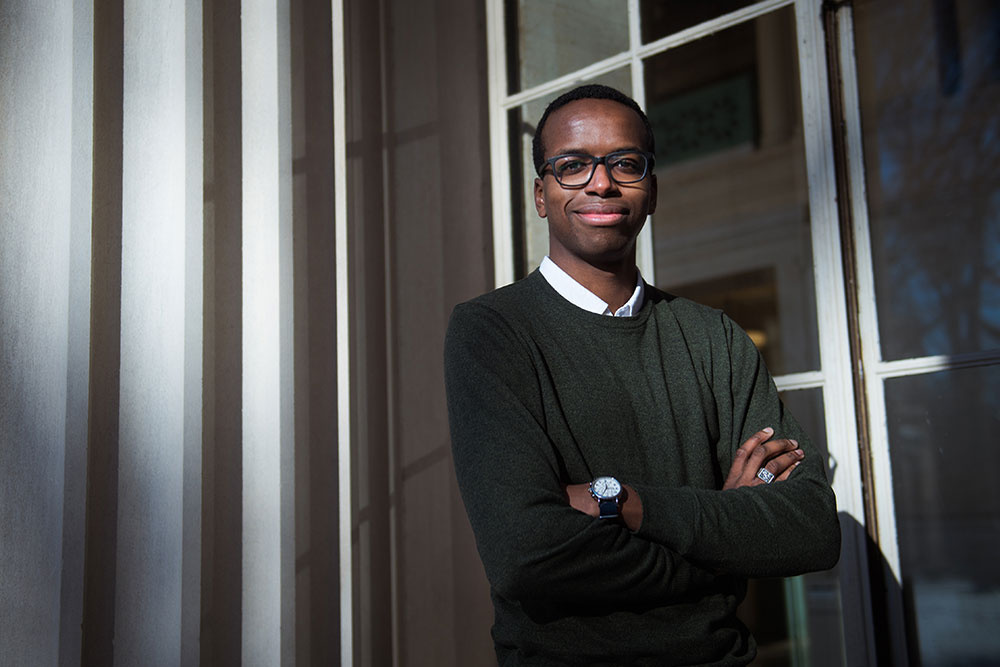 “I had always expected I’d stay at MIT for the four years, get my undergraduate degree at the end and probably return to the UK.”

Richard Ibekwe recalls his early assumptions about his academic path at MIT. Now he is a nuclear science and engineering (NSE) PhD candidate working at the Plasma Science and Fusion Center (PSFC), dedicated to long-term fusion research at MIT, focusing on magnet technology. Recipient of multiple undergraduate awards, Ibekwe has earned graduate-level support from the MIT Energy Initiative (MITEI), which has enlisted him as an MIT Energy Fellow, sponsored by Commonwealth Fusion Systems (CFS). He is also the current president of the MIT student chapter of the American Nuclear Society (ANS).

“Three things that have always fascinated me,” he says, “have been learning how things work, finding how to fix them, and using that knowledge to serve and care for those around me. Growing up, that manifested in building and tinkering with things—first toys and then DIY around the house. Now I see fusion fitting into that interest: there are few problems as hard to solve or that might have as profound a potential positive impact on our planet and the whole of humanity.”

Fusion, the reaction that fuels the sun and other stars, is a potentially endless source of carbon-free energy on earth, if it can only be harnessed. Much research has favored heating hydrogen fuel inside a donut-shaped device called a tokamak, creating plasma that is hot and dense enough for fusion to occur. Because plasma will follow magnetic field lines, these devices are wrapped with magnets to keep the hot fuel from damaging the chamber walls.

Ibekwe’s interest in fusion developed only in his senior year after taking an introductory design class from NSE professor Zachary Hartwig.

“As an undergrad, from a distance, fusion seemed a very esoteric, very physics-heavy endeavor. My background was much more engineering-focused. I was inspired by Zach’s teaching, and by the way he fused the science and engineering of fusion research.”

When Ibekwe applied to join Hartwig’s team as a PhD student he was not aware of the future that was taking shape at the PSFC. A tokamak called SPARC was being designed using a new high-temperature superconductor (HTS), a tape allowing larger electric currents and higher magnetic fields than traditional superconducting coils: it suggested a path to a smaller, less expensive fusion power plant that could be built more quickly than currently funded international projects.

“I just thought that fusion would be a cool subject to get involved with,” says Ibekwe. “It was a happy surprise to discover SPARC was in the works.”

Because so much of SPARC’s success depends on the new superconducting technology, it is not surprising that Ibekwe and his colleagues are researching it. Because high-temperature superconductors can handle greater magnetic fields than regular superconductors they are ideal for tokamaks.

“It turns out that almost everything about the fusion process gets much better and more favorable when you increase the magnetic field,” Ibekwe says. But he wonders what might negatively impact this process. How might flaws in the HTS tapes affect tokamak performance?

As they fabricate magnets with these thin HTS tapes, Ibekwe and his colleagues ask one key question: What is the critical current? What is the maximum current the tapes can carry before they cease to be superconducting, losing the features that make them central to a tokamak’s success, like their ability to conduct large electric currents with no electrical resistance?

“When producing these tapes — these thin, ribbon-shaped wires — the goal is to make them as high quality as possible so that the maximum current is high and uniform throughout the wire’s length. It turns out that when manufacturing these tapes, because perhaps gets dented, or a speck of dust falls on the tape when growing the crystal, it results in regions where the critical current is much lower. We call those dropouts.”

The critical current drops out at those locations, and the superconductor experiences electrical resistance. The area heats up, producing a situation where the heat expands, causing the entire cable to lose conductivity. To make the best of this situation, engineers can try to cut out any defects in the tape and use a shorter length, or they can produce a new length of tape to get what they want. But this corrective process can be expensive and time-consuming.

Ibekwe is embracing the imperfections, doing a deep dive into HTS tape flaws in an attempt to offer pragmatic solutions.

“First,” he says, “let’s measure and understand the effect of these defects on the performance of the superconducting tapes, which hasn’t really been done before in detail. Second, we need to figure out quantitatively how bad a defect we can withstand. Thirdly, how can we create magnets that contain defects in such a way that we can still make useable, efficient magnets?”

Ibekwe believes he may have inherited his pragmatic approach from his parents, who had moved from Nigeria to study in London before Richard was born. His mother completed her PhD in child nutrition while he was growing up.

“I think I got the academic influence from her,” he says. “My father is a building contractor. There’s the element of the practical aspect in me from him.”

Ibekwe’s preliminary research suggests the HTS tape magnets he’s been working on are intrinsically more tolerant to the presence of defects than low temperature superconductors.

“The challenge,” he says, “ is to come up with a design guide that will show engineers building these magnets what’s acceptable and what’s not.”

Ibekwe wants to continue working on the challenging problems in fusion and related fields, taking a holistic approach that is inspired in part by his leadership in ANS, which this year provided opportunities to address issues related to health, isolation, diversity, equity and inclusion. He foresees an academic career as a good way to achieve this goal.

“I want to wrestle not only with the scientific and engineering questions, but also with the societal and political, the philosophical and ethical questions,” he says. “I think the university is the best place to do that.”