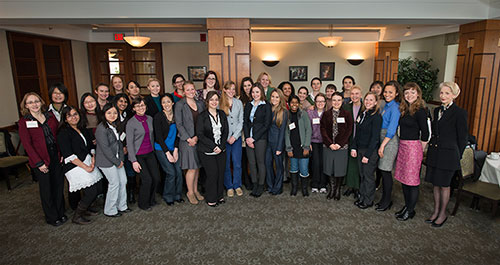 There was a profound sense of fellowship in the room March 5th when a dozen outstanding young women researchers gathered at MIT for the Rising Stars in Nuclear Science and Engineering Symposium. Of all the engineering disciplines, nuclear science and engineering might be the loneliest for women, with just 228 female graduate students and 13 postdoctoral fellows pursuing the field at the National Science Foundation’s last count. This forum, organized by the Department of Nuclear Science and Engineering, provided a singular opportunity for women on the verge of launching their careers in the discipline to share research and connect with each other and with established academics and practitioners.

“There’s a lot to be said for just seeing people who are similar to you,” said Kathryn Matlack, a Ph.D. candidate at Georgia Institute of Technology. “I have sometimes thought I don’t belong, but coming here, with all these women, you see there is a place to go.” Maria Gatu Johnson, an MIT Ph.D. in applied nuclear physics, said, “It’s a confidence booster to be part of something like this. It helps me reflect on where I want to go, what I’m doing, and how to get there.”

“We have to do better in attracting women to the discipline,” said Richard Lester, head of the Department of Nuclear Science and Engineering. He conceived the Rising Stars symposium, sponsored by the Department’s David J. Rose Fund, as part of a broader effort to sustain and grow the field at MIT and beyond. “Looking to the future, we see large needs for expansion of the workforce related to nuclear science and engineering. It will be easier meeting those needs if we increase the number of women entering and remaining in the field.” He hoped that the symposium might encourage participants to stick with their research and commit to nuclear science and engineering careers.

An NSE faculty trio — associate professors Paola Cappellaro and Bilge Yildiz, and assistant professor Anne White — planned the day around research presentations, distinguished speakers, and opportunities for discussing how to build a research career, especially in a discipline where women are severely underrepresented.

“Do you think the average person looking at me sees the chairman of the Nuclear Regulatory Commission?” asked Allison Macfarlane Ph.D. ‘92, Chair of the NRC, who kicked off the proceedings. “No, probably not.” Macfarlane noted the frustratingly slow rise in numbers of women in science and engineering, which has meant a continued struggle for recognition and respect. “You’re all sitting here because you’re probably pretty self-confident, but you have to know and keep inside of you that you’re good enough, as good as your peers,” she said.

Attrition in the nuclear engineering pipeline results in part from the difficulties ambitious researchers find in striking a balance between work and home, Macfarlane suggested.“What has to change are the cultural expectations especially here in the U.S. about how much you work and how productive you are,” said Macfarlane, for whom family is the priority.

Many symposium participants resonated with her description of the difficulties managing professional advancement with a healthy home life. “These are things I struggle with,” said Johnson. “I have a five- and seven-year-old, and I want to work as much as possible and have as much time with them as possible, and there are just not enough hours in the day.”

During the panel session, “How to Get a Faculty Position ... and Survive It,” Prof. Bilge Yildiz, a new mother juggling lab and faculty responsibilities, reported, “It’s not easy but it can work out.” Another panelist, Krystyn Van Vliet, Associate Professor of Materials Science and Engineering, counseled “Schedule in time for your own mental and physical wellbeing. It will be the first thing to let slip.” The session also provided details on grant writing, the tenure process, and leading research teams.

Symposium attendees, who also included current MIT graduate students in nuclear science and engineering, received more general career tips as well. At lunch, Lady Barbara Judge, Chairman Emeritus of the UK Atomic Energy Authority, told her audience that while the world had changed for women since she was a student in the 1970s, it was still true that “wherever you go, they’ll judge you based on what you look like.” Nevertheless, she said, “If you have ambition, let people know it.” 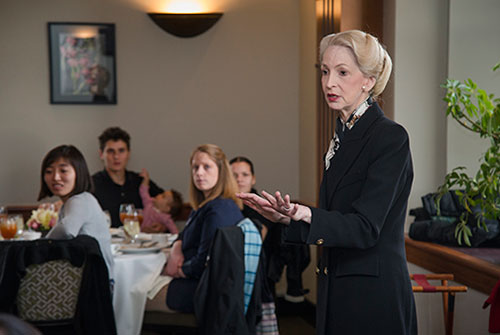 “It is so important to know you have people who can talk you through this,” reflected Jamie Porter at day’s end. This recently minted University of Tennessee Ph.D. in nuclear and radiological engineering is currently searching for an academic appointment, and before the symposium, had not found any women professors in her field. Anne White, who touched on the importance of mentors in her academic path, said she hoped ties made during the symposium would help these women achieve their goals, as they “see the support structure we can provide each other, and the career paths.”

For Kathryn Huff, of Argonne National Laboratory, it is already working out this way. “ It’s really nice to have a dozen people that I now can talk about these issues with, see what stages they’re in in their careers, see what they’re thinking about, encourage them to excel beyond what society expects. It’s important to have a community for that purpose, and I’m very excited to have these people to build a little community in the future.” 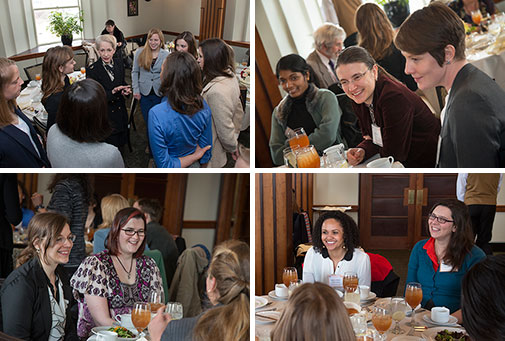 “Today was a new kind of experience — events like these provide good encouragement for young researchers like us.”
—Shima Damodaran

“There is a small minority of women in engineering — it’s great to know that there are other women out there who are doing the same things that we are.”
—Rebecca Romatoski

“I got a whole new view on nuclear engineering today. It was fantastic to hear Allison Macfarlane and Lady Judge today who gave very inspiring talks.”
—Kathryn Matlack

“Today represented how much progress we as women have made in NSE specifically and also in engineering in general. It’s amazing to be in this room with all these women who are doing awesome research. ”
—Mareena Robinson