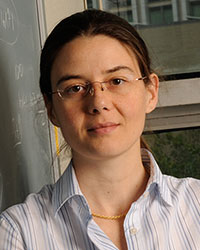 The development of new technologies at scales approaching the quantum regime is driving new theoretical and experimental research on control in quantum systems. The implementation of quantum control would have an enormous impact on a wide range of fields such as chemistry, nuclear magnetic resonance, microelectronics, and precision metrology. Quantum control finds an ideal application in quantum information processing (QIP), which promises to radically improve the acquisition, transmission, and processing of information. To reach this goal it is necessary to improve both the experimental techniques and the coherent control theory of quantum bits (qubits), as well as to gain a deeper knowledge of the mechanisms of decoherence, which must be studied and fought against. Below are some projects that my group is working on.

Control of quantum registers with NV centers in diamond

The Nitrogen-Vacancy (NV) center has recently emerged as a versatile tool for magnetic resonance,quantum optics, precision measurement and quantum information processing. The NV center is a localized impurity in diamond, consisting of a nitrogen substitutional atom close to a vacancy.Single NV centers are addressed using optical scanningconfocal microscopy and can be efficiently prepared, manipulated and measured with optical and microwave excitation, even at room temperature. The system comprising the NV electronic spin and close-by nuclear spins (N and 13C) is an excellent candidate for the implementation of small quantum registers capable of simple quantum algorithms with very high fidelities. These quantum registers can then in turn be connected via photon entanglement or direct dipole-dipole coupling. In this project, we will develop high-fidelity methods for controlling the electronic-nuclear spin system.

A system composed of nuclear or electronic spins could play an important role -complementary to cold atoms and molecules- in the simulation of condensed matter systems. For example, well-known NMR pulse sequences can be used to experimentally simulate the transport of quantum information in room temperature linear chains of spins coupled by the dipolar interaction. The next step is to demonstrate transport of information between quantum registers via quantum wires in a highly mixed state. We will use solid-state NMR to study simulations and information transport in large spin systems.