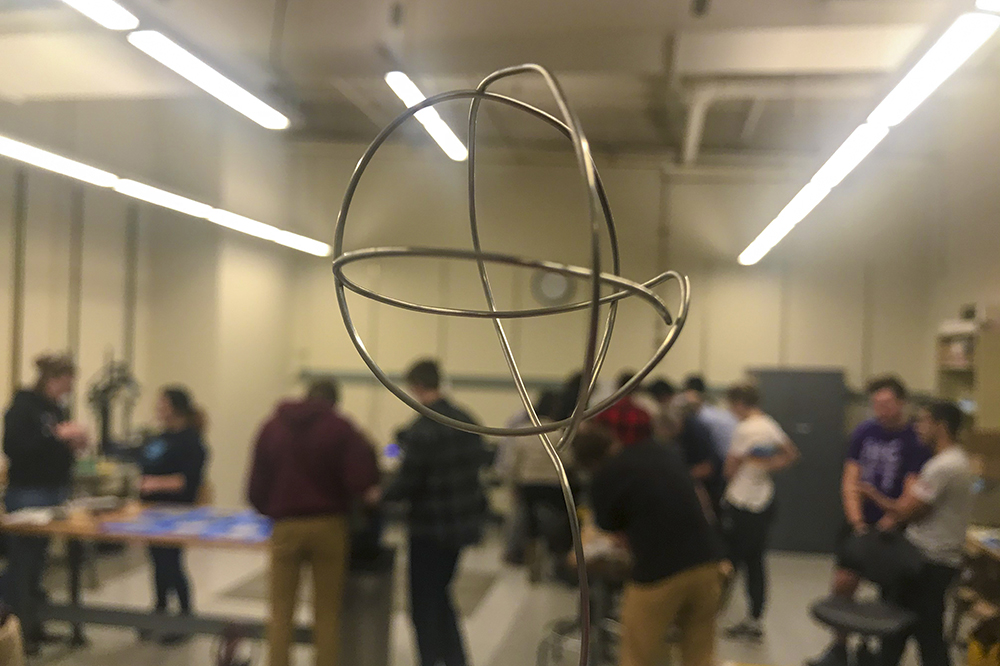 Willy Burke had never heard of a “fusor.” Until three years ago, the research engineer from MIT’s Plasma Science and Fusion Center (PSFC) was not familiar with the portable device that uses an electric field to accelerate ions to energies high enough to fuse. These had lately gained popularity as fusion equipment you could “build in your basement.” Then he met MIT undergraduate Alex Calburean (’19) and agreed to oversee his research project. With an enthusiastic and knowledgeable student at his side, Willie Burke learned how to build his first fusor, step by step.

Now, after IAP 2020, he has guided the successful creation of 14 fusors, in the process inaugurating a new maker space sponsored by the Department of Nuclear Science and Engineering, the PSFC and MIT’s office of Environmental Health and Safety.

This Nuclear Maker Space, dubbed “MIT Nucleus,” was proposed by nuclear science and engineering (NSE) professors Mike Short and Anne White as a way of using hands-on learning to nurture student curiosity about the fast-paced, international field of nuclear energy. Because nuclear engineering and plasma science experiments require high  voltages, high vacuum, high magnetic fields and the ability to deal with and measure ionizing radiation, they needed a dedicated and uniquely equipped maker space - one where, for example, fusors could be built.

One of the major issues for a fusor, or any fusion device, is how to keep the hot plasma fuel energized and confined in its container. The PSFC’s SPARC tokamak is being designed with magnets to keep the fusing plasma in place, a method known as magnetic confinement. The fusor instead confines the plasma with electric fields (inertial electrostatic confinement). Inside a vacuum chamber a small wire cage with a negative charge is positioned in the center of a larger, grounded cage. When voltage is applied ions are drawn to the center where they can collide and possibly fuse, creating a purple glow around the wire cage.

Alex Calburean reunited with Burke to design the simple IAP fusor, similar to one published by Make Magazine in 2013. Because the time to build that device was estimated at 20 hours, they broke the job into two parts: The PSFC machine shop would build the launch pad:  essentially a bottom flange with connections for the vacuum pump, a pressure gauge, and the gas feed system. The students would build the vacuum chamber, including the top flange with an electrical feed thru, and the fusor grid. Participants worked in teams of two to further economize on the time and space.

The six-hour course, which met for two hours a week, offered a Tuesday and Thursday session. It attracted undergraduates and graduate students from five departments, as well as staff, and even one alumnus, all teaming up and rotating from one work-station to the next. Noise levels increased as some participants fashioned the vacuum chamber, using rotary sanders to smooth rough-cut aluminum discs, while others hand-sanded polycarbonate tubes on a series of increasingly fine squares of sand-paper. At other times students were drilling a hole in the flange for the feed-through that would supply electricity to the grid.

During the final session of both courses, each team was able to produce a glowing plasma in their fusor. Most were also able to take data showing the effects of pressure on plasma voltage and observe the differences between air and deuterium plasmas. The experience provided a taste of the fundamental physics and engineering that supports PSFC fusion projects like SPARC.

Burke notes that some in the class had wanted to build fusors in high school but had run into administrative problems or objections. He says that the fusors built during the IAP course are safer because the vacuum is poor and the voltage is relatively low, a nonstarter for neutrons. “If you want to get it to fuse you have to get a better vacuum and a higher voltage, and before you get to fusion you are generating dangerous amounts of X-rays. That is why the radiation safety office is heavily involved in this space.”

With the first real test of the space successfully passed, Professors Short and White envision the space will open up opportunities for students in courses across the institute to propose innovative projects that require “NSE-specific” equipment.

“It was very exciting to see the nuclear makerspace coming to life during this IAP course,” commented Prof. Anne White, Head of the Nuclear Science and Engineering Department (NSE). “Our undergraduate program in Course 22 now includes a flexible degree, a NEET thread, a first-year MOOC, and many hands-on classes — the nuclear makerspace greatly adds to the unique educational experience that NSE can offer to MIT students.”

Participants in the course were enthusiastic about the experience. Freshman Kyle Thompson, double-majoring in NSE and Mechanical Engineering, had been looking for hands-on IAP activities when he came across the fusor opportunity.

“I think this was actually my favorite IAP class,” says Thompson, “because there were a lot of different things, from polishing the aluminum to sealing the vacuum. Just a lot of stuff I had never used before. And it was cool, they would say ‘Do you know how to use this,’ and I’d say ‘no’ and they would say, ‘OK, then we’ll show you.’ Instead of taking it out of your hands and doing it for you, they let you do it with them. We did it all in parts; and then operating it and seeing the glow… I was not expecting that whatsoever!”

Leanne Galanek, a junior majoring in NSE, was familiar with fusors having seen one constructed and tested by a group of students in her high school. But she had never built one herself.

“I especially enjoyed how we built our fusors using very regular materials and pretty simple techniques, and yet it made a really amazing thing. I think my biggest takeaway was that small maker projects like these are a really good way to learn more about things that interest you, and to bridge the gap between the theoretical and the physical.”

Burke agrees. “You probably can’t get it to fuse without doing a lot more work,” he admits, “but you get to see plasma and plasma effects. You get to play with the knobs and actually make real measurements - real science with just a simple device.”