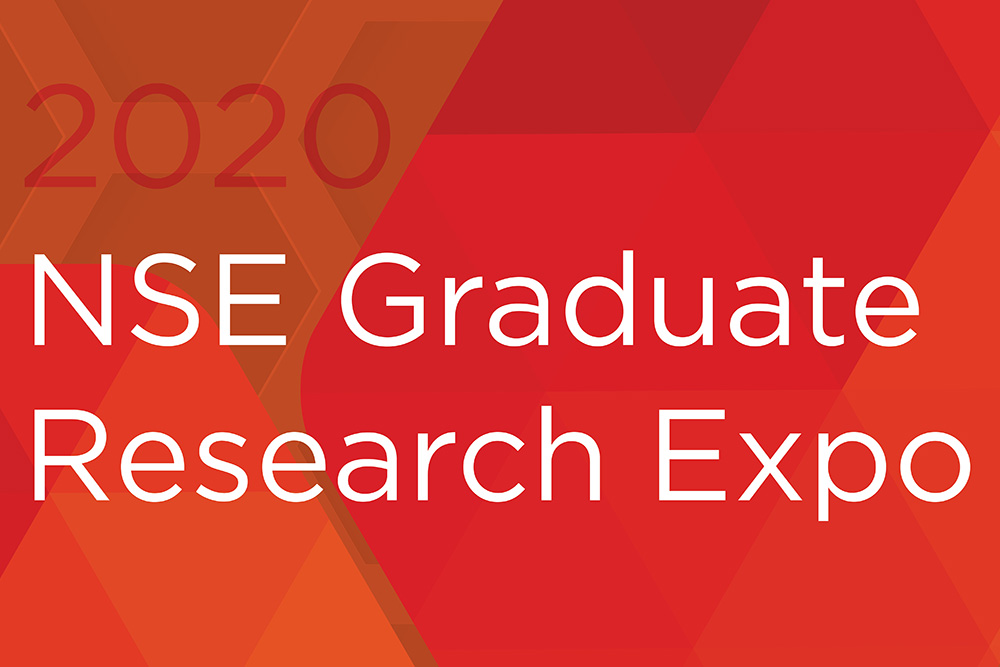 The MIT Department of Nuclear Science and Engineering hosted a virtual Graduate Student Expo this year. The annual event showcased posters on groundbreaking research by current NSE doctoral and masters. This year’s virtual Expo provided a unique opportunity for a wider audience to visit and learn about the diverse research being conducted within NSE by faculty and graduate students.

ABSTRACT: Boiling involves fast heat removal at relatively low temperature differences. Although this benefits such applications as the cooling of a nuclear reactor core, we don’t yet fully understand the inherent physical mechanisms involved. The complexity of boiling arises from a multitude of non-linear interacting sub-processes, including transient heat conduction, bubble dynamics, and thermal boundary layer dynamics. In this study, we combine high-resolution optical diagnostics to investigate how a single vapor bubble growth and departure removes heat from a surface. Infrared thermometry (IR) is used to measure the temperature and heat flux distributions over the boiling surface. The two-color laser-induced fluorescence (2cLIF) and particle image velocimetry (PIV) techniques enable the measurement of the temperature and velocity distribution in the liquid phase. The IR images reveal high heat removal rates by the liquid microlayer evaporation at the bubble footprint and the 2cLIF/PIV results portray the convection effects and flow structures caused by the bubble-induced liquid mixing. Our ultimate goal is to provide the physical basis for the development of engineered boiling surfaces.

Abstract: Robust verification of nuclear arms control treaties requires an ability to confirm the authenticity of nuclear warheads. However, standard techniques used for material identification and isotopic composition analysis, such as X-ray imaging and passive radiation detection, are not suitable for warhead analysis due to the high-Z content. In this work, we propose the design of a mobile warhead verification apparatus to analyze epithermal (1–10eV) neutron resonances of the high-Z elements (e.g. U, Pu, W) present in nuclear warheads. Monte Carlo simulations were performed to further optimize a previous design for an apparatus based on a commercially available, D-T portable neutron generator. Calculations of epithermal neutron transmission demonstrate that an authentic uranium warhead pit and tungsten tamper could be distinguished from a hoax object of low enriched uranium (< 20% 235U) with high certainty. The potential of neutron resonance spectroscopy for warhead verification is currently limited by the maximum attainable neutron flux of portable neutron generators, which has improved considerably in recent years. Development of a mobile warhead verification apparatus for use in nuclear treaty inspections would improve trust between nuclear weapons states and validate the importance of future nuclear arms control treaties.

Abstract: Quantum simulation promises to address many challenges in fields ranging from quantum chemistry to material science, and high-energy physics, and could be implemented in noisy intermediate-scale quantum devices. A challenge in building good digital quantum simulators is the fidelity of the engineered dynamics given a finite set of elementary operations. Here we present a framework for optimizing the order of operations based on a geometric picture, thus abstracting from the operation details and achieving computational efficiency. Based on this geometric framework, we provide two alternative second-order Trotter expansions, one with optimal fidelity at a short time scale, and the second robust at a long time scale. Thanks to the improved fidelity at different time scales, the two expansions we introduce can form the basis for experimental-constrained digital quantum simulation.

Abstract: Satellites operate in an intense radiation environment which can cause electronic components to fail. Empirically, it is found that some semiconductors are more radiation tolerant than others. This work aims to understand the fundamental origin of these differences by developing a model for semiconductor radiation tolerance. Density Functional Theory is used to calculate the electron density distributions which are processed (within the framework of Quantum Theory of Atoms in Molecules) to generate predictive parameters (e.g. the gradient and Laplacian of the electron density at bond critical points). In order to inform the simulations, we use positron annihilation lifetime spectroscopy and Rutherford backscatter channeling, to reveal vacancy and interstitial concentrations, respectively. Coupling quantum mechanical predictive parameters and experimental data, a model will be developed to uncover the fundamental driver of semiconductor radiation tolerance. Given this understanding, more radiation-tolerant semiconductors can be developed to increase the reliability of electronic components in orbit.

Abstract: High temperature superconductors (HTS) have the ability to revolutionize the fusion energy industry by enabling fusion power plant designs, such as the ARC fusion power plant conceptual design at MIT, to be smaller, lower cost, and faster to build. Many advanced experimental fusion device designs utilize copper or low temperature superconductors (LTS) to generate magnetic fields to control and drive the plasma in a fusion device. In order to produce net fusion energy using LTS technology, fusion designs must be very large due to the magnetic field limitations set by the LTS. In contrast to LTS, HTS magnets can withstand significantly higher magnetic fields and can also operate at higher temperatures—resulting in smaller and lower cost fusion energy power plant designs. However, the HTS materials bring about new scientific risks and challenges such as degradation of superconducting performance due to higher stresses and strains, unwanted volumetric heating due to AC losses, and difficulties in detecting localized loss of superconductivity, also referred to as a quench event. Prototype HTS cables tests have been performed at operating conditions with strain, AC losses, and forced quench events to de-risk and determine the feasibility of the HTS cable design for the future fusion device design.