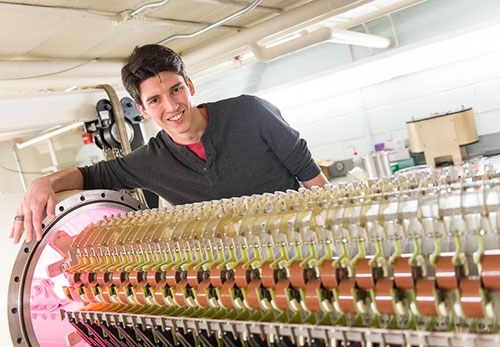 Like many in the MIT community, Jake Jurewicz has felt a lifelong attraction to engineering. “Growing up, all I ever played with were Legos and Lincoln Logs, things that involved building,” he recalls.

That love of making things found a challenging and rewarding engagement in the summer of 2012, when Jurewicz, an NSE-Physics double major fresh off his sophomore year, received a National Undergraduate Fellowship (NUF) to develop new simulation and visualization software at the National Fusion Facility (NFF) in La Jolla, Calif. He credits NSE Assistant Professor Anne White with encouraging him to apply for the fellowship, which took him to one of just two tokamak fusion reactors in the US other than MIT’s Alcator C-Mod.

After a weeklong orientation with about 40 other NUF fellows at Princeton University’s Plasma Physics Lab (home of the third US tokamak), Jurewicz joined a General Atomics team that is working to improve the performance of the NFF’s DIII-D tokamak as part of the broad international effort to realize the game-changing potential of fusion as a practical energy source. One basic challenge is generating extremely high temperatures, comparable to those in the core of a star. While Alcator does this with RF energy, DIII-D utilizes beams of deuterium, a hydrogen isotope.

“DIII-D has eight school-bus sized neutral beam injectors, that inject neutral deuterium particles into the tokamak,” explains Jurewicz. “When the particles hit the plasma, they ionize, and start being moved by the tokamak’s magnetic fields. As they collide with other particles they disperse their energy into the plasma, and ultimately heat it.”

However, up to 30 percent of the beam energy is wasted when newly ionized deuterium particles hit the reactor wall during their first orbit. This “prompt loss” creates inefficiency that undermines the reactor’s ability to put out more energy than it consumes, and can also create heat flux that damages reactor walls and instrumentation.

The General Atomics team, which included NSE alum Ray Fisher and former post-doc David Pace, had collected substantial data on prompt loss, including information about a heat flux that threatened an important polarimeter in the chamber wall. “I built a simulator, PLOWS, that lets you plug in the plasma and neutral beam parameters and see very quickly if the losses were localized or spread out,” says Jurewicz. “That helps determine whether changing parameters could move flux away from a given point, so that you can protect the equipment.”

Hurricane Sandy prevented Jurewicz from presenting his results at an American Physical Society meeting in Providence, but he notes that his General Atomics colleagues are still using PLOWS, both for study of prompt loss and visualization of massive data sets.

“So much data comes out of modern experiments like tokamaks that unless you’re really involved, it’s hard to look at it and grasp what’s going on,” he says. “I’ve been in that situation, trying to understand what someone’s presenting to me, so I included lots of 2D and 3D visualization capabilities to make things as clear as possible.”

While Jurewicz hopes to stay connected to fusion research, the Illinois native expects to spend his remaining undergraduate time learning more about fission while pursuing a minor in energy and a concentration in economics. This ability to create a custom-tailored curriculum was a major reason for his choosing Course 22. While an SM degree is likely in Jurewicz’s future, his long-term aspirations are more managerial than academic; he may follow the path of his architect father and several relatives who have started companies.

Also on his agenda: outreach for the MIT-hosted April 2013 American Nuclear Society Student Conference, with the theme, “Public Image of the Nuclear Engineer.” Jurewicz and NSE senior Cameron McCord are working with universities, publications, and corporations to publicize the event, which Jurewicz describes as “an opportunity to start rebuilding and re-shaping public opinion about the nuclear industry in the wake of Fukushima.”

Meanwhile, Jurewicz, who competes as a 400m runner on the Institute track team, continues to build things. He is applying his architectural skills to remodel a student lounge in NSE’s Building 24 and to help the MIT Theatre Arts Department prepare for a building project, and he has overseen several renovations at his Phi Sigma Kappa fraternity.

Jurewicz is a part of the broad international effort to realize the game-changing potential of fusion as a practical energy source.