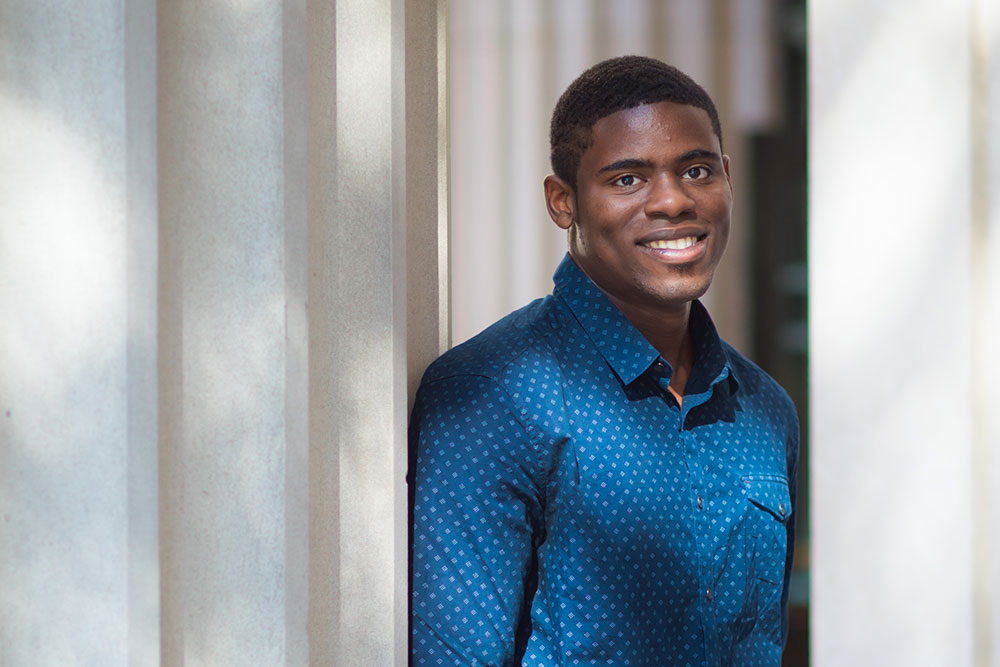 Although he has operated MIT’s research nuclear reactor and worked as an intern for a national energy laboratory, senior Olorunsola (Jerry) Akinsulire seems nowhere happier than with soldering iron in hand, demonstrating the use of machine tools to fellow students.

“It’s very exciting helping others develop their projects and being someone people can look up to,”  says Akinsulire, a double major in nuclear science and engineering (NSE) and physics.

As a leader in the development and soon, operation, of a new “maker space” for NSE, Akinsulire spends time doing what he most enjoys: collaborative, hands-on work in his field. This year he will serve as an official mentor to NSE undergraduates in a fabrication facility that he helped create.

“We really need this student space in nuclear engineering,” he says. “For most of the department’s project classes, when you have to manufacture something you must go somewhere else, and now we can do the work here.”

Akinsulire’s involvement in the NSE maker space venture space evolved from a series of his own maker opportunities. During freshman year Independent Activities Period, he built a Geiger counter in a course with Assistant Professor Michael Short. As a high school student Akinsulire had built robots for the FIRST Tech Challenge, but this was different. “It was exciting soldering and working with electric components for the first time,” he says.

Akinsulire’s next major maker opportunity arrived sophomore year in the Seminar in Fusion & Plasma Physics (22.012), taught by Anne White, Cecil and Ida Green Associate Professor in Nuclear Engineering. For a class presentation, Akinsulire and a partner described the structure and function of a fusor, the device that confines plasma in an electrostatic field.

“When we finished, Professor White told us that if we were interested, we could totally build one,” Akinsulire recalls. “We said, ‘Really?’ She said, ‘Really!’”

After researching components from vacuum chamber to pump to power supply, and figuring out how to design an electrode to trigger a fusion reaction, Akinsulire and a partner, with a graduate student mentor, assembled their own fusor. Watching argon gas turn purple as the voltage from the electrode in the confinement chamber increased, Akinsulire says “it was like magic.”

This side research project earned Akinsulire and his team a poster presentation slot at the 58th annual meeting of the American Physics Society Division of Plasma Physics in the fall of 2016.

Akinsulire spent the summer of 2016 devising safety guidelines, operating procedures, and layout for every machine shop tool that might come into play in a future NSE facility. He also developed simple projects for students new to making their own devices.

“Many students here focus exclusively on science and theory, but they need to translate ideas to prototypes, and use equipment to test and simulate,” he says. “It’s important for all students to become comfortable in the machine shop, to go from project design to something they can physically hold,” says Akinsulire.

Having made this journey himself, Akinsulire is eager to assist fellow students. He knows from his own experience how critical support can be, whether in a maker space or a classroom: During his pre-college instruction in MIT’s Minority Introduction to Engineering and Science (MITES) program, “the Physics II math was really challenging, and I thought I couldn’t do it,” recalls Akinsulire. “With my TA’s encouragement, I stuck with it, and ended up the top student in the class.”

This achievement reinforced Akinsulire’s belief that MIT was the right place for him, and nuclear engineering the right field. It helped validate a goal that had emerged during his AP Chemistry class at the Queens High School for the Sciences. “I vividly remember my teacher covering fission and fusion, talking about the impact of global warming, and how clean nuclear energy could help the environment,” he says. “I decided then that this was the path I wanted to go down.”

When Akinsulire arrived on campus, he was determined to investigate as many opportunities in nuclear science and engineering as he could fit in his schedule. In freshman year, he signed up for the student operator program with MIT’s Nuclear Reactor Laboratory. This led to a summer of instruction in reactor physics and training in basic reactor functions. More recently, Akinsulire interned at the Argonne National Lab. His research focused on using RFID tags and wireless sensor networks as part of a new safety system being developed for remote monitoring of radiation in nuclear reactors.

After graduating this spring, Akinsulire will continue with master’s studies at NSE. He hasn’t yet decided where his academic journey will ultimately lead, but he has some ideas, including designing a new reactor core and “contributing to the next big jump forward in the nuclear industry.” Akinsulire’s ideal job would involve “an interplay—developing ideas on a drawing board, building something hands on, and then testing in the world,” he says. “That would be the perfect combination for me.”