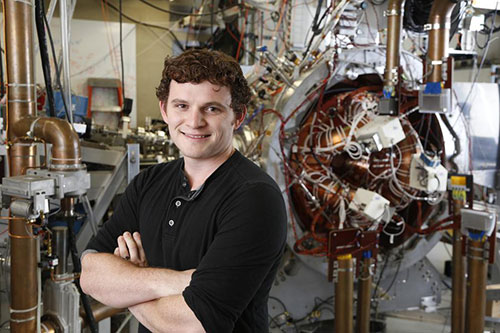 NSE alum Derek Sutherland has been named to the Forbes 30 under 30 list in the energy sector for 2015.

While he was at MIT, Sutherland double majored in Course 22 and 8 with a focus on plasma physics and fusion energy. In NSE Sutherland worked with Professor Dennis Whyte, the newly appointed director of the PSFC, on the ARC (Affordable, Replaceable, Compact) tokamak fusion reactor design. A co-authored paper on this work, “ARC: A compact, high-field, fusion nuclear science facility and demonstration power plant with demountable magnets,” is in press in Fusion Engineering and Design.

Sutherland also collaborated on projects at Los Alamos National Lab, General Fusion Inc., and General Atomics all on fusion concepts, both mainstream and alternative during the course of several summer internships while an undergraduate at MIT.

Sutherland is currently a PhD candidate at the University of Washington, where he is working on fusion reactor development based on the dynamo-driven spheromak configuration, which is called a “dynomak.” Sutherland and others published a paper on the dynomak concept in Fusion Engineering and Design in April 2014. He and his colleagues are in the process of forming a company and seeking investment for funding the next step in a fusion development path that will help to assess whether the dynomak concept is indeed a viable, cost-effective fusion pathway.

Sutherland is the fifth NSE alum or current student to have been selected for the Forbes 30 under 30 list in the energy field over the past three years. The others are: Robert Petrosky, Leslie Dewan, Mark Massie, and Jake DeWitte.