On course to create a fusion power plant 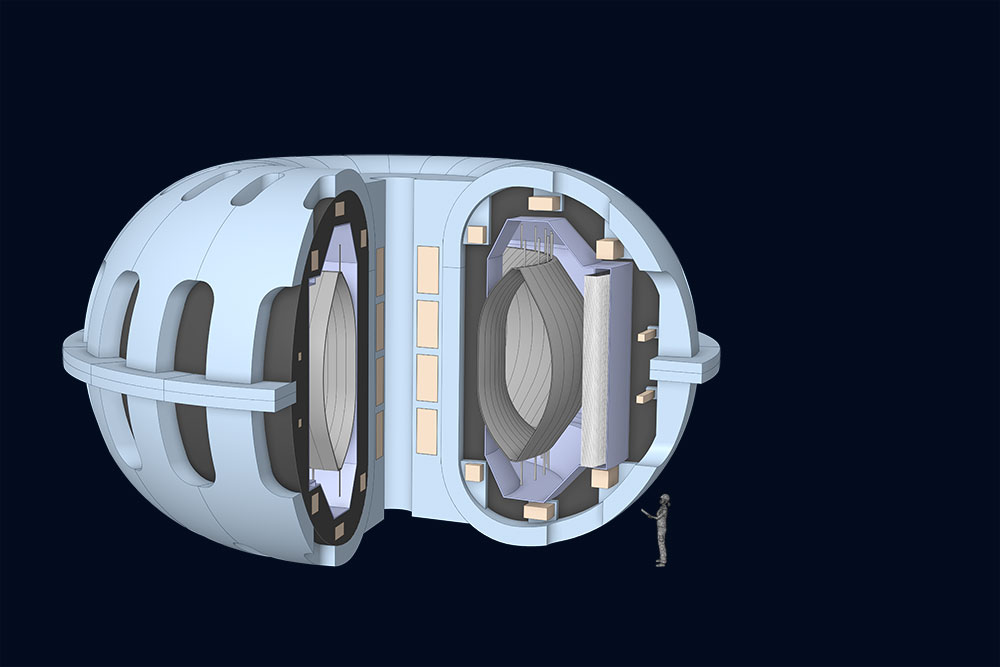 ARCH, a conceptual design for an onboard fusion device capable of generating ammonia fuel for ship engines

“There is no lone genius who solves all the problems.”

Dennis Whyte, Director of the Plasma Science and Fusion Center (PSFC), is reflecting on a guiding belief behind his nuclear science and engineering class 22.63 (Principles of Fusion Engineering). He has recently watched his students, working in teams, make their final presentations on how to use fusion technology to create carbon-free fuel for shipping vessels. Since taking on the course over a decade ago, Whyte has moved away from standard lectures, prodding the class to work collectively on finding solutions to “real world” issues. Over the past years the course, and its collaborative approach to design, has been instrumental in guiding the real future of fusion at the PSFC.

For decades researchers have explored fusion, the reaction that powers the sun, as a potential source of virtually endless, carbon-free energy on earth. MIT has studied the process with a series of “Alcator” tokamaks,  compact machines that use high magnetic fields to keep the hot plasma inside and away from the walls of a donut-shaped vacuum vessel long enough for fusion to occur. But understanding how plasma affects tokamak materials, and making the plasma dense and hot enough to sustain fusion reactions, has been elusive.

The second time he taught the course Whyte was ready for his students to attack problems related to net-energy tokamak operation, necessary to produce substantial and economical power. These problems could not be explored with the PSFC’s Alcator C-Mod tokamak, which maintained fusion in only brief pulses, but they could be studied by a class tasked with designing a fusion device that can operate around the clock.

Around this time Whyte learned of high-temperature superconducting (HTS) tape, a newly available class of superconducting material that supported creating higher magnetic fields for effectively confining the plasma. It had the potential to surpass the performance of the previous generation of superconductors, like niobium-tin, which was being used in ITER, the burning plasma fusion experiment being built in France. Could the class design a machine that would answer questions about steady-state operation, while taking advantage of this revolutionary product? Furthermore, what if components of the machine could be easily taken out and replaced or altered, making the tokamak flexible for different experiments?

What the class conceived was a tokamak called “Vulcan.” Whyte calls his students’ efforts “eye-opening,” original enough to produce five peer-reviewed articles for Fusion Engineering and Design.  Although the tokamak design was never directly built, its exploration of demountable magnetic coils, made from the new HTS tape, suggested a path for a fusion future.

Two years later Whyte started his students down that path.  He asked, “What would happen in a device where we try to make 500 megawatts of fusion power – identical to what ITER does – but we use this new HTS technology?”

With student teams working on separate aspects of the project and coordinating with other groups to create an integrated design, Whyte decided to make the class environment even more collaborative. He invited PSFC fusion experts to contribute. In this “collective community teaching” environment the students expanded on the research from the previous class, creating the basis for HTS magnets and demountable coils.

As before, the innovations explored resulted in a published paper. The lead author was then graduate student Brandon Sorbom. He introduced the fusion community to ARC, describe in the article’s title as “a compact, high-field, fusion nuclear science facility and demonstration power plant with demountable magnets.” Because ARC was too large a project to consider building immediately, Whyte and some of his postdocs and students eventually began thinking about how they could study the most important elements of the ARC design in a smaller device.

Their answer was SPARC, based on the experience gained from designing Vulcan and ARC.  This compact, high-field, net fusion energy experiment has become a collaboration between MIT and Commonwealth Fusion Systems (CFS), a Cambridge-based start-up seeded with talent from 22.63. Bob Mumgaard and Dan Brunner, who helped design Vulcan, are in CFS leadership, as is Brandon Sorbom. MIT NSE professor Zach Hartwig, who participated as a student in the Vulcan project, has also stayed involved in the SPARC project and developments.

The course had become an incubator for researchers interested in using the latest technology to reimagine how quickly a fusion power plant would be possible. It helped redirect the focus of the PSFC from Alcator C-Mod, which ended operation in 2016, towards SPARC and ARC, and technology innovation. In the process the PSFC, whose fusion program had been largely funded by the Department of Energy, realized it would also need to expand its research sponsorship to private funding.

The discussions with the private sector brought home the requirement not just for technical feasibility but for making fusion an attractive product economically. This inspired Whyte to add an economic constraint to the 2020 22.63 class project, noting “it changes how you think about attacking the design.” Consequently, he expanded the teaching team to include Eric Ingersoll, founder and managing director at LucidCatalyst and TerraPraxis. Together they imagined a novel application and market that could use fusion as an intense carbon-free energy source – international shipping.

The virtual nature of this year’s course offered the unique chance for a number of students, postdocs and teachers from Princeton University to join the class as volunteers, with the intent of eventually creating a similarly structured course at Princeton.  They integrated with MIT students and instructors into four teams working interdependently to design an onboard method of generating ammonia fuel for ship engines. The device was dubbed “ARCH,” the H standing for Hydrogen. By making innovations to the fusion design, mostly focused on improving materials and heat removal, the team showed they could meet economic targets.

For MIT graduate student Rachel Bielajew, part of the Systems Integration Team, focusing on the economics of the project provided a very different experience from her other classes and everyday research.

“It was definitely motivating to have an economic target driving design choices,” she says. “The class also reinforced for me that the pathway to successful fusion reactors is multidisciplinary and there is important research to be done in many fields.”

Whyte’s teaching journey has been as transformative for him as for his students.

“If you give young people the time, the tools and the imaginative space to work together towards meaningful goals – it’s hard to imagine a more powerful force,” he says. “The class and the innovation provided by the collective student effort have changed my worldview, and, I believe, the prospects for fusion energy.”