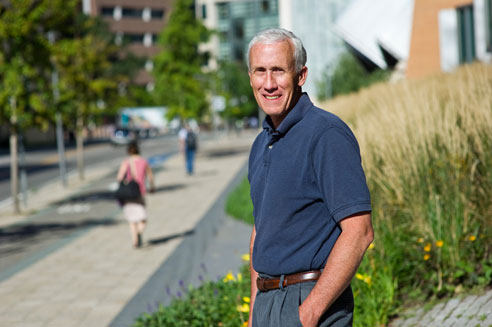 Increasingly powerful computation technology has long been central to the advancement of reactor engineering and nuclear power generation. Few people have played a greater role in that process — or have more knowledge to share — than Kord Smith, the newly appointed Korea Electric Power Company Professor of the Practice of Nuclear Science and Engineering.

Since earning his SM (1979) and Ph.D. (1980) at NSE, Kord Smith has not only developed some of the world’s most widely used software for reactor physics modeling and simulation, but also flourished in business, co-founding a successful company, Studsvik Scandpower, that supplies software for reactor core design, analysis, and operations to a majority of the world’s nuclear utilities and reactor fuel vendors.

A major recognition of Smith’s skills came this year when he was named chief scientist for the Center for Exascale Simulation of Advanced Reactors (CESAR), an interdisciplinary public-private effort of the Department of Energy’s Office of Science aimed at creating an entirely new generation of nuclear-related computing technology. An especially interesting aspect of the program is its emphasis on parallel co-design of high performance computing (HPC) hardware and software, to ensure that next-generation HPC platforms will be ready for use in diverse disciplines such as advanced materials development, combustion engineering, and reactor simulation when machines are delivered in the 2019 time frame.

“Traditionally, hardware gets designed, and then software engineers figure out how to use it,” explains Smith. “But these new machines will see a hardware paradigm shift, with massively parallel processors having much less memory per processor. With traditional methods, we might end up with a machine no one could use efficiently. So we’re doing hardware and software design at the same time, and influencing each other; it’s never been done on this scale before.”

“It’s real high-end computing, and exciting to be on the forefront, but my job is also to keep an eye on practical problem-solving, and make sure what we do can be translated into what industry needs.”

That perspective will also infuse Smith’s classroom work at NSE; he will leverage Studsvik’s Waltham, Mass., training center to give students a hands-on feel for current industrial nuclear engineering practice. “If you want to do something new and unique, your credibility is helped tremendously by an understanding of how things are actually done today,” says Smith. Students will also have the opportunity to participate in the CESAR work, and in NSE’s related engagement with the DoE’s Consortium for Advanced Simulation of Light Water Reactors.

“Over the last 30 years, no one has had a greater impact on the field of nuclear reactor physics than Kord Smith,” commented NSE department head Richard Lester. “NSE’s strategic plan calls for a new, integrated focus on advanced modeling and simulation research and teaching. Kord’s arrival will help greatly in implementing that objective.”

Smith, who earned his bachelor’s in nuclear engineering at Kansas State University, has recently returned to the Boston area after many years living in Idaho, where he pursued mountain climbing, skiing and kayaking, and also served as a back-country and Civil Air Patrol search-and-rescue pilot. He notes, “I finally became a real engineer when I acquired a bulldozer, excavator, and compactor to construct a box-canyon airstrip at our mountain cabin.”

"If you want to do something new and unique, your credibility is helped tremendously by an understanding of how things are actually done today."