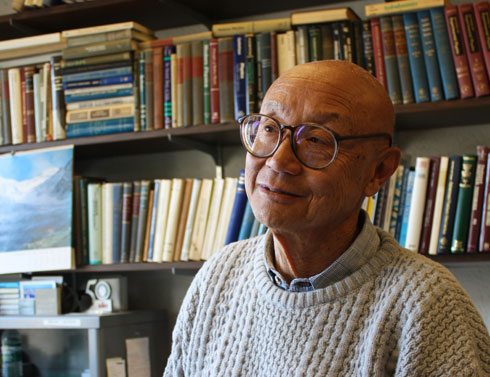 Emeritus Professor Sidney Yip has been awarded the 2012 Robert Cahn Award. The award, given by the Journal of Nuclear Materials, recognizes an outstanding scientist who has a high scientific profile in the field of nuclear materials, the ability to communicate science to a broad audience, and demonstrated interest in breaking down barriers between different scientific disciplines.

In his early years on the NSE faculty Professor Yip made pioneering contributions in the fields of transport phenomena and neutron scattering. He later began a program of theoretical, modeling, and atomistic simulation studies of the properties of crystalline solids which soon established him as an international leader in this rapidly developing field.

He has contributed almost three hundred journal articles and his monographs and handbooks are known around the world. Particularly notable from the early stage of his career is his monograph with Richard Osborn, Foundations of Neutron Transport Theory (1967). More recently the two-volume Handbook of Materials Modeling (2005) he edited stands as the defining reference in the field. The Handbook, a later volume on scientific modeling and simulation co-edited with Tomas de la Rubia, and the many workshops and conference sessions he has organized exemplify his remarkable – and perhaps unique – leadership role in helping to build the worldwide interdisciplinary community of researchers on multiscale materials modeling.

At MIT Professor Yip has supervised almost 50 doctoral students, many of them now pursuing highly productive careers at leading academic and research institutions around the world. Though he retired officially in 2009 after 46 years of extraordinary service on our faculty (the last 9 of them also as a member of the faculty of Materials Science and Engineering),,Professor Yip is still very active in research, and a partial listing of his current affiliations and activities indicates the breadth of his interests and contributions: CASL, the DOE-funded Consortium for Advanced Simulation of Light Water Reactors (where he serves as Deputy Lead for Materials Performance and Optimization); the Concrete Sustainability Hub at MIT; and the BP-funded Materials and Corrosion Center at MIT and the University of Manchester

As the winner of the 2012 Robert Cahn award, Professor Yip will give a keynote lecture at the next NuMat Conference in Japan on October 21-25, 2012.