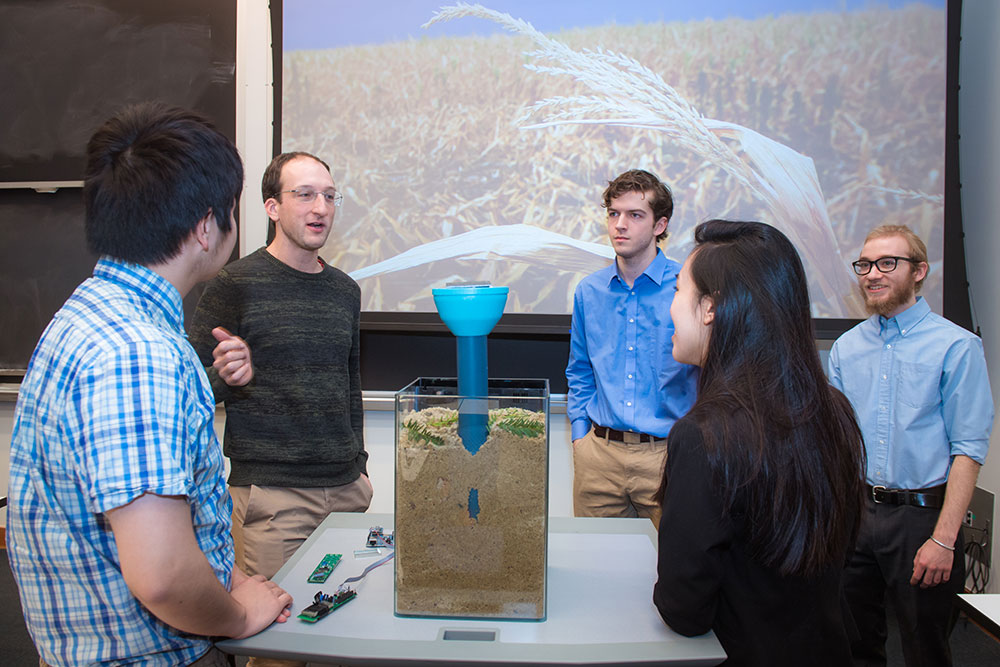 After a nearly five-year effort, fueled by the passionate persistence of faculty and students, Nuclear Science and Engineering (NSE) will be offering a new degree next fall: 22-ENG, a program that offers the same fundamentals in the discipline as Course 22, but with considerably more flexibility in course selection. Institute faculty approved the new degree on April 17th.

“I’m very relieved,” says junior Colt Hermesch, who is in the naval ROTC program. “I discovered I really liked quantum physics late in my academic career, and by switching to the new degree, I can take what I’m interested in and still major in nuclear.”

This is precisely the kind of response anticipated by Michael Short ’05, SM and PhD ’10, undergraduate chair of the department, and Class of ’42 Associate Professor of Nuclear Science and Engineering. In 2014, the department tasked Short with reforming the undergraduate curriculum. He says that 22-ENG was motivated largely by mounting student demand for a path of study in nuclear science and engineering that doesn’t lead exclusively to traditional jobs in the nuclear industry.

“Every year I’ve been advising, increasing numbers of students have expressed interest in focusing their nuclear studies on topics like materials, robotics, policy, or sustainability,” says Short. “These are hybrid fields, fields of the future, but in spite of this growing demand, until now we have had no mechanism in the department for helping them.”

The new flex degree will allow students, once they have completed a cluster of required courses, to focus in such areas as nuclear medicine, clean energy technologies, policy, fusion, plasma science, nuclear computation, nuclear materials, and modeling/simulation. Working with their advisors, undergraduates will be able to map out a customized suite of classes in a nuclear-relevant discipline of their creation.

Sophomore Analyce Hernandez is wasting no time in taking advantage of this new degree option. “I was so excited to hear about it, and rushed to lay out a course map with my advisor,” she says. Hernandez was worried about double majoring in Course 22 and physics, because of the formidable class requirements. “With 22-ENG, I don’t have to choose one over the other.”

Short says he has seen too many students forced to make comparably tough choices. Some, due to personal choices, depart from their true passion in nuclear science for other majors that offer opportunities which they believe can more easily secure them jobs at Google or Facebook. Others “were leaving our major because they can’t pursue subjects they become deeply invested in, often through lab work,” says Short. “People should not be penalized for having gigantic passions that don’t fit into one of our boxes.”

He believes with its larger menu of topics, trimmed requirements, and connection to real-world applications of NSE, 22-ENG will both retain students who might be on the fence about majoring in NSE, and capture new candidates to the field.

“I became interested in NSE as a freshman, and quickly realized I wanted to pursue fusion both for my education and as a career,” Korsun says. But it became clear to him that Course 22 would not allow him break out and explore fusion at the depth he desired. “The current degree is rigorous and demanding, which is great, but it primarily prepares students for traditional nuclear careers or doctorates in fission,” he says.

In conversations with fellow undergrads, Korsun discovered that he was not alone in yearning for alternatives: “A lot of my friends were also interested in pursuing different subfields within NSE, such as materials science and sustainability, but the coursework just didn’t support them.”

Last spring, Korsun decided to act. Working with NSE academic administrator Brandy Baker, Korsun developed suggestions for a flexible degree parallel to those offered by mechanical engineering and physics. “We laid out a reasonable course load, retaining the core requirements, but added choices for specialization,” says Korsun. “We sent the proposal off to Professor Short, and he loved the idea.”

The flex degree idea resonated powerfully for Short because he had been pressing to create something like it for years. “When I started here as an undergraduate in 2001, I worked in Ron Ballinger’s nuclear materials lab, and I loved it — I knew immediately it was my calling,” he says. “But when I began looking for NSE classes that could help get me further into this research, there weren’t any.”

Short’s solution was to major in both nuclear engineering and materials science. “It was intellectually stimulating, and miserable in terms of work/life balance,” he says. Others in his cohort who wanted a deep immersion in a subdiscipline of nuclear would rather change majors and minor in nuclear engineering. So when Short joined the NSE faculty in 2013, he sought opportunities to make the curriculum more welcoming to undergraduates.

That moment arrived the next year, when he was charged with rethinking the undergraduate curriculum. “I said great, I’ve got stuff I’ve wanted to do for a decade,” says Short.

Some of Short’s initiatives were implemented quickly. He found ways to bring hands-on learning to early classes, ensuring multiple modes of engagement to the fundamentals of NSE. The previous theory-first, applications-later curricular framework was viewed by the students and Short as “boring.” Short also sought to trim certain classes from Course 22 that he felt were not essential to mastering the central tenets of nuclear engineering. Eliminating what he calls “dangling ends in the curriculum” — advanced courses like waves and vibrations, and analog electronics — could make room for electives that offered students the chances for immersion in nuclear domains that link more directly to careers. Short had the outlines for the new flex degree.

With the impetus of students like Korsun, and “after much collegial debate,” according to Short, the NSE faculty added 22-ENG to its curriculum.

In sync with institutional reforms

With its debut right around the corner, the new degree promises to position NSE at the vanguard of other large-scale changes at the Institute.

For one, 22-ENG will feature a track for computation “to use the latest advances in computing to solve problems related to nuclear,” says Short. This focus area was suggested by Anantha P. Chandrakasan, dean of the School of Engineering, who wanted to create an explicit bridge not just to computer science, but to the new Schwarzman College of Computing.

“We’ll be first at the front door, since we’ll launch our track before the new college even starts,” says Short. “When students come for computer science, they will know they can direct their studies toward nuclear.”

Adds Dennis Whyte, Hitachi America Professor of Engineering and Head of Nuclear Science and Engineering, “As MIT implements new opportunities for our undergraduates, such as the new college of computing, 22-ENG will serve to grow the evolving demands of our undergraduate student population for a multi-disciplinary education.”

The new major explicitly sets out to span fields. It will, for instance, create a focus area in policy and economics, tying NSE more closely to the School of Humanities, Arts, and Social Sciences. “More than any other engineering discipline, nuclear is inseparable from the social sciences, because when you switch on a nuclear plant, everyone takes notice,” says Short. “Every step we take is ultra-scrutinized by ethicists and political scientists, as it should be.” Beyond the specialty track, Short sees “the social problems of nuclear as inseparable from the program as basic nuclear physics,” and will be working to integrate humanities and social sciences into some of the department’s core courses.
Benchmarks for the success of NSE curriculum changes will emerge not just in the form of higher enrollment, Short anticipates, but in feedback from future employers of NSE students.

“As we send out students with blended skillsets, capable of working in multidisciplinary ways, employers will say, ‘Wow, they’re sending us students both technically expert and well-rounded,’” says Short.

This is the type of graduate, he notes, who could save the nuclear industry, which is sorely challenged economically. “Whether they select advanced reactors or fusion reactors, utilities, policy, or advocacy, our students could move the industry beyond the 1960s,” says Short. “They could give new meaning and substance to the department’s motto, ‘science, systems and society.’”