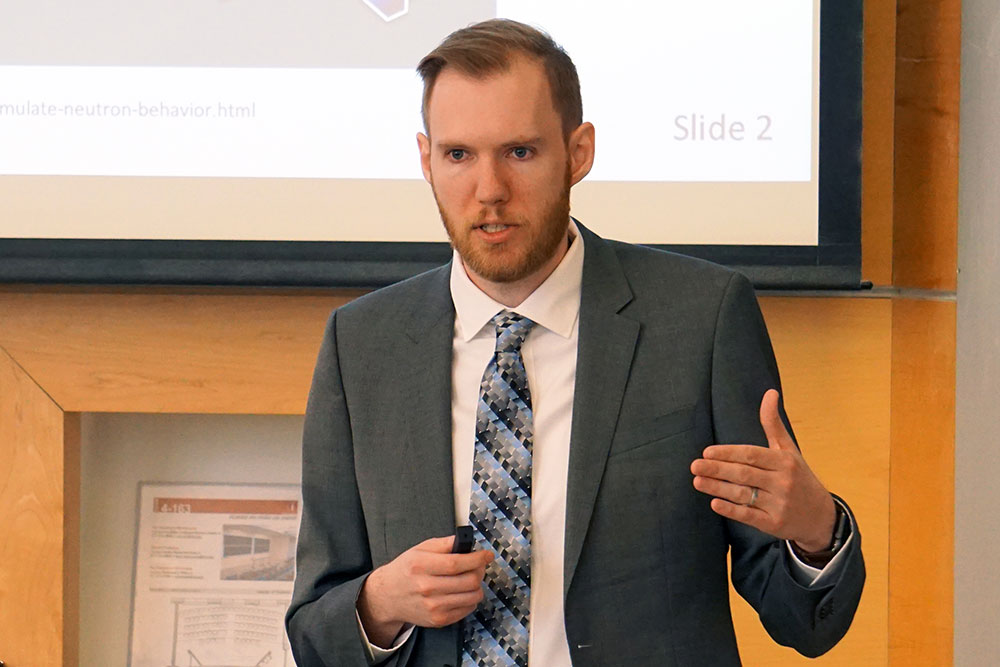 The Del Favero Thesis Prize, established in 2014 with a generous gift from alum James Del Favero (SM ’84), is awarded annually to a PhD graduate in NSE whose thesis is judged to have made the most innovative advance in our field. The winner of the 2018 prize, John Tramm presented his work in a lecture titled “Supercomputers, Physics, and Randomness: Rethinking Neutron Transport From the Ground Up” on April 2, 2019. Tramm is currently a postdoctoral apointee at Argonne National Laboratory.

Accurately modeling neutron behavior in nuclear reactors is essential for the analysis and design of new nuclear fuels and advanced nuclear reactors. While current neutron transport solution methods are accurate, they were developed for current generation nuclear reactor designs and optimized for legacy computer architectures. Tramm’s work builds on a computational neutron transport method based on the Method of Characteristics (MOC). In conventional MOC-based solvers, solutions to the neutron transport equations are repeatedly obtained along paths in the reactor core. These paths are based on fixed grid patterns and the process is iterated until the solution converges. The repetitive, fixed solution process is memory intensive, computationally inefficient on newer computer architectures, and can lead to inaccurate results if the grid spacing is too large. Current MOC solvers also are optimized for existing reactor designs and may not easily solve reactor designs with high degrees of 3D heterogeneity like CANDU reactors or pebble bed reactors.

Tramm developed a new method that solves the same neutron transport equations but uses randomized paths instead of fixed paths. While more iterations are needed to solve the neutron transport problem with random paths, the iterations require a fraction of the memory and are faster to solve, resulting in an accurate solution with similar run time. This random path method was implemented in the Advanced Random Ray Code (ARRC) to solve 3D neutron transport in nuclear reactors. Benchmark tests of ARRC showed that the new method could solve neutron transport problems with the same accuracy and speed of current MOC solvers but with significantly less memory usage and no dependence on grid spacing for solution accuracy. Additionally, ARRC allowed for the solution of advanced reactor designs with non-homogenous cores.