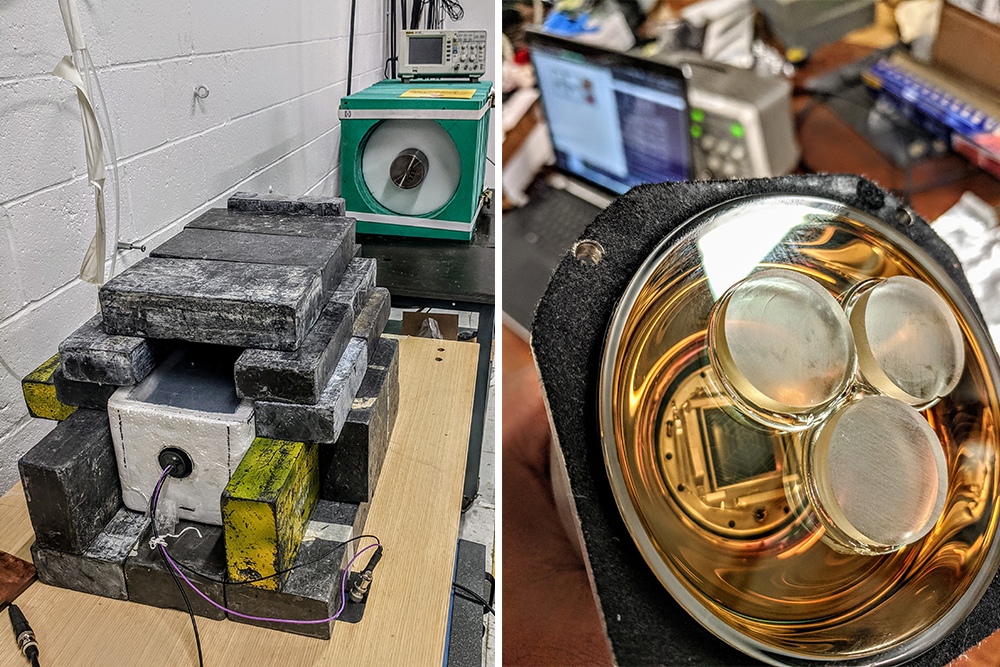 About five years ago, Areg Danagoulian, associate professor of nuclear science and engineering (NSE), became intrigued by a technique developed by researchers at Los Alamos National Laboratory that uses a neutron beam to identify unknown materials.

“They could look into a black box containing uranium and say what kind and how much,” says Danagoulian, who directs MIT’s Laboratory of Applied Nuclear Physics (LANPh). “I was thinking about the problem of verifying nuclear material in warheads, and it just dawned on me, this amazing technology could be applied to what we’re working on.”

But there was a problem: This method, called neutron resonance transmission analysis (NRTA), requires an enormous, expensive apparatus, limiting its utility for the kind of on-site nuclear material applications Danagoulian and his research colleagues focus on. To leapfrog this obstacle, they determined to make NRTA technology portable.

A paper describing the results of this effort—a first-of-kind, mobile NRTA apparatus with the ability to detect the elemental composition of specific materials—appears in the May 13th edition of Physical Review Applied.

“Our fundamental goal was to enable on-site technology that could be used to identify any type of nuclear material,” says Ethan A. Klein ’15, a third-year NSE doctoral student, and first author of the paper. “We were able to demonstrate that even without the large, experimental setups of the national labs, our low-cost, portable system could accurately identify a range of materials.”

NRTA rests on long-established science: When bombarded with neutrons at specific energy levels, the nuclei of some materials will undergo a resonant interaction with these neutrons, and achieve a transition to an excited state. “The nucleus becomes a filter, essentially absorbing neutrons of a particular energy, and letting most other neutrons pass through,” explains Danagoulian.

Scientists have developed a library of unique neutron resonance “fingerprints” for the isotopes of many elements, including metallic chemical elements found at the higher end of the periodic table such as uranium and plutonium, which figure in nuclear power systems and nuclear weapons, and elements from the middle, like silver and tungsten, which serve in industrial contexts. With knowledge of these unique fingerprints, it is possible to identify an unknown, nuclear-reactive material.

This is a technique the national laboratories have mastered: With high intensity, pulsed neutron beams and sensitive detectors, researchers can establish the energy levels of neutrons absorbed by a material and those that pass through, and then map these measurements against the library of isotopic fingerprints.

Researchers from a range of fields have begun experimenting with this technology, including archaeologists seeking to determine the composition of ancient objects. But NRTA’s most profound impact may lie in the nuclear domain. “If you want to find out how much fuel is left in your reactors, you could use NRTA to sample the enrichment level of fuel pellets,” says Naqvi, mentioning one potential application. “Or in arms control to find out whether a warhead set for dismantling is a fake or contains real nuclear materials.”

Bringing samples of such materials to the national labs is generally not practical, with stiff safeguards for nuclear fuel and material used in nuclear arms. Danagoulian’s team set out to design and build an apparatus that could rise to the challenges of on-site NRTA.

Klein, who is devoting his doctoral research to this project, spent months simulating the envisioned technology: a deuterium-tritium generator beaming neutrons through a tube at the target material, with a detector placed just behind. In contrast to the apparatuses at national labs, which can reach hundreds of meters in length, the team’s entire set-up occupied just three meters, and could be moved around by one person. There were challenges, though.

“These neutrons are produced at high energy and we had to find a way to slow them down to produce as many neutrons as possible at the energies of interest,” he says. “Shielding was also a major issue,” adds Naqvi. The “cocktail of neutrons at different energies” dancing off walls and equipment, and the gamma rays produced by nuclear reactions, she says, creates a kind of noise that obscures detection of neutrons transmitted through and those absorbed by the target.

The researchers jury-rigged a version of their apparatus using mail-order components and “a neutron source we’ve had at MIT since 1997 that had been collecting dust on a shelf,” says Klein.

They weren’t so lucky with timing. Just as they were ready to begin their experiments, the pandemic shut down laboratory facilities at MIT. Klein had to monitor from afar when the other researchers conducted initial tests at Princeton’s Plasma Physics Laboratory, under the direction of Robert J. Goldston. They used tungsten as the target material because of its strong resonances. “We had a suboptimal setup, but I saw very faint signals, and I said, ‘There is hope,’” says Danagoulian.

After a return to MIT’s secure vault testing location and several months of iterations to reduce background neutron noise, “we had proof of concept,” says Naqvi. “We could actually identify elements like indium, silver and uranium, and we didn’t need big devices.”

“Our setup went from something that wasn’t very sensitive to strong signals, to something sensitive to very faint signals,” says Danagoulian. He believes the pandemic might have helped in a strange way, with the team doing their homework and preparing for months while itching to begin experiments, and then working very intensively when they secured rare windows of opportunity in the lab. “Counterintuitively, it contributed to rapid progress,” he says.

The team’s method does not yet capture data at the high resolution of the national labs, which have a precision to see even smaller and fainter signals of neutron energies. But in multiple experiments, their apparatus successfully measured neutron absorption and transmission through four different targets, matching isotopic fingerprints to infer the composition of target material.

“This is powerful technology, encumbered and inhibited in the past by enormous cost and inaccessibility,” says Danagoulian. “And now we have taken away that cost and size barrier.” He estimates a price tag of less than $100,000 for portable NRTA, versus hundreds of millions for the national labs’ equivalent.

Glen Warren, leader of the Safeguards and Arms Control Team at the Pacific Northwest National Laboratory, finds the team’s work “quite innovative.” On the basis of this research, he is collaborating with Danagoulian on a National Nuclear Security Administration/DOE-funded project exploring the application of NRTA in arms control. Warren says MIT’s compact apparatus “may enable in-field measurements… to confirm that an object presented as a warhead contains nuclear material, which improves our confidence that the object is a warhead.”

Danagoulian’s team is currently preparing a paper summarizing experiments that show their technology can also detect the amount of an element in a target material. This could prove vital in nuclear safeguards program, where determining precise quantities of uranium and plutonium, help distinguish between the real thing and a fake. And they continue to refine the apparatus to improve the resolution of measurements.

Real progress in nuclear arms verification and other areas of nuclear security requires not just technological breakthroughs, but a willingness to embrace these new approaches. To that end, Danagoulian is working with partners in the national labs, scholars, and policy decision makers. “We are communicating our results to the scientific, technical, and policy communities,” says Danagoulian. “There might be down sides and there might be opportunities. We will identify both, fix the downsides and pursue the opportunities.”