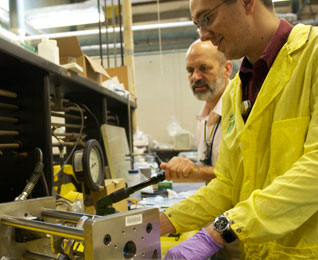 Uranium fuel for common pressurized water reactors typically comes in pellets, which are then inserted into slender four-meter-long tubes to form fuel rods. Several thousand of these tubes reside in a reactor’s core, where they provide an interface between the reacting uranium and cooling water flowing through the core. Their working conditions are exceedingly harsh, in a chamber pressurized to over 150 atmospheres, filled with about 300-degree Celsius water, and bombarded with intense neutron radiation.

The Nuclear Reactor Laboratory is one of just a few university sites that can duplicate these commercial-reactor conditions for experimentation, and it has been an ideal test bed for NSE doctoral student David Carpenter, who is researching new cladding material that could make fuel rod tubes stronger and more durable.

Since the very first commercial water reactor in 1957, (except for a brief period where stainless steel was used as cladding), the standard fuel cladding has been a zirconium-based metal called zircaloy. While it has a good track record, zircaloy becomes more susceptible to failure as its time in service increases, so fuel rods are withdrawn from service preventively despite having substantial remaining capacity to produce energy. In addition, investigations of the Three Mile Island accident found that a stronger cladding material would have better handled the incident’s core-melting conditions, and might have averted some of the problems that arose during shutdown.

An improved cladding material could thus offer better safety margins and reduced maintenance, while also allowing a greater portion of the uranium fuel to be burned safely – a move that could reduce waste.

While the goals are clear, a basic challenge remains. As NRL Principal Research Engineer Gordon Kohse observes, “the materials choices for reactors are somewhat limited.” He notes that cladding must exhibit strength, stiffness, gas impermeability, and other characteristics, and also withstand neutron radiation. “A material might be fabulous, but if it absorbs too many neutrons or transmutes into a troublesome material that is highly radioactive or neutron hungry, you can’t use it.”

Silicon carbide (SiC) has emerged as an outstanding candidate to succeed zircaloy; SiC fibers can be wound onto a hollow ”monolithic” tube of SiC and cemented in place with an external layer of SiC. This results in a composite tube that is the same size and shape as traditional zircaloy cladding. SiC’s working qualities include excellent strength at high temperatures, an order of magnitude less chemical reactivity with water or steam, very low neutron absorption, and resistance to radiation damage. “It is fortunate that silicon carbide, a material that has the mechanical and chemical properties we’re looking for, is also neutronically reasonable and radiation resistant,” says Kohse.

Evaluating SiC’s performance through computer simulation and reactor irradiation has been the main focus of Carpenter’s Ph.D. work, which began in 2007. “Part of it is building fundamental knowledge of how SiC behaves under reactor conditions, but we’re also trying to improve the material,” says Carpenter. “It’s a lot like metals – you can forge steel, but the exact conditions and additives and the forging process have a huge impact. The same is true of SiC. After running a wide variety of specimens in the reactor, I was surprised to learn how much depends on careful manufacturing and control of conditions.”

Carpenter intends to carry on his work as a postdoc with Kohse and Prof. Mujid Kazimi, director of the Center for Advanced Nuclear Energy Systems. Several companies and organizations, including Ceramic Tubular Products, Westinghouse Electric Company, the Electric Power Research Institute, and the US Department of Energy, are supporting the efforts, with an eye towards scaling up production and pursuing commercialization of the technology.