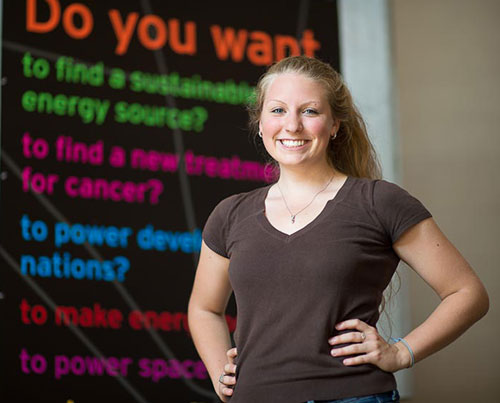 Ekaterina (Katia) Paramonova ’13 acknowledges starting Course 22 with some distinct advantages: both her father and grandfather work in the nuclear industry, and her Russian parents insisted on fluency in the language, opening up opportunities in another country with a well-established nuclear sector. Now this 19-year-old undergraduate is intent on leveraging her assets in some surprising ways, establishing a unique career track that intriguingly combines nuclear engineering and diplomacy.

“The nuclear world is quite small. There are not many of us who have an education or experience in nuclear,” says Paramonova. “In order to be successful, we need to work together.” In pursuit of this end, Paramonova is trying to engage with people in the field, especially other students.“ There’s definitely a high demand for young minds in nuclear, with a huge age gap between older experts and the next generation.” When she learned of Russia’s AtomExpo, an international conference whose 2012 theme was “Nuclear Power Industry Worldwide: One year after Fukushima,” she determined to organize a group of MIT NSE students to attend. “My vision was to start some communication between Russian and American students and discuss ways we could be helping each other.”

Paramonova discovered a Russian nuclear engineering student on LinkedIn who helped recruit other Russian students as well as garner sponsorship from TVEL, a Russian nuclear fuel company, for entrance fees to AtomExpo. Paramonova also found additional financial backing from MIT NSE and the SkTech-MIT Initiative. After working out visas, flights and hotels, Paramonova took off for Moscow with a group of 10 NSE undergraduates, graduates and faculty for the three-day conference in June. There were few other U.S. participants, she notes. “We not only gave MIT a good face, but made the U.S. look good, too.”

AtomExpo opened a window for Paramonova not only on the academic and research challenges facing her Russian student peers, but issues facing the international nuclear community. The nuclear catastrophe in Fukushima has greatly affected the nuclear industry in other countries, and Paramonova worries that in the face of negative public opinion, nuclear energy may not attract adequate numbers of science and engineering students. “We need more people who are passionate, and understand the need for clean energy,” she states. “My life goal is to make sure we’ve got a solid nuclear energy source as part of that mix.”

Focused on this goal, she continues to find ways of connecting with peers around the globe, collaborating on such key areas as nanomaterials, closing the fuel cycle, and fast reactors. “There is no reason to compete when working on similar technologies, when we could be helping each other.” She moderated a panel on innovation and strategic planning for the next International Youth Nuclear Conference in August 2012.

Paramonova’s ambitions stretch well beyond international networking. She has begun building a solid foundation in research, which includes modeling boiling water reactor cores (at Westinghouse) and shooting neutrons at copper isotopes in the MIT reactor, in a project with the Oak Ridge National Laboratory — “older types of technology,” she says. With the dream of eventually “working on cutting- edge types of things,” Paramonova headed back to Moscow in summer 2012 for researchon a highly advanced nuclear project: ITER, the International Thermonuclear Reactor. She was brazing (welding) and analyzing different materials exposed to a range of temperatures, to determine which might function best inside the ITER core. After she gets her undergraduate degree and a masters in nuclear engineering, Paramonova says she plans to get a Ph.D. in France (“the third key player in nuclear”), and ultimately work in some capacity with fast reactors.

While she admits her good fortune as she sets out on a career in the nuclear field, Paramonova does not doubt that other undergraduates can find equivalent opportunities. “If you don’t have high expectations for yourself, you won’t be able to start something new and interesting.” She encourages peers to cast off the “MIT mindset,” that “pressure to take nine classes per semester.” Instead, she says, “force yourself to go to random seminars — you might be enthralled and find your new passion.” And by all means, sign up for conferences off campus. “You never know who you’re going to meet on a plane.”

“We need more people who are passionate, and understand the need for clean energy — my life goal is to make sure we’ve got a solid nuclear energy source as part of that mix.”