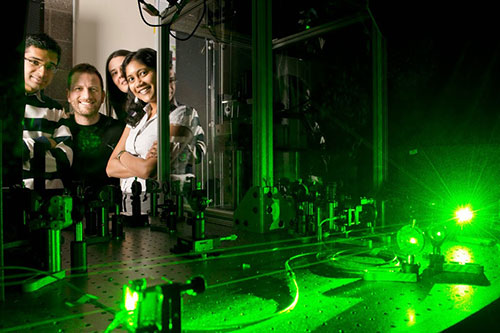 In can be difficult to distinguish between basic and applied research in the nascent field of quantum engineering. One person’s exploration of quantum systems like atoms and electrons yields another’s building block for quantum computers, and vice versa. Paola Cappellaro’s lab operates at the interface of basic and applied research. “We sometimes go more in one direction and sometimes more in the other,” she said.

Cappellaro works with nanoscale diamonds that contain a defect consisting of an embedded nitrogen atom next to a gap in the diamond crystal. If you had a large enough gem-quality diamond with this type of defect throughout, it would be pink. These nitrogen vacancy, or NV, centers have spins that can be readily controlled, said Cappellaro, who is an Associate Professor in the Department of Nuclear Science and Engineering and holds an Esther and Harold E. Edgerton Career Development Professorship.

Atoms and electrons have a spin, or orientation, that’s up or down — similar to the two poles of a magnet. Unlike ordinary magnets, however, atomic and subatomic spins can be a mix of up and down at the same time. This superposition of spins is the source of the fuss about quantum computing. If you use the up and down of a particle’s spin to represent the 1 and 0 of a bit, then a quantum bit, or qubit, is both a 1 and 0 at the same time. A string of qubits, therefore, can represent a phenomenally large range of numbers. This opens the possibility for computers that can crack virtually any secret code or search huge databases in the blink of an eye.

One thrust of Cappellaro’s research is how information is transferred in a chain of spins. Transferring information between qubits is critical for being able to build quantum computers, Cappellaro said. “What you would like to have is not only computing units, but also some wires to connect them.”

NV centers are also potentially useful beyond quantum computing. They’re very sensitive to magnetic fields. “You can use this spin, which is basically just a magnetic dipole, just like a compass, to sense an external magnetic field,” she said.

These miniscule magnetic sensors can detect magnetic fields from extremely small, closely spaced objects. One potential use is inspecting magnetic bits in the production of data storage devices. Unlike most quantum devices, the NV center magnetometer operates in a wide range of temperatures, she said. This opens the possibility of detecting magnetic fields from superconducting devices, which operate at very low temperatures.

Another possibility is detecting magnetic fields inside living cells. For example, neural cell signaling operates via exchanges of ions, which are positively or negatively charged atoms. In theory, an NV center magnetometer could monitor neural cell functioning, Cappellaro said.

Knowing that her research could have a significant impact in practical applications like these is very satisfying, but Cappellaro is also motivated by basic science. “Very often what drives us is intellectual curiosity about how our system behaves,” she said. “It’s nice to be able to go toward both directions at the same time.”