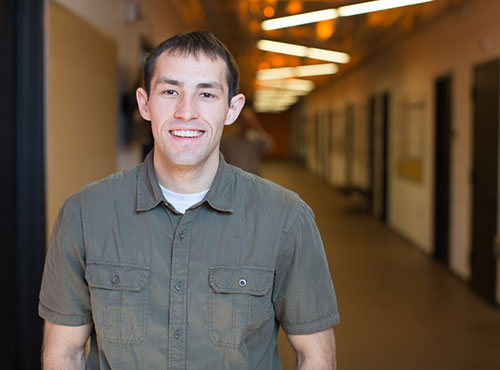 After tinkering for months with thousands of lines of computer code, Benjamin L. Magolan believes he is finally getting somewhere: “I’ve had a breakthrough with my implementation and now everything is coming together,” he says. “I’m capturing the appropriate turbulence trends in my model.”

A master’s student in Nuclear Science and Engineering (NSE) with a focus on computational fluid dynamics (CFD), Magolan has been devising and testing algorithms to help model the flow of coolant water inside the core of a nuclear reactor. This work, which offers insights into many reactor thermal-hydraulic phenomena, recently won him a Rickover Fellowship in Nuclear Engineering.

His project is part of a $122 million Department of Energy initiative, the Consortium for Advanced Simulation of Light Water Reactors (CASL), which aims to create a virtual nuclear reactor. An ensemble of state-of-the-art codes, including the one Magolan is collaborating on, is intended to both improve operating and safety performance of the current generation of commercial reactors and help shape the future of nuclear power generation.

“It’s exciting and cool that files I create might someday be essential in the design of the next generation of light water reactors,” Magolan says.

In early spring, Magolan was finishing up a paper describing his contributions to a CFD code, called Hydra-TH, created at Los Alamos National Laboratory. Magolan’s work involved the code development, implementation, and validation of an advanced turbulence model in Hydra-TH. This model, once fully integrated into the code, will characterize and predict the highly complex behavior of coolant water as it rushes up through assemblies of fuel rods in a reactor core.

Under the direction of NSE Assistant Professor Emilio Baglietto, Magolan tests his contributions on a personalized version of the Hydra-TH code, “playing with it to get it to work,” he says. This means he compares measurements of coolant water behavior in actual, small-scale reactor assembly experiments against his CFD simulations. His work will then be incorporated into the full version of Hydra-TH.

Until recently, researchers have not been able to capture with high-grain precision the twisting paths, velocity, and temperature profiles of water as it shoots through fuel-rod assemblies. “The whole purpose of my work is to predict the turbulence-driven secondary flows that cause the coolant to spiral through reactor fuel assemblies,” says Magolan. “Capturing this behavior leads to better flow predictions.”

To Magolan’s satisfaction, the rigorously defined mathematical equations he has been integrating into the Hydra-TH code are starting to match data capturing the idiosyncratic geometries and characteristics of coolant water in real single-phase nuclear assemblies for pressurized water reactors — reactors where water heats up, but doesn’t boil.

He is only half-way through his validation study, but when his parts of the code are perfected and combined with comparably sophisticated software models of other reactor behaviors (such as materials design and reactor physics), the result will be a fully functioning simulation of a nuclear reactor. This model, unlike an operating nuclear plant, can serve as an experimental subject “to test and examine reactor scenarios that are too difficult or expensive to study by experimental means,” says Magolan. This virtual plant will model novel methods for optimizing reactor operation while sustaining vital safety margins.

Implementing and validating code for the Hydra-TH program will satisfy the requirements for Magolan’s master’s degree, but it is just the first step in his graduate research. As a doctoral student next fall, he will be creating his own multiphase turbulence model. “I will be trying to develop a new model that will better predict how both liquid and vapor interact to influence turbulence structures as they move through a reactor,” he says. “It’s going to take a lot of work to move this forward.”

These next few years of research will be supported by the Rickover Fellowship, sponsored by the Naval Reactors Division of the Department of Energy. As part of the fellowship agreement, once Magolan earns his Ph.D. he will work at the Knolls Atomic Power Laboratory near Albany, designing and modeling nuclear reactors for Navy submarines.

While Magolan’s immediate future revolves around nuclear engineering, he notes that his research in computational fluid dynamics can be applied to optimize many systems. “It’s a tool you can use to model flow for a myriad of engineering applications, including submarines, rockets, airplanes, or cars,” says Magolan. “If I learn it well, I could take many routes in my career, and do different things. It’s the kind of flexibility I really like.”

“If I learn it well, I could take many routes in my career, and do different things. It’s the kind of flexibility I really like.”