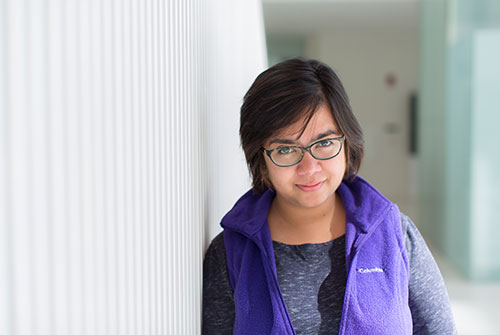 Aditi Verma’s first encounter with nuclear policy was nearly her last. She represented Germany at a high school version of the International Atomic Energy Agency (IAEA), and was frustrated by the debate on her group’s topic, nuclear waste. “We had to pass resolutions, but without a science and engineering background, people couldn’t really negotiate,” she recalls.

Today, Verma wonders if this experience paradoxically sparked her interest in the field. A doctoral student in nuclear science and engineering, Verma has spent her academic career acquiring the expertise in science, engineering and the social sciences required to make sense of complex policy questions that arise around nuclear energy. Her studies have included an internship at the actual IAEA.

Verma’s dissertation, entitled “Towards an International Nuclear Safety Framework,” highlights her distinctive, interdisciplinary approach. She draws on sociology and political science theory and practice, as well as quantitative analysis, to solve what she calls an “empirical puzzle”: how the U.S., French and Russian nuclear programs developed different safety practices in spite of starting with similar technologies, and in the case of France, a reactor design identical to and originating from the US (a type of pressurized water reactor).

Interviewing plant designers, operators and regulators, as well as analyzing historical data and reviewing trade publications, Verma is teasing apart the divergent safety institutions that have evolved among the three nations. She has already detected sharp differences between the United States and France, where she spent the past summer applying her recently acquired French language skills.

“In France, if they think of something that can go wrong with a reactor, even if the probability is very low, they will fix it.” There, “regulators are constantly talking to designers, and setting safety objectives, with the idea that safety is something that must improve continuously.”In the U.S., says Verma, “it’s more about establishing metrics and constantly being sure that quantitative targets are being met.”

About to start the field leg of her Russian research, Verma has begun the process of detailing the varied national approaches to nuclear safety.Her conclusions may be of interest to the 30 or more nations, mainly developing economies, currently pursuing nuclear energy.  “ If you’re trying to get into the game, you look around and see that different countries have different templates for doing things,” says Verma. “This raises questions: Is one way better than another, do different approaches matter, or are all of these people aiming for the same level of safety?”

Access to abundant, clean energy has preoccupied Verma since her childhood, where the Indian cities she lived in were frequently beset with power outages. A physics whiz, she entered MIT as an undergraduate and immediately focused on nuclear science.  “I was eager to get started applying my knowledge to a problem I cared about, which happened to be energy.”

During junior year, Verma experienced what she describes as a watershed moment in her studies: She enrolled in Managing Nuclear Technology (22.812J), a graduate-level class taught by her advisor, Richard Lester. The course examined such nuclear industry issues as waste management and weapons proliferation. “I didn’t realize until then that you could bring economics, management and policy insights to bear on nuclear projects,” says Verma.

She has been adding to her multidisciplinary toolkit ever since, applying both social science methodologies and quantitative technical analysis to explore, for instance, how the Indian nuclear energy program plans to meet its mid-century nuclear capacity targets, and effective ways for aspiring nuclear nations to develop a skilled workforce. With R. Scott Kemp, NSE assistant professor, she is organizing a reading group for fellow graduate students that will apply concepts from philosophy, linguistics, architecture, and data sciences to problems in the design and safety of nuclear technologies.

“At first it was hard to think like a sociologist or political scientist about a part of the world I was so used to contemplating as an engineer,” says Verma. “But now jumping between two worlds is completely fascinating.” She believes this “dual way of looking at things” will help in a career she hopes will involve both studying and shaping nuclear industry policy. “I like the idea of being driven by questions, and with no disciplinary boundaries, finding the right tools and people to explore those questions.”

“I like the idea of being driven by questions, and with no disciplinary boundaries, finding the right tools and people to explore those questions.”