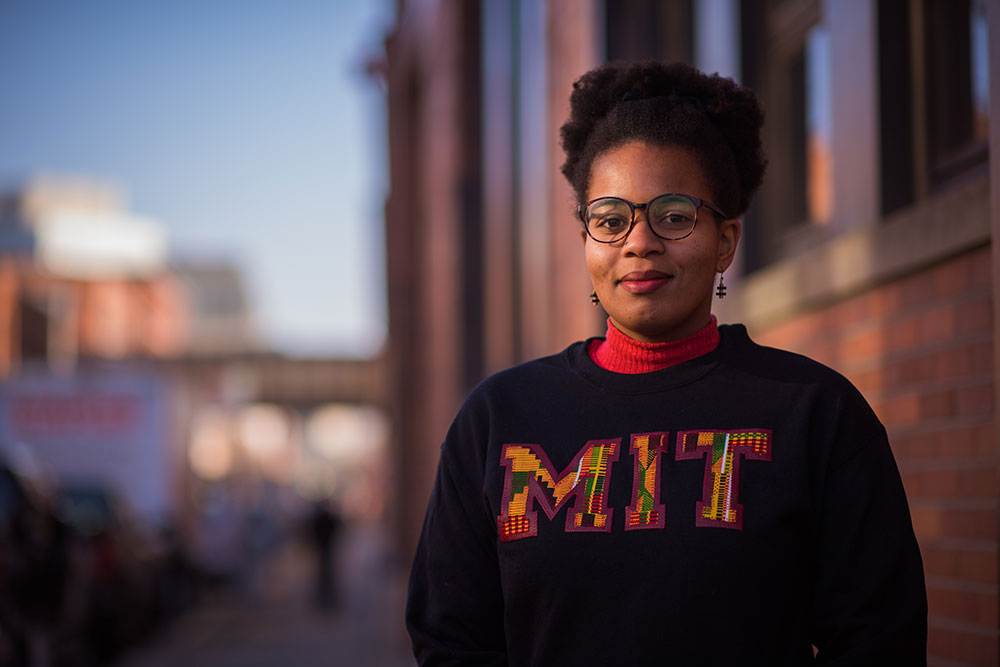 One of the most important aspects of MIT’s educational mission is preparing students to be effective members of their scientific and technological communities. For Raspberry Simpson, that process began when she was a 17-year-old participant in the MIT Summer Research Program (MSRP); it is reaching fruition today as she pursues her doctorate in nuclear science and develops novel diagnostics for inertial confinement fusion and high energy density physics experiments at some of the country’s most advanced research facilities.

In 2010, Simpson (then a student in Bard College’s Early College program) worked with physics professors Lindley Winslow and Janet Conrad at the Laboratory for Nuclear Science. In addition to their academic work in the MSRP, she recalls, “they put it into my mind subconsciously that MIT was a place for me, that I could do science and be accepted in this space. I can’t emphasize enough how important that is.”

Shortly afterward, Simpson transferred to Columbia University to complete her bachelor’s degree in applied physics. During that time she took a year off from study to assist Winslow with development of a neutrino detector, and work on astrophysics experiments at Los Alamos National Laboratory, where she got important mentoring.

“I really enjoyed the national laboratory environment; it’s really special to have that many scientists in one place working towards a similar goal,” says Simpson.

In large part because of her experience in MSRP, which seeks to motivate members of under-represented groups to pursue graduate education, Simpson applied to MIT Nuclear Science and Engineering for her PhD studies. “I felt I had a science family here,” she says. “Also, Mareena Robinson, who did the MSRP at the same time I did, was in the PhD program. Having representation from women, especially black women, in the department was a huge factor in me wanting to come back.

Today, a primary focus of Simpson’s is working on developing diagnostics that allow the assessment of the performance inertial confinement fusion (ICF). There has been a recent surge in optimism about fusion becoming a practical, plentiful, carbon-free energy source, with increased private funding and several private companies (including MIT spinout Commonwealth Fusion Systems) announcing roadmaps for demonstration fusion power plants by the mid-2020s.

To achieve that, ICF compresses pellets of hydrogen isotopes deuterium and tritium (DT) to such extremely high temperatures and densities that the isotope nuclei fuse. This creates a heavier nucleus while releasing large quantities of heat in the form of neutrons. Work to date has been promising, but researchers have struggled to extract the full measure of energy from the process.

“The problem we’ve noticed is that there are lots of asymmetries in the implosion — if you think about trying to compress a basketball to the size of a pea, it would be difficult to keep it perfectly spherical,” explains Simpson. “That leads to inefficiencies.”

Simpson is working to develop new ways of measuring and characterizing these asymmetries during the implosion, using a pair of orthogonally positioned charged-particle instruments to measure the spectra of deuterons (deuterium nuclei) scattered during the process. The approach allows inference of variations in density and symmetry.

“Fusion is very complex, and you need as many diagnostics and as much information as you can get to understand the dynamics of these experiments,” notes Simpson, whose role at MIT’s Plasma Science and Fusion Center also connects her to the Center’s research into magnetic-confinement fusion, the other leading potential path to energy production.

The project is supported by grants from the U.S. Department of Energy (DoE) and the University of Rochester’s Laboratory for Laser Energetics (LLE); Simpson has worked on several projects at the LLE’s Omega laser facility, a key research resource for fusion and other high-temperature high-density phenomena.

In addition, Simpson was chosen this year for the inaugural class of the DoE’s National Nuclear Security Laboratory Residency Graduate Fellowships, which support long-term security-related study and research at national labs. She will build a charged-particle spectrometer for a group under Tammy Ma at the National Ignition Facility at Lawrence Livermore National Laboratory, which is using a high-intensity petawatt-class laser to generate highly accelerated ions for use in radiography of a variety of targets.

Simpson recently passed her NSE qualifying examinations, and will be turning her attention to her dissertation, writing about the two pieces of work mentioned above, and an additional project that utilizes knock-on deuterons for imaging of ICF asymmetries.

“Our group in the High Energy Density Physics Division has lots of fingers in lots of pies, like fusion, high energy density science, and astrophysics, so my dissertation will include multiple projects,” says Simpson. The group recently received a prestigious Center of Excellence award from the National Nuclear Security Administration

Looking ahead, Simpson says she would enjoy working at a national laboratory, because of both the research culture and labs’ role in cultivating new generations of scientists. “The national labs have a deep understanding of the value of students, and they wouldn’t exist without continued stewardship of student talent, and I’d like to position myself in that environment. I’m not mentoring yet, but eventually I would like to give back in that way.”