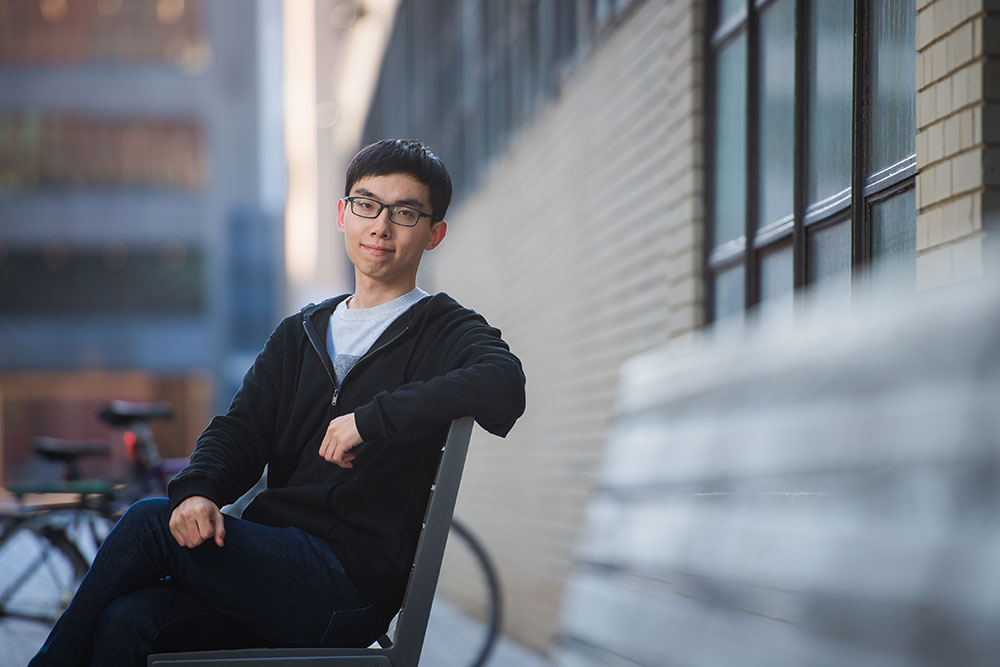 If Changhao Li were to trace the origins of his love of nature, he would point to the time when he was nine, observing the night sky from his childhood home in the small town of Jinan, China. “At that moment I felt that nature is so beautiful, I just wanted to go outside the earth, to go to the moon or even Mars,” Li remembers.

That childhood dream seeded his love of physics, which he pursued through middle and high school, and eventually at Xi’an Jiaotong University in China.

Li’s passion for the skies has since taken a more earth-bound and microscopic form: It has translated into a love of quantum physics. Li is a fifth-year doctoral candidate in the Department of Nuclear Science and Engineering (NSE) and researches quantum information science, including quantum sensing and computation, with Prof. Paola Cappellaro.

The primary thesis driving quantum information science is that altering the state of a material at a subatomic level can make a significant impact at much larger scales. Quantum computing, for example, depends on the most minute changes in material properties to store and process more information than a simple classical binary mode could.

The basic unit of information in quantum computing, equivalent to a bit in classical computers, is called a qubit. Exploiting defects in material structures is one way to manufacture these qubits.

An aspect of Li’s research focuses on defects in very small diamonds, some of which are on the nanometer scale. Experiments involve introducing an atomic-scale defect, known as nitrogen vacancy centers, in these diamonds, and subjecting the defects to extremely minute perturbations, using microwaves or lasers, to create and control quantum states.

One of Li’s projects measures the fluorescence emitted by a disturbed diamond to give us more information about the external stimulus. Just like you would measure an oven’s temperature to gauge how hot it is, measuring the fluorescence emitted by such a defective diamond can tell us what it is sensing and by how much. For example, a sensor that could detect even a few hundreds of strands of the SARS-CoV-2 virus that causes COVID-19, is one of the applications that Li is exploring with his colleagues.

In Physical Review Letters, Li has published findings from another research project which evaluates the symmetry of quantum systems. To explore the properties of quantum systems, we need to understand how the quantum states behave over time and their symmetries are important. “Engineering a system with desired symmetry is a non-trivial task,” Li says, “quantum properties are very unstable because they can interact with the environment. We need a very good lifetime for our qubits and here we developed a method to control and characterize such a system,” Li adds. Yet another research focus, the findings from which are soon to be published in Science, focuses on simulation of a tensor gauge field using defects in diamonds, which is related with fundamental science.

Li says understanding quantum information is primarily about studying basic science. “The basic principles of this world are beautiful and can explain many interesting phenomena,” he points out, “This allows me to explore the universe, to understand how nature works,” Li adds.

A passion to understand how nature works, whether at the scale of stars or a small quantum unit, has galvanized Li’s interest in physics ever since he was a boy.

His parents encouraged his love of physics and a middle school teacher taught him to think critically, to spot errors in his textbooks and not swallow information as truths. “You need to run simple experiments to find the truth for yourself,” was the lesson that Li took away from middle school.

With that lesson safely tucked away, Li found high school to be a little more challenging and initially placed toward the middle of the nearly 1,000 students. But hard work and learning from others steered him toward the top.

Placing top of his class in both middle and high school, Li went on to pursue physics at Xi’an Jiaotong University, about 600 miles west of Beijing. It was his first time away from home and found his schooling needed a boost in topics like linear algebra. Again, hard work paid off and Li graduated top of his class.

University gave Li the ability to study in the United States for parts of his sophomore and junior years of college. Through exchange programs, Li attended University of Notre Dame for two months of summer research in 2015 and attended the University of California, Berkeley, during 2016, his junior year. The trips reinforced one of Li’s favorite quotes: “The man who travels far, knows more.”

Notre Dame was Li’s first time abroad — he remembers trying to get used to hamburgers and fries, a radical departure from the traditional Chinese food he loves.

It was research at Berkeley — he remembers the university library and dining halls fondly — that cemented his love of quantum physics. By the time he returned to China he knew he wanted to attend graduate school and pursue research in the field. MIT’s NSE beckoned as a chance to “work with the most brilliant people in the world,” Li says. Cappellaro is his inspiration — “she taught me how to think about research, I am very grateful,” he says.

Spare time finds Li relearning Chinese cooking — his parents do help with tips — and playing mobile games such as Arena of Valor with friends. Learning to play the guitar has been his pandemic hobby.

His fundamental love of nature and in learning how things work, continues to inspire Li. “I’m focusing on the tiniest of things and there’s something really wonderful there. It’s about nature too, right? If you learn about how this tiny thing works, you can maybe also learn how the bigger things work,” Li says.