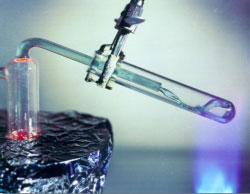 MIT has been awarded $7.5 million as part of a new initiative by the Department of Energy to support research and development on the next generation of nuclear technologies. Funded through the DOE’s Nuclear Energy University Projects (NEUP), the Integrated Research Projects (IRPs) were established to help ensure that the country maintains a leading role in nuclear energy research.

The Department of Nuclear Science and Engineering and the MIT Reactor Lab will work together with their partners at the University of California at Berkeley (UCB) and the University of Wisconsin at Madison (UW) on the project over the next three years to develop the path forward to a test reactor and ultimately a commercial high-temperature salt-cooled reactor (also called a Fluoride-salt High-Temperature Reactor [FHR]).

This new combination of existing technologies creates the possibility of a large power reactor where catastrophic accidents would not be credible. The Three Mile Island and the more recent Fukushima accident resulted from radioactive decay heat generated after the reactors were shut down that overheated and destroyed fuel.  The FHR fuel and coolant combination may allow decay heat to conduct to the environment without massive fuel failure even with large-scale structural and system failures. 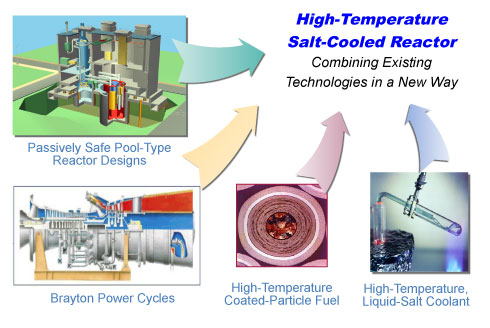 “The long-term goal is an economic high-temperature reactor for more efficient electricity production and liquid fuels production that can’t have a large-scale accident”, said Dr. Charles Forsberg, Senior Research Scientist at the Department of Nuclear Science and Engineering and the lead PI on the MIT project. “Our research goal (with our partners at UCB and UW) is to develop the concept sufficiently that a decision can be made to proceed to the next step—a test reactor.”

MIT leads the project and will irradiate materials in liquid salts at prototypic conditions in the MIT reactor and conduct other experiments to validate reactor models and viability. The University of California at Berkeley will conduct thermohydraulic experiments using stimulants to predict heat transfer and accident behavior, and the University of Wisconsin at Madison will undertake corrosion experiments on candidate materials of construction. MIT and UCB will be developing pre-conceptual designs of a test and commercial power reactor.

“These projects are critical to research aimed at advancing our domestic nuclear industry and maintaining global leadership in the field,” said U.S. Energy Secretary Steven Chu in a press release. “Through these investments we are also training and educating the next generation of leaders in the U.S. nuclear industry to help build a strong new energy economy.”