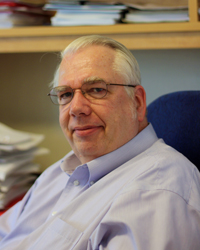 Dr. Charles Forsberg directed the MIT Nuclear Fuel Cycle Study, is the Director and principle investigator for the MIT Fluoride Salt-Cooled High-Temperature Reactor Project, and the Idaho National Laboratory University lead for Hybrid Energy Systems. Before joining MIT he was a Corporate Fellow at Oak Ridge National Laboratory (ORNL). He is a Fellow of the American Nuclear Society (ANS) and the American Association for the Advancement of Science. Dr. Forsberg received the 2002 ANS Special Award for Innovative Nuclear Reactors (Fluoride-salt-cooled high-temperature reactors and PIUS-BWR), and in 2005 the American Institute of Chemical Engineers Robert E. Wilson Award in recognition of chemical engineering contributions to nuclear energy, including his work on reprocessing, waste management, repositories, and production of liquid fuels using nuclear energy. He received the 2014 Seaborg Award from the ANS for advancements in nuclear energy. He holds 11 patents and has published more than 250 papers. He is a licensed professional engineer.

The FHR is a new reactor concept (pdf) developed within the last decade (pdf) with the goal to create a reactor with three characteristics: (1) increased revenue by 50 to 100% relative to a base-load nuclear plant, (2) the enabling technology for a zero-carbon nuclear renewable electricity grid with variable power plant output while the reactor core operates at steady state and (3) no major fuel failures and thus no significant off-site consequences under severe accident conditions.  The FHR couples a high-temperature salt-cooled reactor to a Nuclear Air-Brayton Combined Cycle (NACC) with Firebrick Resistance-Heated Energy Storage (FIRES). Such a reactor could not have existed 15 years ago. It is made possible by advances in natural gas combined cycle plants and high-temperature nuclear fuels (long pdf).  Dr. Forsberg led an Integrated Research Project with U.S. Department of Energy support over three years to develop the concept and a pathway to commercial deployment. The project included MIT, the University of California at Berkeley (UCB) and the University of Wisconsin at Madison (UW) with assistance from Westinghouse. This project was completed in December 2014 and a new 3-year FHR project was initiated with MIT, UCB, UW and the addition of the University of New Mexico. Four major project reports have been released.

Nuclear fuel cycles, including disposal of wastes, are central to nuclear power. Dr. Forsberg was the executive director of MIT Future of the Nuclear Fuel Cycle study that issued its report in 2011. A series of critical questions were identified that are the basis of future research. One top-level question is how the fuel cycle should be organized (pdf)—including whether backend fuel cycle facilities should be collocated at the repository to improve economics, repository performance, nonproliferation characteristics, and public acceptance. This question leads to a broad set of research questions that define our research interests.

The Concentrated Solar Power on Demand system (CSPond) (pdf) is a new type of high-efficiency solar power system with near-term operating temperatures of ~500°C and ultimately operating temperatures between 700 and 950°C. The high-temperature salt technology and power systems are similar or identical to those required for fluoride salt-cooled high-temperature reactors. This is a joint project between NSE and the Mechanical Engineering Department. It is part of a broader effort to develop high-temperature salt-cooled power systems that includes the FHR and CSPond. There is a strong common technical foundation across these different power systems. A small prototype is being designed as part of a joint program between MIT and the Masdar Institute, Abu Dhabi, UAE. Initial hot salt is expected sometime in 2015.