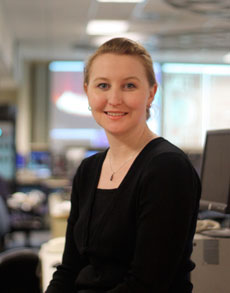 Assistant Professor Anne White has been awarded a grant through the U.S. Department of Energy (DOE) Office of Science Early Career Research Program. She is one of 65 outstanding young scientists around the country selected for this award, and is one amongst four winners at MIT. The five-year awards are designed to bolster the nation's scientific workforce by providing support to exceptional researchers during the crucial early career years, when many scientists do their most formative work. The research awards also aim at providing incentives for scientists to focus on mission research areas that are a high priority for the Department of Energy and the Nation.

Professor White's project is entitled Electron Temperature Fluctuation Measurements and Transport Model Validation at Alcator C-Mod. The objective of this project is to merge experiment and theory by using advanced turbulence simulations to aid in the design of a new turbulence diagnostic system that will be used to test the fundamental physics of turbulent transport in tokamak plasmas. The research project will develop a novel correlation electron cyclotron emission (CECE) diagnostic system for measuring turbulence in the core plasma of the Alcator C-Mod tokamak at MIT.