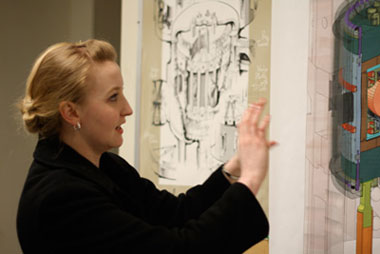 Anne White: Solving mysteries in the pursuit of fusion power

"Nuclear fusion is perhaps the most tantalizing energy technology in development today, with the potential to completely redefine the world's energy supply system. As part of NSE's broad effort to make fusion power a reality, Assistant Professor Anne White is building new understanding of the still-mysterious conditions inside tokamaks, the experimental test beds where fusion reactions occur at temperatures exceeding 100 million degrees.

Anne White's primary workbench is NSE's Alcator C-Mod, one of three tokamak user facilities in the US and a hub of collaboration for national laboratories and international researchers as well as Institute faculty and students.Work is largely focused on the grand challenge of fusion: the need to contain an ongoing fusion reaction and capture its massive heat output forelectric power generation. Success would open the door to a large-scale source of continuous power with no carbon emissions or hazardous waste problems, and fuel that could largely be extracted from ordinary seawater.

"Getting atoms to fuse is challenging — atomic nuclei carry positive charges and naturally repel one another," explains White. But at extremely high temperatures, the nuclei have enough energy that when they collide, they sometimes overcome the repulsion and fuse. The most promising candidates for power production are hydrogen isotopes deuterium and tritium — heated sufficiently, they ionize into a plasma, or charged gas; when they fuse, they create a helium isotope and a neutron, while releasing nuclear energy.

No physical container can handle the temperatures involved, so tokamakscreate a "magnetic bottle" inside a doughnut-shaped chamber, using magnetic fields 100,000 times greater than the earth's natural magnetism, saysWhite. "The magnetic field contains the plasma by forcingthe electrons and nuclei to follow spiral paths around the field lines."

The goal (which thus far has eluded all researchers) is creation of a stable "burning plasma" thatcan maintain its own temperature, thus allowing the reaction to become a net producer of energy.

For over five decades, the difficulty of producing burning plasmas has driven fusion researchers to develop successively more complex and detailed theories of tokamak plasma behavior. "In the last decade, better computer simulations and diagnostic systems have helped identify plasma micro-turbulence asa primary factor in heat loss in the plasma. But there aremanyunsolved questions," says White. "Our understanding of the physics of confinement is still incomplete. We need better predictions of heat and particle transport, and diagnostic systems that can directly measure turbulence."

Building this understanding is White's research focus. She and her team use advanced simulations to make predictions about turbulence parameters, and then compare those with experimental results to make better predictions of plasma confinement and performance. Her work was recently recognized with a Department of Energy Early Career Research Award, a five-year grant that will support the development of new plasma turbulence diagnostics.

White notes that the work at Alcator C-Mod "is a dance between experimentation and fundamental theory, with an exciting connection to engineering. Plasma temperatures can be 10 or 20 times hotter than the sun's core, just three feet away fromthe chamber wall. The engineering challenge is huge."

Another large part of White's work is recruiting and advising graduate and undergraduate students to work at Alactor C-Mod. "To a large extent, students run the tokamak," she explains. "They design and lead experiments, construct diagnostics, write simulations, develop models, and find new equations to describe the tokamak plasma. Graduate student involvement is the backbone of the program."

They are part of a global development effort that will culminate in a major milestone for fusion, and for science as a whole – the ITER tokamak, currently under construction in France. The 10 billion euro project, slated for completion in 2019, will enable much larger scale experimentation; it is designed to deliver 500 megawatts of output from 50 megawatts of input power for several minutes at a time, from a self-sustaining plasma. "If ITER works as designed and predicted, we could build a demonstration power plant about that size," says White.

The possibility of making such a huge contribution to society's infrastructure is appealing to White, who learned about fusion power during high school by reading science-fiction literatureabout interplanetary travel. "Our research is very practical; we want to build power plants. But there's also a lot of really beautiful physics involved. When I learned as an undergraduate that I could actually work on tokamaks, I said, 'that's all I want to do!'"

“The work at Alcator C-Mod is a dance between experimentation and fundamental theory, with an exciting connection to engineering. Plasma temperatures can be 10 or 20 times hotter than the sun's core, just three feet away fromthe chamber wall. The engineering challenge is huge.”