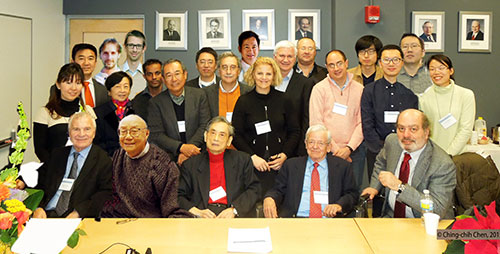 On November 29, 2015 a workshop was held at MIT to honor the career and achievements of Sow-Hsin Chen, Emeritus Professor of Nuclear Science and Engineering, and celebrate his 80th birthday. The one-day workshop on “Topics in Soft Condensed Matter” featured talks by ten speakers from around the world and brought together his former collaborators, students, and other researchers in the field.

“It is a great honor to have studied with Prof. Chen as an MIT student many years ago. We are very excited to celebrate his 80 birthday with this workshop. The breadth and depth of his scientific contribution to the neutron scattering field and soft condensed matter physics is tremendous and far reaching,” said Yun Liu, a former graduate student, currently a professor at the University of Delaware.

Professor Sow-Hsin Chen is a pioneer in using neutron scattering to study a wide range of scientific problems such as microemulsion, cement, proteins, surfactants, hydrogen storage materials, and water. Especially, he is internationally well known for his contributions to understand the dynamic properties of supercooled and interfacial water with the use of neutron scattering techniques. His life-long achievements have been recognized by the international communities too as seen by many prestigious awards he won. In particular, he won 2008 Clifford G. Shull Prize for his seminal contributions to understanding the dynamical properties of supercooled and interfacial water, and 2015 Guinier Prize for his scientific contributions to soft condensed matter physics. Also as an educator, he has been recognized for his training of young scientists in the use of those same techniques.

Professor Chen received his BS in physics from National Taiwan University (1956), and his MS in physics from National Tsing Hua University (1958). He arrived in U.S. under an International Atomic Energy Agency Fellowship, and completed an MS in nuclear science at the University of Michigan (1962), and his Ph.D. in physics at McMaster University, Canada, (1964) under the Nobel Laureate, Prof. Bertram N. Brockhouse. He joined the faculty of the Department of Nuclear Engineering at MIT in 1968. Professor Chen continues to be a valuable contributor and influencer in the field and the Department.