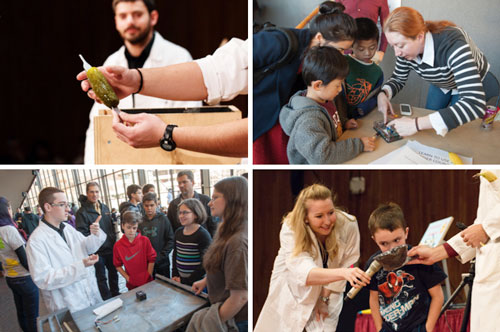 Have you ever wondered what radiation actually is or where you can find it? It turns out that radiation is all around us and its unique properties make it useful for curing diseases, producing energy, and probing the properties of matter.

On Dec. 5, the Nuclear Science and Engineering (NSE) community led a “Science on Saturday” (SoS) outreach event at Kresge Auditorium for an audience of over 300 K-12 students to inspire the next generation of nuclear scientists and engineers. The SoS events, sponsored by the MIT Museum and the Akamai Foundation, bring the exciting science being studied across the MIT campus to the Boston community for their education and enjoyment.

The event featured seven on-stage demos by NSE students and researchers that highlighted what radiation is, where we can find it, and how we can harness it for the benefit of humanity.

Jake Hecla, a third year student in NSE, explained the basic principles of radiation with an electrical arc radiation detector. Jake wowed the audience with his demonstration of how alpha particles traveling 15,000 faster than a bullet can be stopped with only a thin piece of paper.

NSE Professor Mike Short identified natural sources of radiation that we interact with each and every day. Professor Short invited members from the audience on stage to use Geiger counters to characterize the activity of a pile of burned banana ash, a concentrated source of naturally radioactive potassium-40.

The Plasma Science and Fusion Center (PSFC) led a series of demos to illustrate how to manipulate radiation. PSFC research scientist Ted Golfinopoulos and second year physics graduate student Alex Tinguely highlighted the relationship between magnetism and electricity, and how the electromagnetic force can be used to manipulate a plasma in a glow discharge tube.

Second year NSE graduate student Adam Kuang awed the audience with his “plasma pickle” demonstration. Adam worked with volunteers from the audience to apply a voltage across a pickle and make it glimmer with a bright yellow-orange glow from the line emission of ionized sodium.

A variety of demos were available for families to interact with following the on-stage presentations. NSE volunteers were on hand to present tabletop experiments including Geiger counters, a cloud chamber, mock fuel assemblies for light and heavy water nuclear reactors, depleted uranium, fiesta dinnerware and more.

Science on Saturday was an effective means to engage the public and share the enthusiasm that NSE students and researchers have for studying radiation and designing technologies to address many of the most challenging issues facing society.