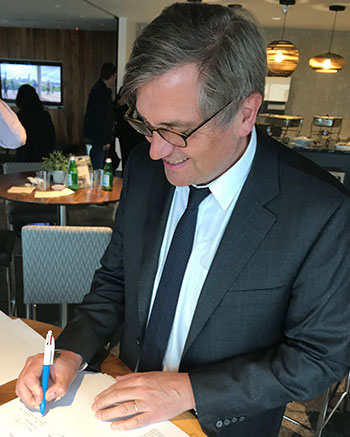 MIT Department of Nuclear Science and Engineering (NSE) Professor Jacopo Buongiorno was awarded a grant from Électricité de France (EDF) in support of the ongoing study on the Future of Nuclear Energy in a Carbon-Constrained World.

Buongiorno, who leads the Center for Advanced Nuclear Energy Systems (CANES), one of eight MITEI Low-Carbon Energy Centers, is working with seven MIT faculty members from across the Institute, as well as two Harvard University faculty and four external consultants in a multidisciplinary effort. The goal of the study is to conduct an objective assessment of the opportunities and challenges affecting the ability of nuclear energy technologies in meeting U.S. and global energy needs in a carbon-constrained world. More information about the study can be found a here.

EDF is the world’s largest nuclear electric utility, a member of the MIT Energy Initiative, and a long-term sponsor of nuclear research at MIT.