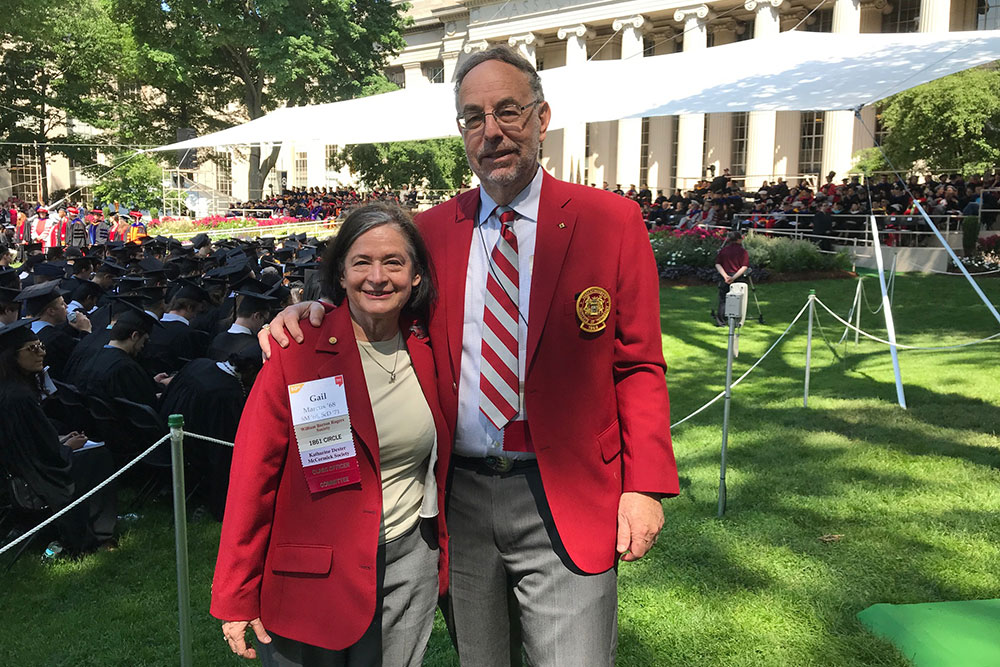 After receiving her ScD from MIT, Dr. Marcus moved to Washington, D.C., where she worked as a systems analyst and nuclear specialist for a not-for-profit organization called Analytic Services (ANSER). She conducted analyses on proposed Air Force systems at ANSER for eight years before moving to the Congressional Research Service (CRS), where she worked as the Assistant Chief of the Science Policy Research Division. At CRS, she was responsible for work for Congress on a broad range of science and technology issues, and was involved in the analysis of proposed congressional legislation concerning nuclear policy and risk assessment. In 1985, Dr. Marcus began working for the U.S. Nuclear Regulatory Commission (NRC), where she held numerous positions, including as technical assistant to one of the agency’s commissioners. She spent half a year in Japan while at the NRC, working with Japan’s Ministry of International Trade and Industry on the Advanced Boiling Water Reactor, and another year as a Visiting Professor at the Tokyo Institute of Technology (1998-1999).

When she returned to the United States, Dr. Marcus worked at the Department of Energy (DOE) as Principal Deputy Director of the Office of Nuclear Energy, Science and Technology. She served as President of the American Nuclear Society (2001-2002) and worked as Deputy Director-General of the OECD Nuclear Energy Agency in Paris (2004-2007). Dr. Marcus is the author of the book Nuclear Firsts: Milestones on the Road to a Nuclear Power Development, and a principal author of the NRC’s Principles of Good Regulation.

Your career has focused on the integration of technology into society — what to fund, how to regulate, and how to balance different interests. These are not strictly engineering problems. Why is it important for engineers to be involved in this type of work?

It has always seemed to me that the world we live in today is heavily influenced by technology and technological developments. It is technology that provides our power, our transportation, our communications. Science and technology has also vastly changed how our food is grown and how our injuries and illnesses are treated. Technology has changed the world for the better in many ways, but technology has also brought new risks. When people don’t fully understand these risks, poor decisions can be made. We can shy away from using a new technology—like nuclear power or GMOs—simply because people don’t understand it, or we can end up introducing a new technology without adequately anticipating the potential problems, resulting in unnecessary injuries or deaths. And most technologies are complex and multi-faceted. Decisions that are made with one objective in mind sometimes have unintended consequences on other things.

Since the problems are complex, the solutions need to be addressed on many levels. It is important that the decision makers have a thorough understanding of the systems, and it is important that they be able to analyze a broad range of possible interactions.  A lot of people need to have a role in this, and the mix of people should include people with the ability to understand the technology and communicate that understanding to decision makers and the public, to perform quantitative assessments of alternatives, and to be able to project what impacts the technology can have as it grows in use, as it displaces older technologies, and as it begins to have effects on different sectors of the economy and society.

Why is this important in the energy field?

This is very apparent in the energy field, where there are a variety of options for generating electricity, and the determination of what options make sense is extraordinarily complex. You have to take into account land use, water requirements, impacts on wildlife, mining impacts, air and water pollution, transmission requirements, reliability, national security implications, backup resource requirements, long-term fuel resources, long-term supplies of other materials required to build and operate different kinds of power plants, and more. These require a technical understanding of each of these areas, and an ability to analyze all the components and how to integrate all the possible options for the best overall outcome.

Among your many contributions at the NRC, you played a major role in developing the Principles of Good Regulation, a single-page statement of the agency’s values. Why was this important and what was the impact?

At the time I worked on them, the Principles of Good Regulation seemed like a statement of the obvious. They stated that NRC needed to be independent, open, efficient, clear, and reliable in doing its work. Perhaps because it seemed so obvious, people really didn’t think through how individual activities did or did not meet these objectives. Perhaps the first one we thought about was independence. The U.S. Nuclear Regulatory Commission is, by definition, an “independent agency.”  But some members of the NRC staff were so intent on showing they were independent that they tended not to want to communicate with some of our stakeholders. As a consequence, they insulated themselves from hearing from all sides about matters before them.  The Principles of Good Regulation added the fairly simple, but profoundly important, qualification that independence does not mean isolation. Rather, it means getting the views of all affected parties, conducting independent reviews of the issues, and making decisions based on all the facts.

In addition, everyone understood that safety was paramount, but sometimes, there was a tendency to keep piling one requirement on top of another, without sufficiently considering whether additional requirements added much in terms of safety, or even, in fact, whether requirements could end up being in conflict with each other. And of constantly making incremental changes to requirements. Or, of taking forever to make final decisions. The Principles of Good Regulation made it clear that regulatory activities should be consistent with the degree of risk reduction they achieve; that, where several effective options are possible, the agency should opt for the alternative that minimizes the use of resources; the decisions should be made without undue delay; and that regulation should be reliable, and not unjustifiably in a state of continuous transition.

Obviously, all these are aspirational goals for the agency, and I know there are times when some stakeholders think that NRC’s regulations are overly restrictive, decisions take too long, etc. At the same time, though, other stakeholders feel NRC isn’t stringent enough. On balance, though, I think the visibility the NRC has given to the Principles of Good Regulation in the 25 years or so since they were implemented had made the NRC staff much more conscious of these factors, and enabled them to strive to meet the goals articulated in the Principles.

Have other organizations followed the NRC’s lead?

Yes. I have been gratified to see that other organizations have begun to adopt similar sets of principles. They are a little different in each organization, and they are called by slightly different names, but what is interesting is that, not only are regulatory organizations adopting such principles, but some corporations have adopted variants as well. While they don’t allude to regulation, the principles of making timely, risk-appropriate decisions applies to all organizations working with complex technologies.

You served in senior management positions at the U.S. Nuclear Regulatory Commission, the U.S. Department of Energy, and the Organization for Economic Cooperation and Development’s Nuclear Energy Agency in Paris. All the while, you remained an active MIT alumna. How has staying involved with MIT impacted your life?

Since graduating, I have been involved with MIT in a number of ways, but the two longest-term involvements were as class secretary, along with my husband, and on the board of the MIT Club of Washington. I have found both to be very rewarding.  As class secretaries, we have enjoyed keeping in touch with a number of our classmates, and it is rewarding to be considered to be some of the “glue” that keeps our class in touch with each other. The MIT Club of Washington activity started simply because the Club has an interesting program and both my husband and I felt we could contribute to it. By participating, we have found ourselves engaged with a community of like-minded individuals in Washington from a variety of technical fields.  This has given us exposure to technical fields outside of our own, and to individuals in a variety of government and non-government positions in the Washington area. In my case, one individual I met through MIT Club activities even ended up pointing me toward a job opportunity in an organization I might not even have known about if I hadn’t been talking to him at meetings.

We have also found the MIT Club network to be valuable during our sojourns in Tokyo and Paris. Particularly in Tokyo, we were able to connect with the MIT community and even became involved enough in the Tokyo MIT club to contribute to a couple of events.