With his computational breakthrough, nuclear engineer Mark Reed characterizes the weird warping of geometries inside a reactor core 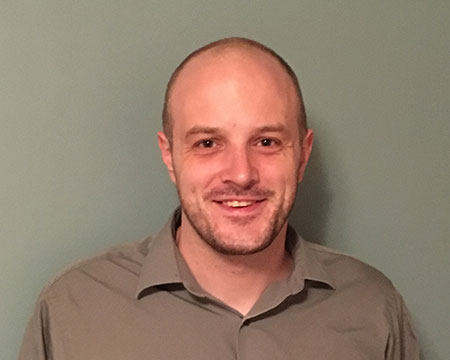 As a graduate student in Nuclear Science and Engineering (NSE), Mark Reed ’10, ’11, SM ’11, PhD ’14 spent years struggling to solve one of the most resistant problems in the field: how to characterize and predict the fission reaction response to physical distortions that take place inside nuclear reactors in response to pressure, heat and irradiation.  But finally, says Reed, “I had an unusual out-of-the box idea, and it worked.”

Reed’s insight—an unconventional but pragmatic approach for modeling reactor distortions— has already begun to make waves in the field. Nuclear energy innovators are deploying his computational technique in the design of next generation breed-and-burn sodium fast reactors. And Reed is publishing two articles in the February 2018 issue of the Annals of Nuclear Energy, co-authored by Kord Smith, Korea Electric Power Company (KEPCO) Professor of the Practice of Nuclear Science and Engineering, and associate professor of nuclear science and engineering Benoit Forget.

The problem of core distortions has long challenged nuclear engineers and posed major issues for the nuclear industry. Parts manufactured to sustain and contain nuclear reactions such as fuel assemblies and ducts warp and bow when exposed to different conditions, such as shimmying and jostling during seismic events; irradiation-induced swelling of fuel throughout a core lifetime; and thermal swelling of fuel due to temperature or pressure changes. Nuclear plant designers and operators must somehow account for these distortions if a plant is to operate safely and efficiently.

But previous attempts at describing the evolution and behavior of distortions often failed, explains Reed, “because it is hard to model things that are peculiar shapes instead of simple squares, circles, triangles, hexagons, or anything else defined by equations that you can write down.” Under stress, the exact geometries of reactor parts bend and twist, and exact models are often too complex to be constructed—even using very fine computational meshes.

Conventional methods for mapping these deformations offered at best approximations of the strange shape-shifting that is going on.  And without the ability to predict such physical changes, the very integrity of a reactor may be at issue. “Understanding these mechanical distortions is important for designing other things in the reactor, such as what kind of mechanical restraint to put around the reactor core,” says Reed.

“Every thesis is part creativity (inspiration) and part implementation (perspiration). I was very lucky because once I had the idea for the virtual density concept idea and proved that it worked, everything fell into place.”


Reed addresses the problem of uncertain and rapidly altering geometries in a radically innovative way. Applying what he calls the “virtual density” theory of neutronics, Reed converts these geometric perturbations into equivalent material density perturbations, which, he says, “are more accurate and much simpler to evaluate.” Through Reed’s computational breakthrough, it is possible to describe and predict the asymmetric swelling and warping of structures under a range of conditions.

So promising is Reed’s method that TerraPower, a prominent nuclear reactor design company, funded his doctoral research and engaged him to help kickstart its efforts to develop a new sodium fast reactor (SFR). When confronted with certain kinds of temperature changes, an SFR reactor may experience core expansion and accompanying distortion of structural elements and fuel assemblies. “When the core heats up, it can go in a bad direction,” says Reed. “Before my research, it was hard to translate that mechanical behavior into neutron physics and cumbersome to model, but now it’s much easier.”

Reed’s powerful new tool is helping to inch the nuclear industry forward, by providing designers of new reactors with validation of their ideas, and by helping current reactor operators understand the impact of extreme events or new materials on the function of their nuclear plants. Two months after he defended his thesis, TerraPower applied his virtual density research to its SFR design work. “The project turned out much better than I expected, which was surprising and humbling,” says Reed.  “I’ve contributed one small piece to the large puzzle of advanced reactor design.”

Reed was drawn to the field as a freshman at MIT, where he double-majored in physics and nuclear science and engineering. “I found nuclear fission reactor design a super interesting and difficult problem,” he says. “Making clean energy to raise the standard of living of people around the world without destroying the environment is also a good thing.”

Today, Reed, who already has one patent to his name, continues to tease out new applications from his research. He has more work in progress to deploy virtual density theory to reactors as they undergo the stress of seismic activity, among other phenomena. “I have some things in my head that I really want to get out there,” he says. “It’s an itch that needs to be scratched.”