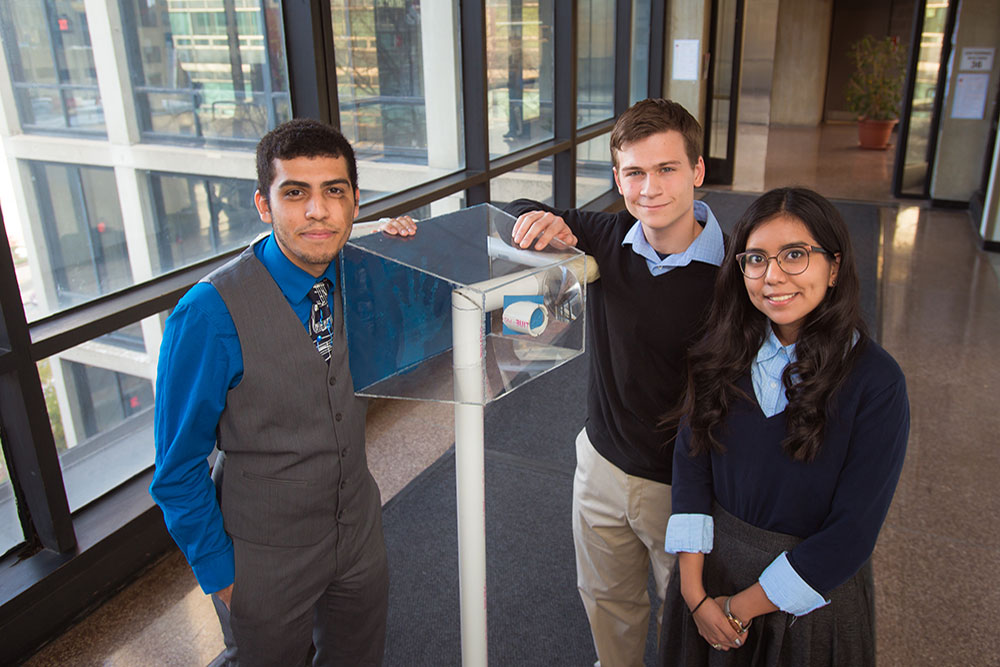 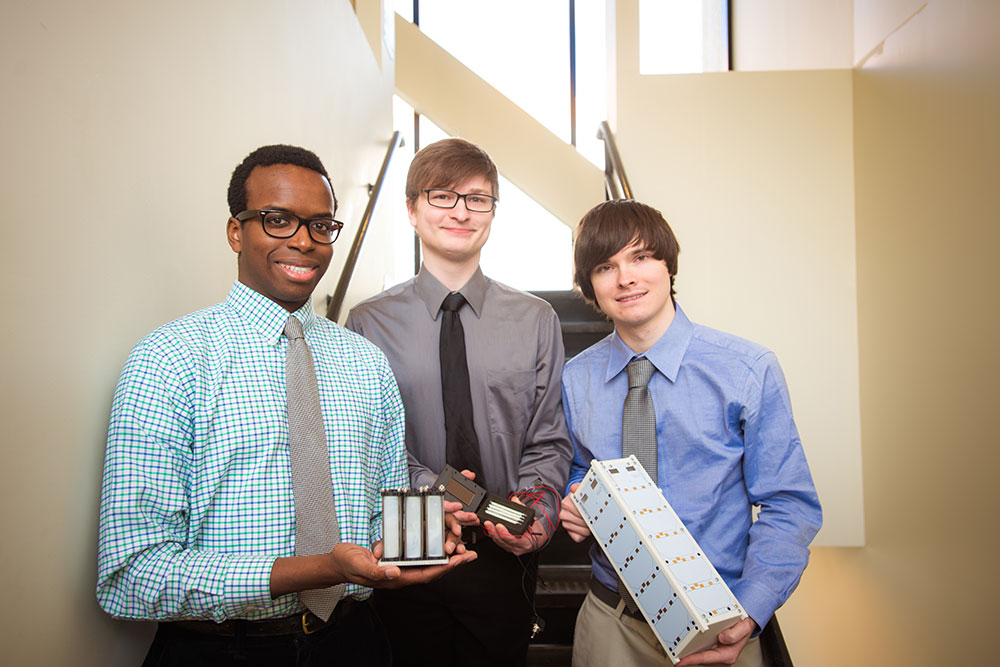 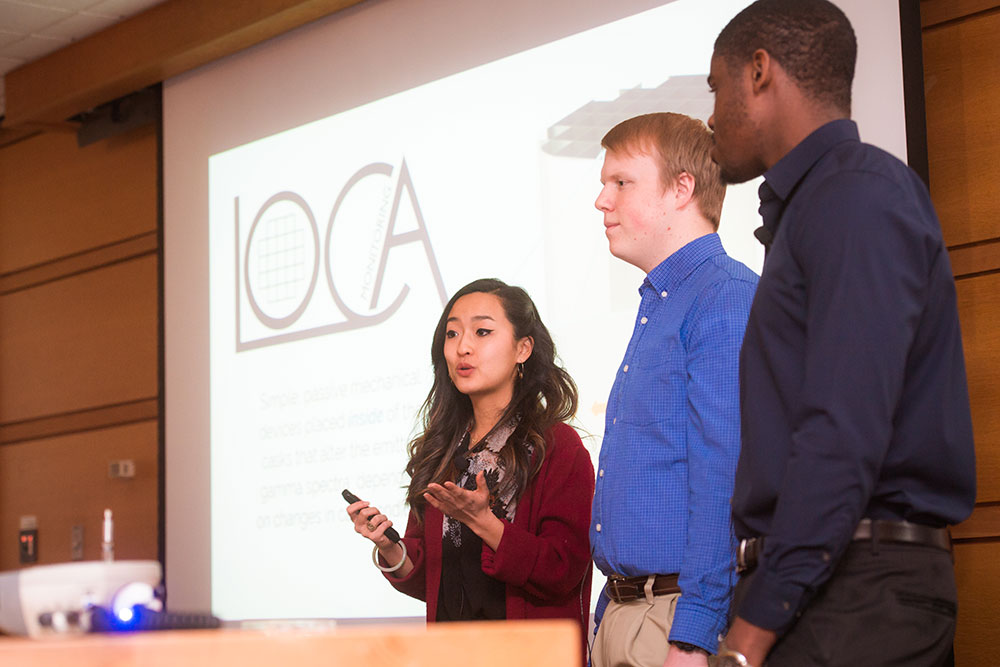 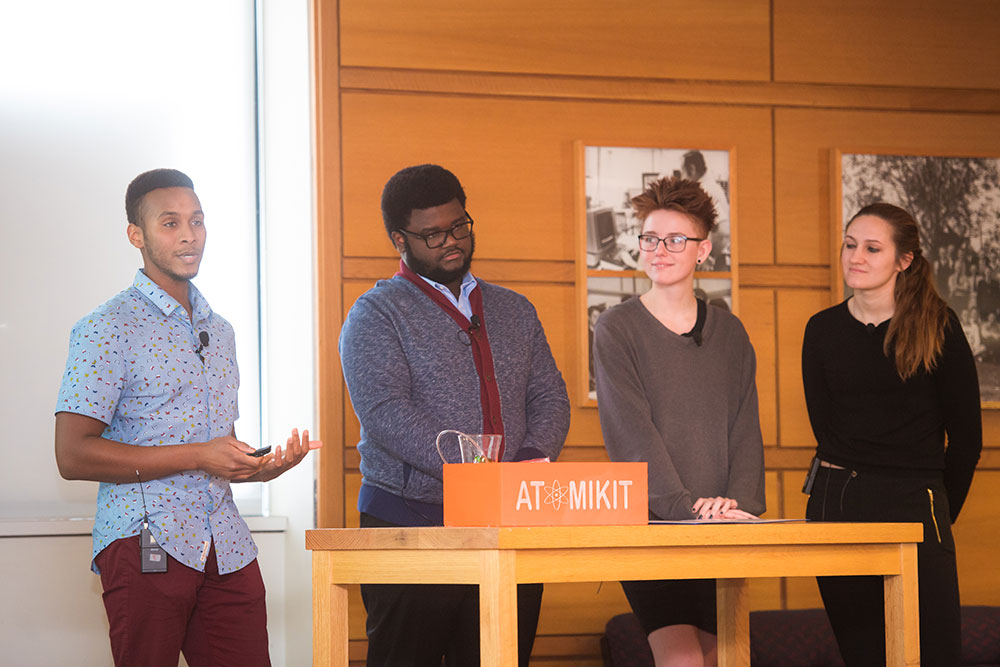 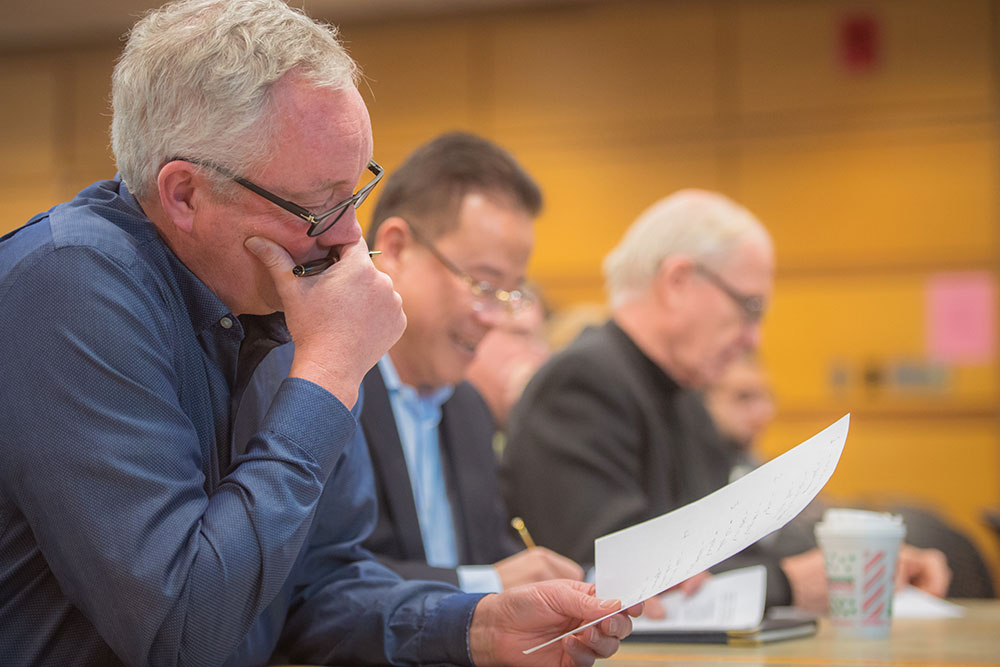 On December 13, 2017 four teams presented their semester-long design projects to the audience and a panel of judges in a design competition. The topics demonstrated the broad application of nuclear science and engineering in finding solutions to real world problems. PRISM, won the competition with their low-cost solution and design fordiagnostic x-ray imaging.

Medical x-ray imaging is largely only available in developing countries across the world. X-ray imaging is used to see what is occurring internally in the body and is necessary for diagnosing and treating many diseases. A significant use case of x-ray imaging is tuberculosis (TB), a disease 95% of which occurs in developing countries. Thus, the people who need x-ray imaging the most are without access to those same x-ray imaging. We designed a new x-ray imaging device, prism, which reduces the cost of x-ray imaging equipment by a factor of 10-100 with only a slight increase in radiation dosage and decrease in resolution. This design reduces the barrier of cost for getting an x-ray image and allows for equipment to be locally sourced. In the experimental setting the design of prism can image TB models, indicating that in a patient it would be able to perform similarly. The imaging results of the experimental prism design are promising in that the TB is clearly visible. Prism has the potentiality to be able to greatly enhance healthcare in the developing world and impact the lives of many by allowing physicians to do better work.

Supplies of Plutonium-238, the isotope that NASA has used to fuel the radioisotope thermoelectric generators (RTGs) that powered deep space mis- sions for decades, are running dangerously low. An alternative technology exists called the Radioisotope Luminescent Generator (RLG), which con- verts the energy from radioactive decay into light and then into electricity. An RLG design has been studied that is fueled by supercritical Tritium and uses photo-voltaic energy conversion. These properties make the RLG safer, more efficient, more scalable, and more accessible than competing technolo- gies. Using existing methods and materials, this RLG design is expected to have a mass of one kilogram and produce 1.6 watts of electrical power when new, making it lighter than any deployable RTG ever constructed and more powerful than any existing beta-voltaic technology. This article will docu- ment the trade studies which helped refine the design of the RLG as well as describe the expected device performance and identify avenues of additional research needed to implement the RLG.

Currently in the US, the only long-term method of spent fuel disposal is storage in spent dry fuel casks. However, once loaded, these casks are provided no active internal monitoring to verify that the loaded fuel remains innocuous over time. Therefore, the Low-Cost Onsite Cask Attenuation (LOCA) Monitoring System was developed to provide direct and continuous measurement of dry cask internal conditions, such as temperature and pressure. The system consists of simple, mechanical monitors located within the cask that variably attenuate the gamma spectrum emitted from the spent fuel depending on cask internal conditions. Comparisons between this altered gamma flux and an unaltered flux allows for information about internal cask conditions to be extrapolated. Direct, empirical, active monitoring of dry spent fuel casks as provided by the LOCA Monitoring System can be used to validate if the current modes of spent fuel disposal are viable and safe.

ATOMIKIT: A novel approach to teaching high school students about nuclear energy using a combination of both digital and physical mediums

With rising concerns of carbon emissions, many experts have supported the expansion of nuclear energy to mitigate climate change. Although nuclear energy is the largest supplier of low-carbon energy in the United States, its share of national energy production has stagnated at 20% since 1990, and public opinion still remains lukewarm on industry expansion. A recent report has linked favorability toward nuclear energy with respondents’ self-perceived level of knowledge about it. Given that 37% of Americans do not feel well-informed about nuclear energy, there is a clear opportunity to boost public support through education. Atomikit was developed a tool to educate students about nuclear physics and its applications through interactive physical and web components. Results indicate that Atomikit is effective in increasing students’ knowledge of and favorability toward nuclear energy.