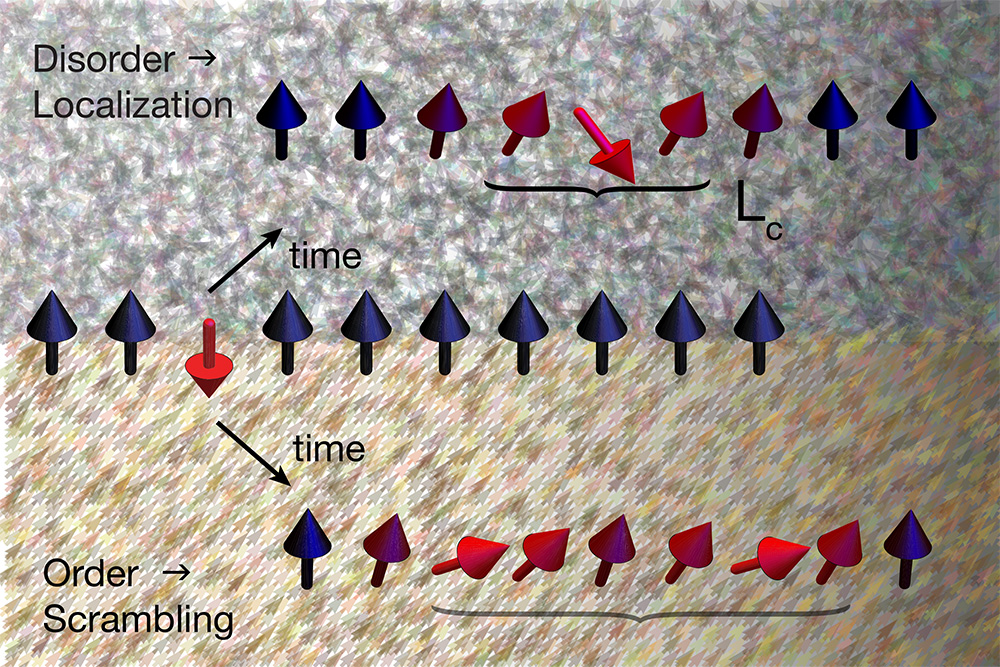 Quantum many-body correlations in a spin chain grow from an initial localized state in the absence of disorder, but are restricted to a finite size by disorder, as measured by the average correlation length. 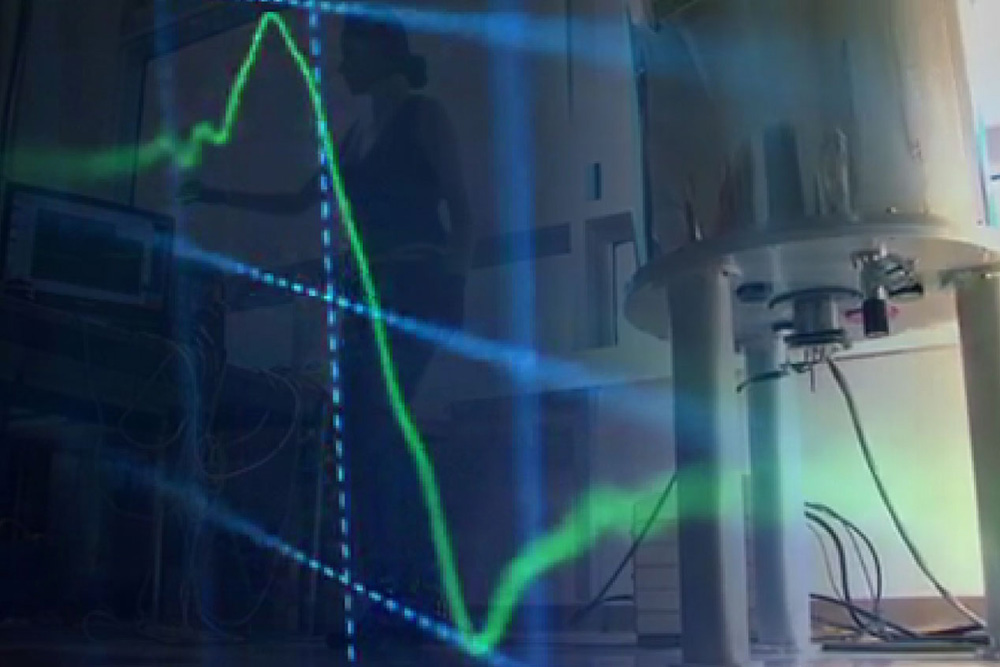 The NMR spectrometer in the QEG lab.

When we talk about “information technology,” we generally mean the technology part, like computers, networks, and software. But information itself, and its behavior in quantum systems, is a central focus for MIT’s interdisciplinary Quantum Engineering Group (QEG) as it seeks to develop quantum computing and other applications of quantum technology.

A QEG team has provided unprecedented visibility into the spread of information in large quantum mechanical systems, via a novel measurement methodology and metric described in a new Physics Review Letters article. The team was able to measure, for the first time, the spread of correlations among quantum spins in fluorapatite (FAP) crystal, using an adaptation of room-temperature solid-state nuclear magnetic resonance (NMR) techniques.

Researchers increasingly believe that a clearer understanding of information spreading is not only essential to understanding the workings of the quantum realm, where classical laws of physics often do not apply, but could also help engineer the internal “wiring” of quantum computers, sensors, and other devices.

One key quantum phenomenon is non-classical correlation, or entanglement, in which pairs or groups of particles interact such that their physical properties cannot be described independently, even when the particles are widely separated.

This relationship is central to a rapidly advancing field in physics, quantum information theory. It posits a new thermodynamic perspective in which information and energy are linked — in other words, that information is physical, and that quantum-level sharing of information underlies the universal tendency towards entropy and thermal equilibrium, known in quantum systems as thermalization.

Cappellaro explains that a primary aim of the research was measuring the quantum-level struggle between two states of matter: thermalization and localization, a state in which information transfer is restricted and the tendency towards higher entropy is somehow resisted through disorder. The QEG team’s work centered on the complex problem of many-body localization (MBL) where the role of spin-spin interactions is critical.

The ability to gather this data experimentally in a lab is a breakthrough, in part because simulation of quantum systems and localization-thermalization transitions is extremely difficult even for today’s most powerful computers. “The size of the problem becomes intractable very quickly, when you have interactions,” says Cappellaro. “You can simulate perhaps 12 spins using brute force but that’s about it — far fewer than the experimental system is capable of exploring.”

NMR techniques can reveal the existence of correlations among spins, as correlated spins rotate faster under applied magnetic fields than isolated spins. However, traditional NMR experiments can only extract partial information about correlations. The QEG researchers combined those techniques with their knowledge of the spin dynamics in their crystal, whose geometry approximately confines the evolution to linear spin chains.

In addition to being able to distinguish between different types of localization (such as MBL and the simpler Anderson Localization), the method also represents a possible advance towards the ability to control of these systems through the introduction of disorder, which promotes localization, adds Cappellaro. Because MBL preserves information and prevents it from becoming scrambled, it has potential for memory applications.

Former MIT post-doc Iman Marvian, who is now an assistant professor in Duke University’s departments of Physics and Electrical and Computer Engineering, says the research’s focus “addresses a very fundamental question about the foundation of thermodynamics, the question of why systems thermalize and even why the notion of temperature exists at all. Over the last 10 years or so there’s been mounting evidence, from analytical arguments to numerical simulations, that even though different parts of the system are interacting with each other, in the MBL phase systems don’t thermalize. And it is very exciting that we can now observe this in an actual experiment.

“People have proposed different ways to detect this phase of matter, but they’re difficult to measure in a lab,” explains Marvian. “Paola’s group studied it from a new point of view and introduced quantities that can be measured. I’m really impressed at how they’ve been able to extract useful information about MBL from these NMR experiments. It’s great progress, because it makes it possible to experiment with MBL on a natural crystal.”

The research was able to leverage NMR-related capabilities developed under a previous grant from the US Air Force, says Cappellaro, and some additional funding from the National Science Foundation. Prospects for this research area are promising, she adds. “For a long time, most many-body quantum research was focused on equilibrium properties. Now, because we can do many more experiments and would like to engineer quantum systems, there’s much more interest in dynamics, and new programs devoted to this general area. So hopefully we can get more funding and continue the work.”