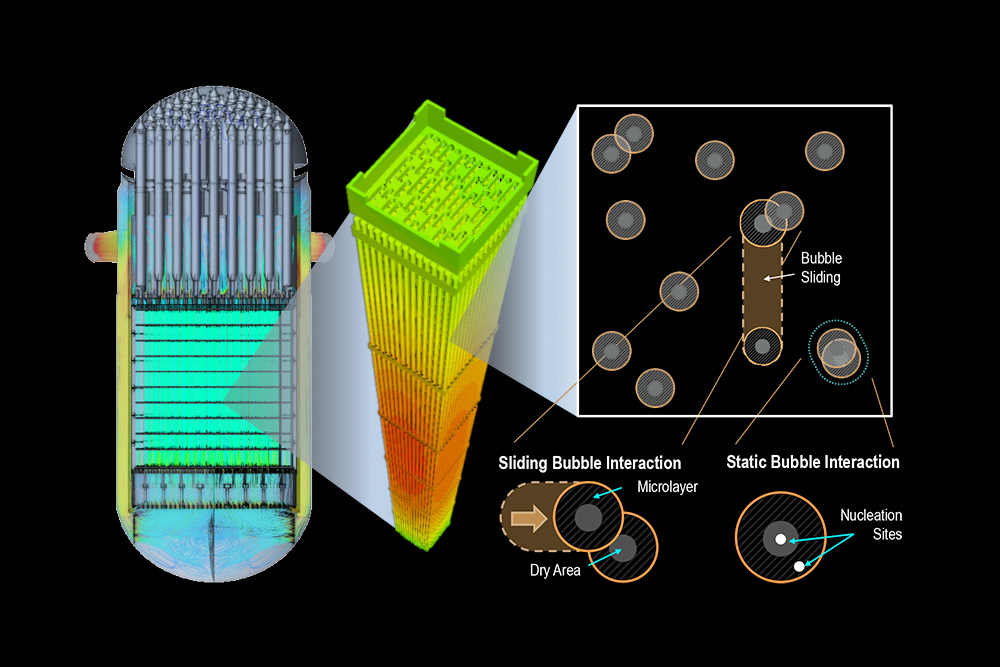 Engineers must manage a maelstrom in the core of operating nuclear reactors. Nuclear reactions deposit an extraordinary amount of heat in the fuel rods, setting off a frenzy of boiling, bubbling, and evaporation in surrounding fluid. From this churning flow, operators harness the removal of heat.

In search of greater efficiencies in nuclear systems, scientists have long sought to characterize and predict the physics underlying these processes of heat transfer—with only modest success.

But now, a research team led by Emilio Baglietto, associate professor of nuclear science and engineering, has made a significant breakthrough in detailing these physical phenomena. Their approach utilizes a modeling technology called computational fluid dynamics (CFD). Baglietto has developed new CFD tools that capture the fundamental physics of boiling, making it possible to track rapidly evolving heat transfer phenomena at the microscale in a range of different reactors, and for different operating conditions.

“Our research opens up the prospect of advancing the efficiency of current nuclear power systems and designing better fuel for future reactor systems,” says Baglietto.

Baglietto, who arrived at MIT in 2011, is thermal hydraulics lead for the Consortium for Advanced Simulation of Lightwater Reactors (CASL), an initiative begun in 2010 to design predictive modeling tools to improve current and next generation reactors, and to ensure the economic viability of nuclear energy as an electricity source.

Central to Baglietto’s CASL work has been the issue of critical heat flux (CHF), which “represents one of the grand challenges for the heat transfer community,” he says. CHF describes a condition of boiling where there is a sudden loss of contact between the bubbling liquid, and the heating element, which in the case of the nuclear industry is the nuclear fuel rod. This instability can emerge suddenly, in response for example to changes in power levels. As boiling reaches a crisis, a vaporous film covers the fuel surface, which then gives way to dry spots that quickly reach very high temperatures.

“You want bubbles forming and departing from the surface, and water evaporating, in order to take away heat,” explains Baglietto. “If it becomes impossible to remove the heat, it is possible for the metal cladding to fail.”

Nuclear regulators have established power settings in the commercial reactor fleet whose upper limits are well beneath levels that might trigger CHF. This has meant running reactors below their potential energy output.

“We want to allow as much boiling as possible without reaching CHF,”; says Baglietto. “If we could know how far we are at all times from CHF, we could operate just on the other side, and improve the performance of reactors.”

Achieving this, says Baglietto, requires better modeling of the processes leading to CHF. “Previous models were based on clever guesses, because it was impossible to see what was actually going on at the surface where boiling took place, and because models didn’t take into account all the physics driving CHF,” says Baglietto.

So he set out to create a comprehensive, high fidelity representation of boiling heat transfer processes up to the point of CHF. This meant creating physically accurate models of the movement of bubbles, boiling and condensation taking place at the “wall” — here defined as the cladding of four meter-tall, one centimeter-wide nuclear fuel rods, packed in the tens of thousands in a typical nuclear reactor core, and surrounded by hot fluid.

Using electrically simulated heaters with surrogate fuel assemblies and transparent walls, MIT researchers were able to observe the fine details in the evolution of boiling to CHF.

“You’d go from a situation where nice little bubbles removed a lot of heat, and new water re-flooded the surface, keeping things cold, to an instant later when suddenly there was no more space for bubbles and dry spots would form and grow,” says Baglietto.

One fundamental corroboration emerged from these experiments. Baglietto’s initial models, contrary to conventional thinking, had suggested that during boiling, evaporation is not the exclusive form of heat removal. Simulation data showed that bubbles sliding, jostling and departing from the surface removed even more heat than evaporation, and experiments validated the findings of the models.

A landmark of modeling

“Baglietto’s work represents a landmark in the evolution of predictive capabilities for boiling systems, enabling us to model behaviors at a much more fundamental level than ever possible before,” says W. David Pointer, Group Leader of Advanced Reactor Engineering at the Oak Ridge National Laboratory, who was not involved in the research.

“;His research will allow us to develop significantly more aggressive designs that better optimize the power produced by fuel without compromising on safety, and it will have an immediate impact on performance in the current fleet as well as on next-generation reactor design.”

Baglietto’s research will also quickly improve the process for developing nuclear fuels. Instead of spending many months and millions of dollars on experiments, says Pointer, “We can shortcut those long sequences of tests by providing accurate, reliable models.”

Even small improvements in nuclear energy output can make a big difference, notes Baglietto. “If fuel performs five percent better in an existing reactor, that means five percent more energy output, which can mean burning less gas and coal,” he says. “I hope to see our work very soon in US reactors, because if we can produce more nuclear energy cheaply, reactors will remain competitive against other fuels, and make a greater impact on CO2 emissions."

The research was supported by the Department of Energy’s Consortium for Advanced Simulation of Light Water Reactors.