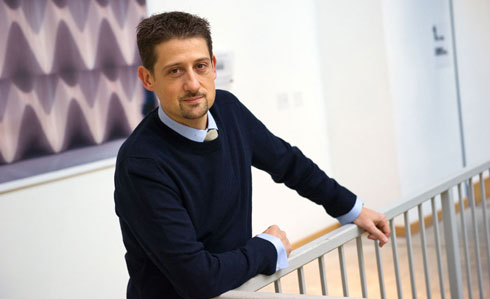 Nuclear fission technology is the only viable grid-scale source of continuous, carbon-free electricity available today – but realizing its potential in the fight against global climate change requires substantial improvements in both the technological and the economic performance of new-generation reactors. Over the last 15 years, computational techniques for modeling reactor behavior on both macro and micro scales have emerged as central tools in this effort, and NSE students will have the opportunity to learn about them from a growing faculty group that includes new Assistant Professor Emilio Baglietto, a pioneer in the development of computational fluid dynamics (CFD) technology for the nuclear industry.

Baglietto comes to NSE from the engineering simulation software company CD-adapco, where he was Director of Nuclear Applications. He joins a rapidly growing group of NSE faculty working in the field of advanced computation and simulation, including Professors Kord Smith and Benoit Forget, whose research focuses on the development of computational models and simulation tools for reactor analysis, and Professors Ju Li, Bilge Yildiz, and Sidney Yip, whose fundamental computational studies of materials behavior are shedding light on the performance of materials in the extreme environments of fission and fusion reactors.

Baglietto’s research goals include improving the effectiveness and expanding the reach of 3-D, first-principles computational tools for nuclear reactor design. He notes that this work is applicable at the micro scale, to better understand physical interactions; at the component scale, to optimize designs; and at the full-system level, to validate new designs while taking into account complex system interactions. As a result, the technology promises to be a starting point for entirely new generations of innovation in a wide range of areas.

Baglietto first became intrigued by nuclear technology when he read about fusion reactors during junior high school in his native Italy; he established his niche in computation during his studies at the Tokyo Institute of Technology, where he earned his doctorate in 2004. At the time, however, computing systems for reactor design were underpowered and CFD implementations did not have sufficient resolution, accuracy, and scale to provide useful insights into conditions inside reactors.

In his work at CD-adapco, Baglietto helped improve CFD technology and apply it to reactor core simulations, including simulations of the behavior of the fuel rods found in light-water reactor cores. The resulting insights have led to increased fuel reliability and efficiency through minimization of damage to the rods, thus extending their lifetime and improving reactor availability and safety.

One type of rod damage comes from deposition of oxides, which seep from the reactor’s structural material into the core’s cooling water. These deposits, known as “crud,” impede cooling and can lead to fuel failures that require reactors to be taken out of service. CFD simulations of flow and heat transfer, working in conjunction with chemistry analysis tools, helped identify excessive crud deposition locations, and enabled development of new designs with improved flow and cooling.

At NSE Baglietto will work with a recently-formed industry-university innovation hub in which the Department is playing a leading role, the Consortium for Advanced Simulation of Light-Water Reactors (CASL), which is backed by $122 million of US Department of Energy funding. The Consortium members aim to create a virtual reactor that runs predictive simulations of new reactor designs. “The project demonstrates a large-scale US-supported commitment to the ideas I’ve been working towards,” says Baglietto. “We need advanced simulations to play a much larger role in supporting the existing nuclear fleet and in the design and licensing of next-generation reactors.”

"We need advanced simulations to play a much larger role in supporting the existing nuclear fleet and in the design and licensing of next-generation reactors."