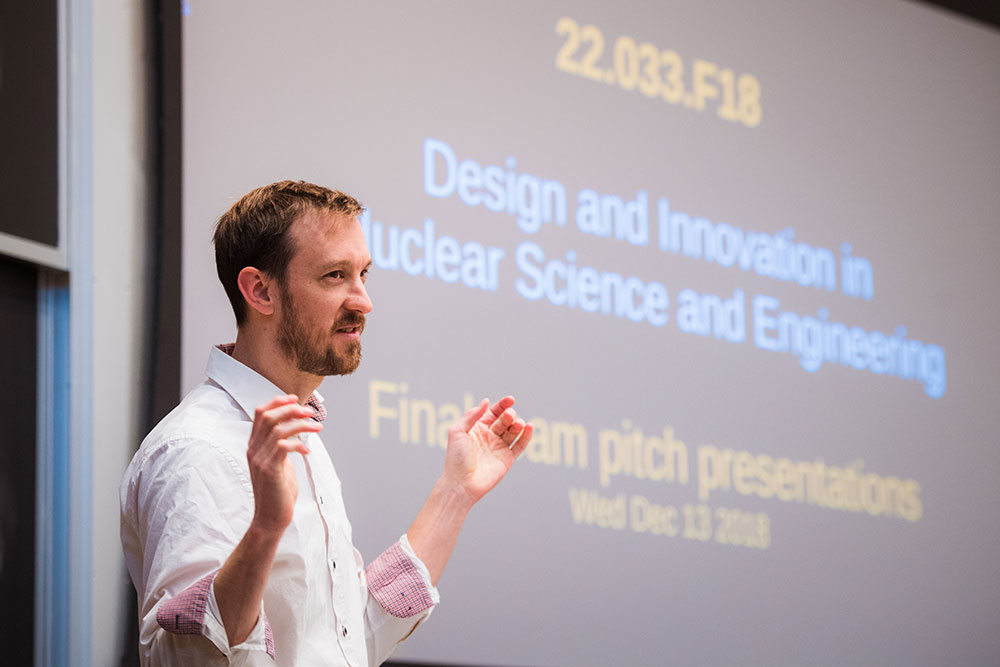 “That process of going out and finding problems may be one of the most important things we try to teach,” says instructor Prof. Zach Hartwig 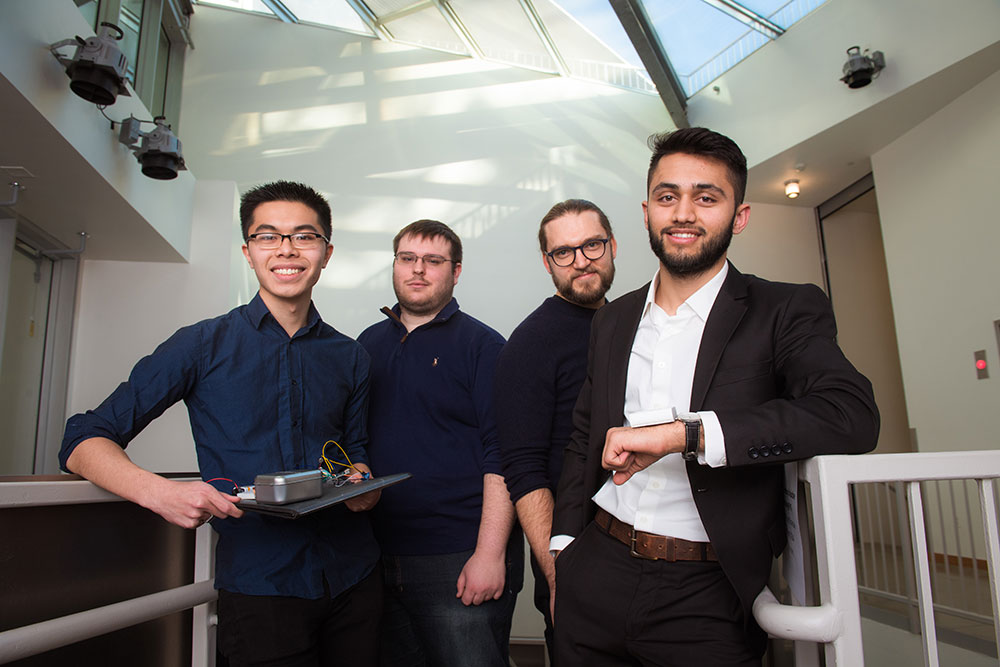 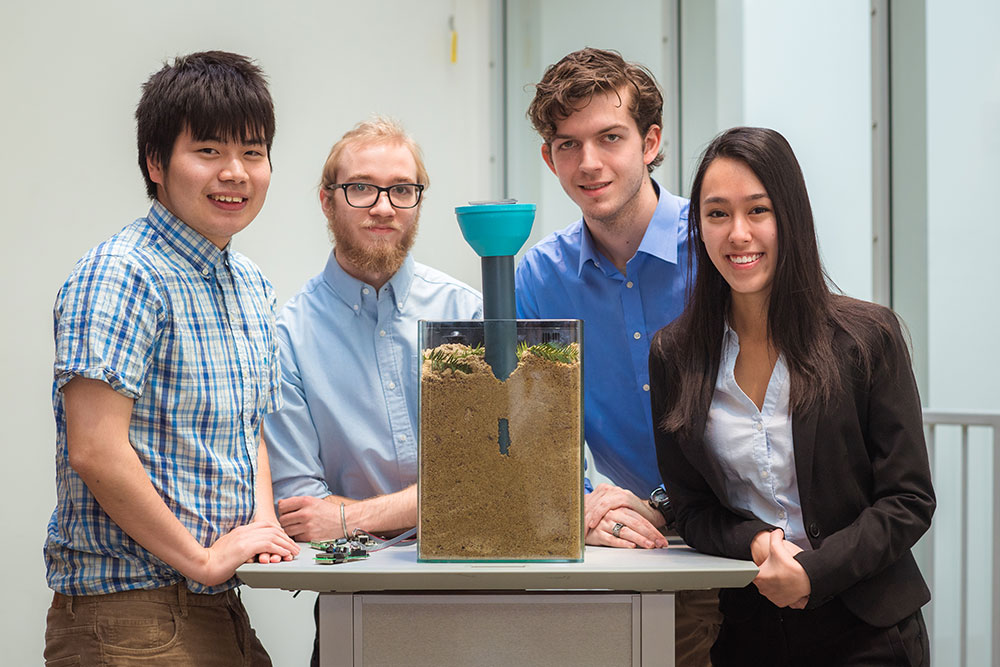 For members of the Nuclear Science and Engineering Design Class (22.033), fall semester’s final meeting on December 12th had something of a high-stakes feel.

“We’re pretty nervous,” said Jared Wilson, a senior majoring in Course 22. With four classmates and a mockup of a fast fission nuclear reactor, Wilson was awaiting the start of their team's project presentation. The anxiety-inducing format: a 10-minute pitch before a panel of expert judges. (The lucky winners would earn a free trip to Singapore in January for an international hackathon.)

22.033, packaged as a semester-long design competition, requires students to identify a significant real-world challenge and demonstrate how it could be solved in a commercially viable way through the application of nuclear science and engineering. Guided by class instructor Zachary Hartwig PhD ’14, John C. Hardwick Assistant Professor of Nuclear Science and Engineering, three teams assembled to tackle this formidable assignment.

“They interviewed people in academia and in industry to figure out what they should be working on, and how to leverage their skills to do great things,” said Hartwig. “That process of going out and finding problems may be one of the most important things we try to teach, because that’’s what you do in the real world.”

First up, before a standing-room-only audience in 32-144, was Radception—a team aiming to redefine the radiation detector. Employees in nuclear facilities or physicians working with radiological material face hazards on a daily basis and the current approaches to dealing with the dangers “don't cut it,” explained team members.

Radception’s idea: a product that straps around the wrist, offering immediate feedback through vibration as well as real-time online monitoring. Powered by lithium ion battery, the pocket Geiger module senses gamma and beta radiation, and instantly alerts the user: the degree of vibration corresponds to the magnitude of radiation present.

One judge bravely volunteered as a guinea pig. “Will this hurt”asked NSE Department Head Dennis Whyte, as a weak uranium source approached the detector on his wrist. “Wow, I felt immediate buzzing that excited the nerve in my arm!”

Radception “offers contemporary convenience, intuitive interaction, with the hope of reaching as many radiation workers as possible,” said team member and senior Kevin Tang. “According to our research, if implemented correctly a detector could reduce the possibility of cancer to radiation workers by about 23%, so there's a very big potential impact,” stated Mujtaba Jebran, a junior majoring in mechanical engineering.

The team is open to taking their project to the next level. “If that opportunity arises, we're definitely interested,” said Tang. “During the course of the semester I became more and more attached to the project—it’s our little baby!”

It would not be the first time 22.033 generated a pathbreaking, if not market-worthy, idea. In 2016, a team under then-instructor Michael Short, assistant professor of nuclear science and engineering, took on the problem of reducing carbon dioxide emissions. Their solution: irradiating plastic waste from bottles to reuse as a concrete additive.

In work the team published, they showed that gamma-irradiated plastic actually strengthened concrete, and as a fill, suggested a way of reducing global concrete production, which is responsible for an enormous volume of CO2 emissions. This idea sparked interest among industrial concrete manufacturers.

While 22.033 encourages students to pursue pressing problems like climate change, it also leaves room for students to grapple with intriguing, emerging questions. The second team, Asteroid Atomics, represented by Jared Wilson and his classmates, developed a nuclear reactor tailored for unmanned space missions.

With the strain on earth’s resources from a growing population, a budding private space industry has begun investing millions of dollars to explore the possibility of asteroid mining, the team explained. What these firms most need to harvest such rare elements as platinum is a power system to provide long-term energy for a mining operation deep in the solar system.

“We see a hard engineering problem that cannot be solved by solar plus battery,” said team members. Their solution: a reactor system using uranium-based fuel, cutting edge carbon nanotube technology and linear-actuating Stirling heat engines. Two Asteroid Atomics power systems would fit into the payload of a SpaceX Falcon 9 rocket, and according to team estimates, could function for 12 years.

After running the numbers, the team projected a cost of $40 million for one of their power systems. Given the wealth of resources in space, this kind of number might prove attractive to aspiring asteroid miners. “We hope to bring ideas of the space industry from science fiction to reality, and serve as a stepping stone for getting mankind to the final frontier,” they concluded.

Given the speculative nature of the pitch, some of the judges prodded the team on specifics, from potential safety issues to the reliability of its electrical system. But others were happy to go along for the ride.

“I had no idea that asteroid mining was a thing,” said Sarah Haig Baker, COO and co-founder of Silverside Detectors, Inc., a start-up nuclear detection firm. “I enjoyed learned something new, and it was really interesting.”

The final team, and winner of the design competition, was Neudrop. Confronting the problem of global freshwater shortage, students sought a way to husband water resources more effectively. They decided to focus on water used in agricultural irrigation, which comprises approximately 70% of freshwater resources.

Neudrop’s answer was an inexpensive soil moisture detector that enables farmers to read water needs over a large area. Demonstrating their invention with a transparent acrylic box full of sand, their detector fits in a tube easily inserted into the ground at different depths. As the team described, “We use everyday neutrons from space slamming into a hot photodiode.” The neutrons interact with water in the soil, and then the battery-powered device generates electrical feedback that can be read as a kind of moisture profile.

The Neudrop team envisioned a competitively priced detector deployed in multiple sites across a farmer’s cropland, measuring available soil moisture on a daily basis. “We will enable farmers to increase their efficiency in irrigation scheduling, saving water and expenses,”they stated.

“But it’s not only about helping farmers save money on water, it's about helping the planet and our society to save water in an environment of climate change,” said team mentor Areg Danagoulian ’99, Norman C. Rasmussen Assistant Professor of Nuclear Science and Engineering.

A sounding board for the team as it figured out both target problem and solution, Danagoulian found reason for cheer not just in the team’s success, but the larger experience of 22.033. “It really stressed the students to think creatively about a big, relevant problem, and the class gave them the skills they needed to approach it,” he said. “And overall it was a good challenge to develop an actual vision about where they think we should be going, because it will help them in the future as they routinely face just these kinds of problems.”