Advancing the field of quantum thermodynamics 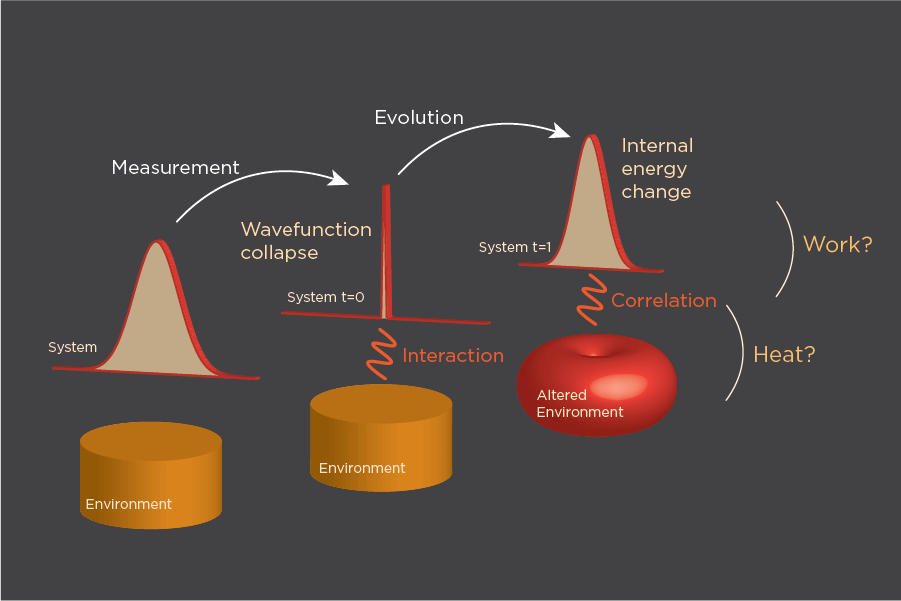 The study’s result can be seen as one solution to the open problem of how work and heat are defined in open quantum systems.

Understanding the laws of classical thermodynamics allows for many of the modern technologies we take for granted today, including internal combustion engines, electricity production, and modern climate control, to name a few. The field of quantum thermodynamics, though, is still in its infancy. One of the most basic concepts, determining the amount of heat (thermal energy) and work (kinetic energy) that is transferred between two systems, is still an open question.

In classical mechanisms, work and heat can usually be determined from some observed change in the system or the environment. Measuring temperature changes indicates heat, while looking at changes in shape, size, or location can indicate work. In quantum systems, finding quantities to measure in order to define heat and work is an important step in the development of many quantum technologies.

In a recent paper from Prof. Paola Cappellaro’s Quantum Engineering Group (QEG) published in Physical Review Letters, a theoretical framework for determining accurate estimates for the work and heat of a generic open quantum system is presented for the first time.

This work, written by Akira Sone PhD ’19 (now at Los Alamos National Laboratory), NSE graduate student Yi-Xiang Liu, and Cappellaro, builds on theories which have been able to determine work in closed systems (those that have no interaction with the outside environment) and specific examples of open systems.

These previous solutions, however, could not be uniformly applied to all quantum systems. According to Liu, their new methodology can be applied to any source, “basically everything that can interact with the system, that could exchange energy with the system.” By being more generic, their result can be more broadly applied to a variety of real-world quantum problems.

One of the challenges to making these measurements is the nature of quantum systems. Only certain quantities, called observables, can be directly measured.

“Energy is a well defined observable,” says Liu. “If the system is in a different state, the actual energy you measure will be different. Heat and work describe processes rather than an instantaneous state, and so it is hard to define the corresponding observables for heat and work in a quantum system.” Because of this, researchers must find ways to define heat and work based on measurements of energy, similarly to how measurements of temperature or pressure might be used in a classical system.

Unlike in classical systems, however, taking measurements in a quantum system has an effect; in particular, correlations between the open system and the outside environment can be lost. Previous studies have used a system that involves taking measurements at two different times, but, according to Sone, “due to the interaction/coupling with its surroundings [in an open system], information about the system is lost. This is known as decoherence, which is the major challenge in today’s quantum technologies.”

The team from NSE developed a methodology that avoids this problem. Using their formulation, accurate guesses of the work and heat of the system after interaction with an external source of energy can be determined from one measurement, taken prior to the interaction.

Additionally, having complete knowledge of the environment of a real quantum system is unrealistic. “In the real world, we cannot obtain complete information about the system and its surroundings,” said Sone and Liu. By only needing to know the state of the system of interest, and not requiring information about the external conditions, this methodology is much more viable in real-world applications.

While Liu is still in the process of planning experiments that aim to validate the theories that the team proposed in this paper, this theory is a promising step towards a better understanding of the thermodynamics of quantum systems.

These results will allow quantum systems, including quantum computers and quantum heat engines, to be modeled and predicted with more realistic results, enabling further development of these technologies. By giving accurate guesses, “our theory can provide some bounds on how much useful work you can actually extract from the system,” says Liu.

This work was funded in part by the Army Research Office’s Multidisciplinary University Research Initiative and the MIT International Science and Technology Initiatives.

Written by Leigh Ann Kesler. Image by the researchers.